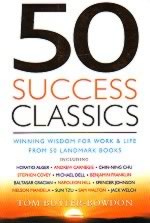 I don't often feel compelled to recommend a book before I'm even a quarter of the way through it, but for 50 Success Classics, I'll make an exception.

I'm an avid audiobook listener. I commute half-an-hour each way, which gives me five hours of “reading” time each week. In the past, I've stuck to classics and to nautical fiction (I'm a huge Patrick O'Brian fan), but recently I decided to check Audible‘s stock of self-development books.

The first book I downloaded was 50 Success Classics by Tom Butler-Bowdon. Wow. Here is a book I wish I had written. Its concept is simple: Butler-Bowdon selected fifty important books from success literature. For each, he has created digest versions, summarizing each volume in only a few pages, distilling its key points. He has also provided biographical information on each author, and attempted to explain why each book is relevant, placing it in a larger context.

In two days, I've listened to Butler-Bowdon's coverage of seven books. I've been introduced to Horatio Alger. I've been given a brief history of Warren Buffet‘s life. I've been reminded that my beliefs shape my reality. This is great stuff, and I am confident the rest of the book will provide more of the same.

(Butler-Bowdon has made a career out of books like this: his 50 Self-Help Classics and 50 Spiritual Classics also have five-star ratings at Amazon. The 50Classics web site promises a new volume in an undisclosed genre this October.)