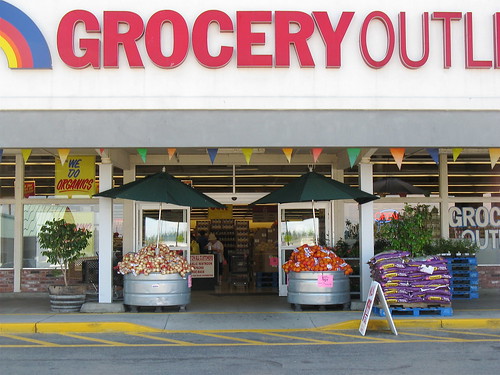 About a mile from my house there's a slightly shabby strip mall housing a Dollar Store, a Ross Dress for Less, and something called a ‘Grocery Outlet'. For two years I've driven past that sign — on my way to Costco, Fred Meyer, and Trader Joe's — without ever giving it a second thought. I'll pick through thrift-store racks for clothes, sure, but I'm a snob about food, and ‘Grocery Outlet' smacked of discards and dregs.

After six months of only part-time employment and a pared-down budget, though, I start eyeing the sign more speculatively. One day I gather up my cloth bags and my determination and head over to expand my grocery comfort zone.

Inside the Grocery Outlet

The building is old, with scuffed tile floors and aged metal shelves. The shopping carts are battered cast-offs from other stores. But the lighting is bright and everything is clean. The warehouse-style setup, stacked cardboard boxes cut open for access to the cans and boxes inside, is familiar to anyone who shops in a club like Costco or Sam's. My fellow shoppers are a cross-section of ages, races, and economic classes; the only thing I don't see is someone in a business suit. That's typical of Seattle, though — not even Whole Foods gets customers in suits.

Making the circuit of the store, I discover all of the categories that one might expect from any supermarket — canned goods, produce, dairy, snacks, frozen foods, household cleaners, beauty products, paper goods, pet food, vitamins, and so on. 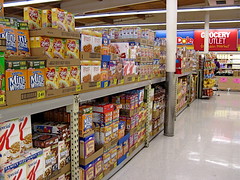 Only the service counters, like seafood and deli, are absent. Everything is well-organized by type and the displays, while low-tech, are tidy. Some of the items are there for obvious reasons, like dented cans or corner-crushed boxes; others are a mystery. I warily check ‘best-by' dates but find nothing alarming.

I recognize a lot of brand names, but there are unknown labels too. I am surprised by the number of ‘organic' offerings, bemused by the aisle of random toys, and startled again to see a wall of discounted wines. The cheapest is $2.99 but some are close to $20 per bottle; I am not enough of a wine connoisseur to assess the savings. I do take home a German Riesling for $3.99. It turns out to be quite good, at least to my uneducated palate. When I come back the next week there are only three bottles left; I hoard them all.

The Island of Misfit Foods

Imagine a grocery store that sells only loss leaders, and you'll have a pretty good idea of what shopping a salvage store is like. There are no ads, of course; every visit is a surprise. A Seattle Yelp contributor calls Grocery Outlet ‘The Island of Misfit Foods,' which is as apt as it is funny. Most of the offerings are one-time bargain purchases; once the current stock is gone it's replaced with something else entirely. One week I snagged two cartons of perfect large organic brown eggs for 99 cents per dozen; another time they had no eggs at all. The ice cream selection might be pints of Ben and Jerry's or something labeled in Spanish.

This particular store is clearly making an effort to function as a regular grocery by keeping certain staples — such as milk, cheese, a cross-section of produce — always available. Prices for these items are equivalent to common grocery loss-leader or sale prices ($1.99 for a gallon of milk, $1 for a one-pound bag of pre-cut carrots). One oddity is that all produce is sold by the piece, with no scales in sight, making it difficult to compare loose items like broccoli or squash that are elsewhere priced by the pound.

There's a clear distinction between what I'll call the ‘stock' produce and the ‘deal' produce, however. ‘Deal' produce comes in much greater quantities and rotates as unpredictably as anything else in the store, and can be a much better value. 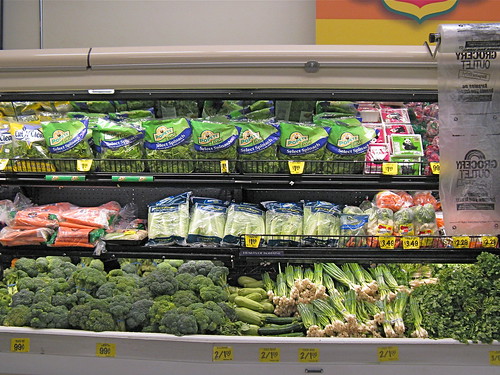 As you might expect, produce is also the most hit-and-miss category, quality-wise. I saw avocados that looked nearly mummified, and bought jalapenos that tasted like bell peppers, inexplicably lacking any hint of heat. On the other hand, I found perfectly good red, orange, and yellow sweet peppers at 50 cents each, which knocked my socks off. (For comparison, the best sale I've ever seen was $1 each, and $2-$2.50 is typical.) I walked in last week just as they were setting up a luscious display of Driscoll's organic raspberries at $1.50 per 6-ounce carton. I don't usually pay the premium for organic groceries, but this was a steal, comparatively: later that day I saw the exact same size and brand at a regular grocery for $4.49.

If you also shop a warehouse club and have the ability to store large quantities, you'll find that some items are still cheaper that way. Grocery Outlet has one-pound bags of frozen edamame for $1.29; I buy a 6-pound bag at Costco for $6.99, or $1.17 per pound. It helps if you keep a price book (or have an exceptional memory).

My grocery needs skew heavily toward fresh and frozen items and away from the ‘shelf-stable' cans, bags, and boxes that of course make up most of a liquidator's stock, but I've found plenty of pantry items I could use: cans of olives, vegetable broth, Heinz ketchup, a box of Kashi cereal at $2.49. Right after I started making my own bread I found five-pound bags of whole wheat flour for $1.99 each, 46% cheaper than the best local grocery price.

I don't see Grocery Outlet wholly replacing any of my current stores, but it's earned a solid place at the front of the rotation. I'm accustomed to checking the loss leaders and produce sales each week, then planning meals around what's cheap; this is just an extension of that strategy. A chat with an employee reveals that my store gets shipments on Mondays and Fridays; produce and frozen foods come in Monday morning and are on display by early afternoon.

How do you find an ‘Island of Misfit Foods' near you? In the western states, try Grocery Outlet's web site. Otherwise, gnivas.com has a list of salvage food stores organized by state. (Call ahead though, as some of the listed stores have gone out of business.)

If neither of these turn up something in your area, don't give up — there are thousands of independent stores not listed here. Try searching the web for your location plus ‘grocery surplus', ‘grocery salvage', ‘banana box', ‘discount grocery', or — if you live in Ohio, Pennsylvania, or Indiana — ‘Amish grocery'.

Most grocery liquidators are independently owned, and even the chains like Grocery Outlet are independently operated franchises. So your local store may be quite different from mine. It's worth checking out, though, even if you're a food snob like me.

Karawynn writes about personal finance at Pocketmint. Karawynn has been blogging since before “blogging” was a word.

There are 84 reader responses to "A visit to the island of misfit foods".