Growing up, my parents taught me very little about financial responsibility. It wasn't until college, when my parents expected me to pay my own car insurance, that I was forced to learn the basics of budgeting. It was just one bill, but it was traumatic to me since I'd never paid for anything myself until that point. Looking back, the lesson was introduced too late. It didn't “take”.

Had I understood budgeting earlier in life, some of my financial choices might have been different. Obviously, this isn't the only reason I accumulated a mountain of debt, but it's an example of the lack of financial education I received as a kid. (Fortunately, now thousands of dollars in debt are gone after a lot of planning and sacrifice — and of course, using coupons.) My husband and I want to teach our boys smart financial habits at a much younger age than we learned them.

An 11-Year-Old's View of Money

For Christmas, our 11-year old son, T, wanted wanted a cell phone. Actually, when the new iPhone 4G hit the market, he suggested that he could take my 3G to use so I could get the new 4G. (His generosity knows no bounds!) While his suggestion gave his parents quite a laugh, we seized the opportunity to teach him a financial lesson. Here's a bit of that conversation:

s Christmas rolled around, T kept mentioning the cell phone. He really wanted it. So, we sat down and had a more detailed discussion about budgeting.

Since the cell phone would be T's first and and only bill, we talked about his cash flow. He makes $44 a month for doing his chores (with potential to make more money each month for doing other things). We broke down his current expenses. I know he's only 11 years old, but we really wanted this lesson to impress the importance of budgeting and giving.

I suggested that if he could find a phone plan that cost 50% or less of his monthly income, we'd consider the phone. The only limit to his search was that we needed a monthly payment plan without a contract. If he didn't pay, we didn't want to be bound to a contract we were paying for and not using. No payment means he simply wouldn't have a phone to use (after all, a cell phone is a want and not a necessity). 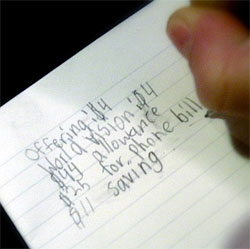 Being eleven years old and not knowing how to find the information, I came up with a list of websites for him to review (with my guidance for some online safety measures). He browsed the sites, wrote down options, and noted which carriers offered a monthly service plan option.

After his review, he gave me his analysis and recommendation. I wasn't surprised at the suggestion since I'd done some preliminary research myself. The lowest monthly payment plan was $25, and it did offer the monthly payment option that we required. Even though this was $3 over his $22 budget, we decided it was the best financial option meeting the requirements.

As we were going over the numbers again with the $25 cost, we discussed all of T's expenses that his $44 monthly income was expected to cover. During this talk, we reminded him about tithing, and ensuring that 10% of his income is set aside for our church.

T's response to this didn't surprise me: “That's easy. I make $44 and will spend $25 on my phone bill. That leaves me with $19. So 10% of $19 is $2.” While I appreciated his stellar math skills, we also took the time to remind him that the 10% giving was before he paid any bills. For us, that lesson was equally important in his understanding of financial generosity.

Going through this budgeting process was eye-opening for all of us. While some parents are worried about having “the talk,” I was equally concerned with having this budgeting talk. This was a great lesson to teach T, but we hope that dad's jacked up car and his first-hand look at poverty also show him reasons why we make the choice to manage our money wise in the first place.

Maybe 2011 is the year you take control of your finances and say good-bye to debt. For our family, 2011 is the year that we, as a family unit, focus on financial responsibility. And it started by teaching an 11-year-old how to budget for a cell phone.

Andrea Deckard publishes Savings Lifestyle, a website that helps people save on what they need so they can spend on what they want.

View all posts by Andrea Deckard

Want to save the environment? Buy less stuff!

How to shop at an estate sale

Your Personal Board of Directors