An angel on one shoulder and a devil on the other

We received a Costco coupon book in the mail today. Costco — a membership warehouse store — has very low prices and generally does not take coupons. A few times a year, though, they send out flyers with special discounts.

Kris flipped through the book first, clipping coupons for kleenex, cat litter, and ziploc bags. When she was finished, I picked it up to look for things she'd missed.

“I've got to stop looking at this,” I said, tossing the coupon book aside.

“It's making want things I don't need. It makes me want to buy junk food and DVDs,” I said.

I thought for a moment. “How can you look at that book and just clip coupons for the things you need? How come when I look through it, I'm tempted to buy things that I know I shouldn't. I don't need jelly beans.” 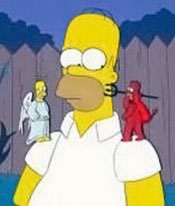 It's like those cartoons where our hero has a devil on one shoulder and an angel on the other, except my angel speaks too softly.

Over the last two years, I've become better at ignoring the devil and listening to the angel. In fact, most of the time I don't even let them begin to argue. When something tempts me, I move on: I leave the store, I close the web site, I set down the coupon book. When I sense myself slipping into old thought patterns, I try to remove myself from the situation so that I'm never actually forced to make a choice.

The best part of this isn't that it prevents me from spending money. The best part is that I'm no longer burdened with the guilt that comes with compulsive spending. If you've ever been a spendaholic, you're probably familiar with the knot in the stomach that comes from buying something you shouldn't. You want it on an emotional level, even though your brain is telling you it's a poor decision. I don't have that any more. For the most part, I avoid irrational purchases. And because I'm not spending money, I'm not beating myself up over stupid choices.

Now when I buy something for myself, it's a planned purchase. I know I can afford it. Even when I indulge myself, it feels good because I don't have to feel guilty. And that, my friends, is why I won't be bringing home a four-pound container of jelly beans.

How will the coronavirus affect your personal finances?

Hourly vs. salary: Which is better?