An introduction to the crossover point

Trent at The Simple Dollar recently wrote about the Crossover Point, a notion popularized by the book Your Money or Your Life. The Crossover Point is simply that point in time at which your investment income exceeds your monthly expenses. For most people, this never occurs.

YMoYL is about getting readers to the Crossover Point. The authors want people to achieve Financial Independence, which they define as “having enough — and then some”. They ask readers to track income, expenses, and investment income, plotting each of these on a wall chart. The entire book is about finding ways to get the investment income line (low on the graph) to meet (and then cross over) the expenses line. 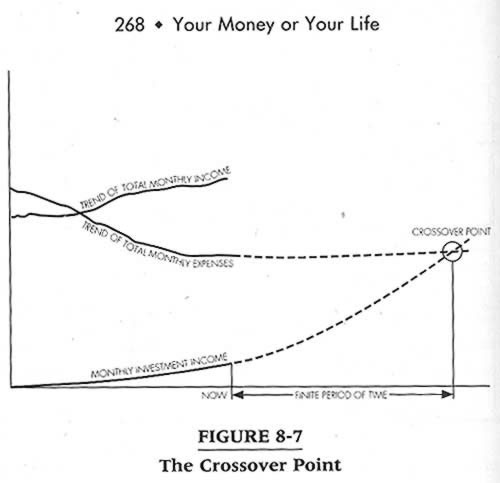 This is esoteric, I know, but it's important. Reaching the Crossover Point means that, if you wanted, you could stop working for money. You could retire. You could work for self-fulfillment. You could travel the world or write a book. If YMoYL were a novel, this would be the climax of the story:

The Crossover Point provides us with our final definition of Financial Independence. At the Crossover Point, where monthly investment income crosses above monthly expenses, you will be financially independent in the traditional sense of that term. You will have a safe, steady income for life from a source other than a job.

But how can you find your Crossover Point without a lot of fussy calculations? Ryan Stewart dropped a line to share a web app he developed that allows users to play with the numbers. He writes:

I recently read a post on The Simple Dollar that reintroduced me to the ‘crossover point.' (I first read about it in Your Money or Your Life in 2001). When reading the post I thought, “I wish I had this spreadsheet so I could see what my crossover is.” So, I did what any self-respecting geek would do and I created an online calculator for the world to see! I thought I'd share it with you (and hope you'll share it with your readers).

In many ways, the Crossover Point is just a fancy way of saying “Retirement”. If you've never played with a retirement calculator before, take some time to play with Ryan's crossover point tool. And then — if you haven't already — go borrow Your Money or Your Life from your public library.

I'm curious if any of you are actually following the YMoYL program, graphing your monthly income and expenses. Have you begun tracking your investment income? What's it like to see it climbing toward the Crossover Point?

The best time to buy almost everything

Using mini-retirements to get more out of life: An interview with Timothy Ferriss

Student loan repayment and the ethics of personal finance