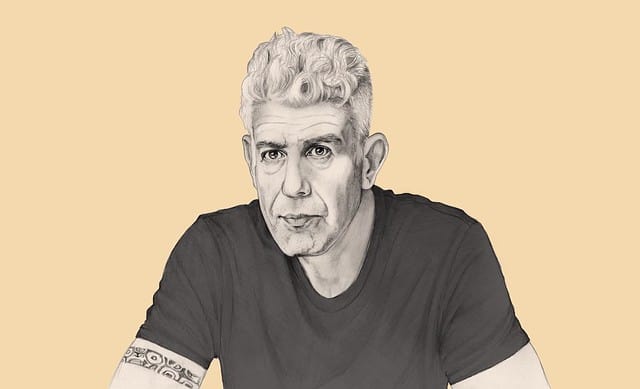 I'm a huge fan of Anthony Bourdain. The dude loves life and lives hard — and shares it all (good and bad) candidly. Often in the evening, as Kim and I eat dinner, we'll watch an episode of Parts Unknown, which is ostensibly about travel and food but actually about the human condition. It's great stuff.

As part of their excellent Money Diaries series (“interesting people talking candidly about money”), robo-advisor Wealthsimple interviewed Bourdain about his relationship with money.

“My parents were not good with money,” Bourdain says. “They bought things they couldn’t afford.” When they did have money, they spent it instead of saving. As a result, his money blueprint was faulty from the start.

Bourdain shirked work. What money he did earn, he spent on drugs and other forms of entertainment. “I didn’t put anything aside, ever,” Bourdain says. “Money came in, money went out. I was always a paycheck behind, at least.”

Nowadays, things are different. Over the past twenty years, Bourdain has turned things around: “I am fanatical about not owing anybody any money. I hate it. I don’t want to carry a balance, ever. I have a mortgage, but I despise the idea.”

Like most of Bourdain's work, the entire interview is golden. (And while you're at Wealthsimple, check out other installments in their Money Diaries series, including interviews with Elizabeth Gilbert and Kevin Bacon.)

Is the GRS forum gone?

Love Anthony Bourdain and especially this money diary. So many great quotes. This one’s a keeper. Thanks for sharing! PS At the risk of repeating myself, congrats again on the buyback of GRS. I loved the original GRS, loved MoneyBoss, and this site so far seems to be the best of both worlds. I’ve been reading PF sites since around 2005/2006, and you were always a favorite.

J.D. – Bourdain is awesome. Could you imagine how crazy it would be to throw back a couple drinks with him??? Thanks for the link to his interview (and the others I read).

I loved this. Also check out Hasan Minahj, where he talks about investing in himself rather than others.

Great site, thanks for the link!