The Federal Reserve has lowered short-term interest rates twice in the past week by a total of 1.25 percentage points. (They lowered the federal funds rate, not the prime lending rate, though that falls in lockstep with the former.) Many people are excited because they believe this will lead to lower rates on fixed-term mortgages, meaning the average person may be able to save big bucks by refinancing. One GRS reader wrote yesterday to ask:

The feds cut rates again this afternoon. I would like to know if this means it may be a good time to consider refinancing my primary residence. I'm currently locked at 7.0% for 30 years.

This is a great question, one that I've had, too. But my research revealed something surprising. Contrary to popular belief, the federal funds rate does not directly affect mortgage rates. (Not even adjustable rates, from what I can tell.) According to Bankrate:

Mortgage rates have declined dramatically over the past several weeks. But the Federal Reserve's latest rate cut does not guarantee that rates will keep dropping. In fact, mortgage rates often climb following a cut in the federal funds rate, and actually rose about 50 basis points after the Federal Reserve announced its emergency 75-basis-point cut Jan. 22.

That's right: the Fed cut rates by 0.75% last week, but mortgages climbed by 0.50%. Mortgage rates are affected by 10-year Treasury Bills. Take a look at this graph from HSH Associates: 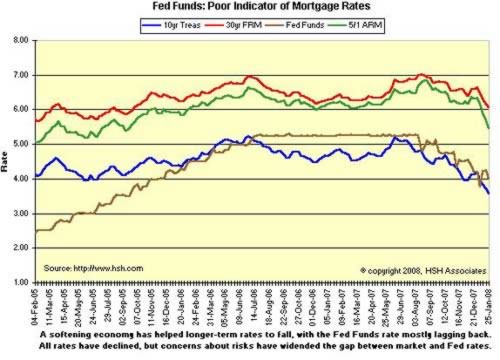 That chart may be a little difficult to read. This one from Bankrate is not: 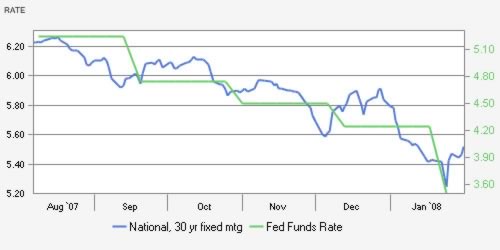 Then what does? According to an HSH Associates article on the subject, the answer is complex. “Fixed mortgage rates, like other bonds, track US Treasury bonds quite well,” the authors write. However, they're quick to add, “There is no specific ‘lockstep' relationship between Treasuries of any term and fixed mortgage rates.”

GRS reader JerichoHill is an actual economist. When I asked for his comments, he noted, “Thirty-year rates are largely affected by the supply and demand of funds available for long-term loans, and by the anticipated inflation rate. If the Fed's moves lead to expectations of higher inflation, guess what that would do? Raise mortgage rates!”

Now may or may not be a good time to refinance your home. But don't count on a drop in the federal funds rate to yield a corresponding drop in mortgage interest rates.

There are 26 reader responses to "Are mortgage rates tied to the federal funds rate?".