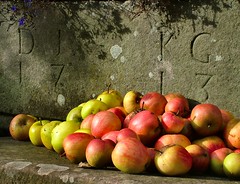 It's been a while since we touched on the subject of windfalls: money that unexpectedly falls into your lap. It's been so long, in fact, that I've started to receive questions about them, including this one from Aaryn:

I wanted to get your advice as far as the distribution of windfalls. Would you put a certain percentage in a savings account? Invest it? Keep some in your regular checking account? What is your recommendation? Would this fall in line with the balanced money formula?

Though I've written about windfall management before, it's been almost eighteen months since the last time we discussed it. At that time, I didn't know anyone who had experienced a sizable windfall. Now I do. My friend Joan inherited a large sum of money earlier this year, and I've been able to watch first-hand how she's handled it.

The first thing Joan did was set aside money for taxes. Depending on how big your windfall is, you may not need to do this. You'll owe them, of course, but if your windfall is just $100 or $1000, you can probably scrape the money together at the end of the year. But if your windfall is $100,000 (or $1,000,000!), you should set the money aside immediately. I think Joan put her tax money into a money market account.

Next, Joan chose to use a little of the money to treat herself. She redecorated her house, which is something she's been wanting to do. I know this project cost quite a bit, but I'll bet it was still just two or three percent of her inheritance.

I thought Joan would invest the rest of her new-found wealth right away, but she didn't. She let it sit in savings for a few months because she was scared to make a wrong move. She'd never had a lot of money before. Finally, she interviewed some investment advisers in her hometown, and she chose one that she felt comfortable with. She sought professional help. Now that she's had time to let the emotion drain from the situation, she's ready to invest.

Joan was fortunate in two regards:

Joan was also lucky to have received a large windfall. What if her inheritance had been smaller?

I've experienced many small windfalls in my life, and I'll bet you have too. I used to get a windfall every spring when I received my tax refund. And, like clockwork, that windfall would vanish through my fingers just a few days later. (That's one reason I no longer aim for large tax refunds.)

More recently, I've found better uses for “found” money. When I was working to get out of debt, I'd apply my windfalls directly to the balances I owed. Over the past two years, I've used windfalls to build my savings, and then to save for my goals. I still follow a personal rule of thumb that I can use 5% of every windfall for fun (so, $5 out of $100, or $50 out of $1000), but the rest of the money is applied immediately to my personal financial goals.

I find it exhilarating to fund my Roth IRA early in the year because I've been diligent with the little windfalls. And, of course, my Mini Cooper was purchased almost entirely with small- to medium-sized windfalls. When you don't fritter them away (as I used to do), windfalls can really turbo-charge your savings.

Have you ever experienced a large windfall? Inherited money from Aunt Madge? Won the lottery? Sold a business? How did you handle it? Would you make different choices now? And what about small windfalls? All of us receive those. What do you do with yours? What advice do you have for somebody who receives a windfall?

There are 80 reader responses to "Ask the readers: How to handle a windfall?".