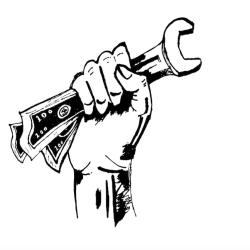 The Financial Mechanic is a software engineer from Portland, Oregon. She sometimes does crazy stuff in the pursuit of Financial Independence...like selling her car and downsizing her home from 1000 square feet.

When I sat down to take my AP Computer Science exam at the end of high school, I knew it would be bad. As a class, we had no idea what we were doing for the entire year. Our teacher was in his last year of teaching and had already given up on us.

We entered the gym hopeless, a ragtag bunch made up of students who really just wanted to avoid taking statistics. The test began, and immediately three boys in the first row put their heads down for a nap.

I stared blankly at the first free-response question:

"Recorded sound often begins with silence. Write the method trimSilenceFromBeginning that removes the silence from the beginning of a song."

If Spotify were trying to get free labor from high school students in a hot gym, pencils scratching desperately, they were out of luck. I gave each question a half-hearted attempt, then passed the rest of the time writing sonnets in iambic pentameter. (At least they were computer science related!)

To my utter lack of surprise, I received the lowest possible score.

Based on this experience, I could have easily concluded that coding wasn’t for me. Maybe I didn't have a "logical" brain since it just didn't click with me. Maybe instead I should major in something that came easily to me, like psychology or English. I could have left computer science to someone who was naturally good at it, writing open source software in her free time and geeking out over dependency injection.

Today, I am a software engineer because I didn't just "follow my passion". I made it happen.

There are two theories about following your passion when choosing a carrer.

It might be slightly less inspirational shouted from the rooftops — “Do whatever. If you work hard, you will like it eventually!” — but the growth theory is great news for those of us who fail something the first time. Rather than waiting around for passion to show up, we can take matters into our own hands and make our own passion.