Back to the stone age: Low-tech expense tracking 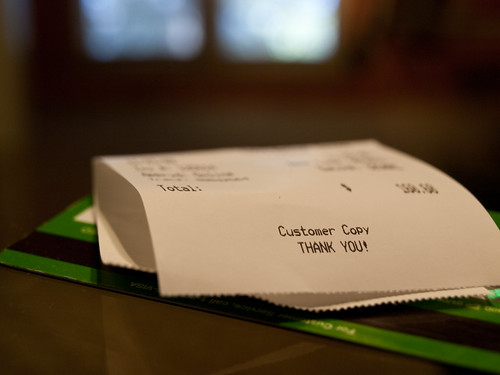 As many of you know, before I was a GRS staff writer, I was a GRS reader and active commenter. I'd say the bulk of my early personal-finance education came from this website, and it's most definitely the resource I credit for spurring me to get serious about paying off debt and saving money.

So last year when J.D. started talking about falling off the tracking-every-penny wagon, I winced. I haven't been tracking my spending, either. Ever since our income went up last year, I've been satisfied that we're saving enough — more than 55% of our income. We have no debt, we have targeted accounts for irregular expenses, and we pay our credit card bill in full every month. We're definitely doing well, but the more J.D. wrote about getting Tracking for peace of mind
Like J.D., I don't like the “financial black box” of not knowing where our money is going. Did we spend more on groceries than usual this month? Approximately how much are we spending on gas? I have no idea!

I don't need to account for every penny, but I'd like a general idea of how we're doing. It's too easy to dismiss expenses because we're doing relatively well with our savings, or because we forgo a lot of extras like cable TV and eating out regularly.

Also, it's less fun to spend money when I don't track it. I believe that money is a tool, and that some of it should be saved for the future and some of it should be enjoyed now. But when I'm not exactly sure how much “fun money” we've been spending, it's harder to enjoy spending it. Last week, for example, I made a couple of purchases and felt a little buyer's remorse, but only because I worried that I was forgetting about other expenses. If I knew we'd allotted, say, $200 to freely spend, and I was within that limit, I wouldn't have given the purchase a second thought. I could have just enjoyed it.

I've tried more than once to stay on the money-tracking bandwagon. I tried Quicken, but it did so much more than I needed it to do and categorizing each expense and reconciling accounts got tedious (maybe the newer versions are more user-friendly?).

I tried Mint, but some accounts wouldn't update, and there were major glitches that threw off my numbers in a big way. For example, my “personal items” category, which is under $50 each month, mysteriously showed more than $400, but when I tried to view the itemized expenses, the system would time out. When I added it up by hand, it was nowhere near $400. I contacted customer service, but after weeks of waiting, there was no fix and no help, so I quit using Mint. I tried again several months later, but one of my accounts updated so rarely that, again, it wasn't worthwhile.

I feel like I've spent far too much time downloading, uploading, troubleshooting, and e-mailing customer service reps. Tracking my money does not need to be this complicated (though I thought using technology would simplify the process). No wonder I keep dropping the habit — it's been tedious and time-consuming!

Starting February 1st, I decided I'd track my expenses again, but this time, I'm keeping it simple. No software, no web, no syncing — just a small notebook tucked in my bag. In it, I have a page dedicated to each spending category (groceries, gas, bills, etc.) and on each page I record the following information about each purchase:

I plan to keep the spending categories broad, since all I'm after is a general idea of where our money is going, and since a complicated system doesn't seem to work for me in the long-term. I think that's the key: Experiment until you find a system that works for you. That's the only way you'll stick to it. I quit when I got tired of uploads and downloads or when I encountered a glitch. But finding the right system takes trial and error, and I gave up too soon on something as important as tracking my spending.

I'm feeling good about the new plan, and I'll report back after trying it out for awhile. Until then, what different methods have you used to track your expenses? What systems did you drop, which have you maintained, and why? And, more to the point, do you have any tips for low-tech expense tracking like I've been trying to do?

Ask the readers: Can you use positive reinforcement to train smart money habits?