Beating the high cost of weddings: How we did it, and how you can too

Written by Guest Author
|
|
No comments

Think you need to spend a fortune to tie the knot? It's just not so. Kris and I got hitched for a couple grand in 1993. In this guest post from JerichoHill, he explains how he kept costs down for his wedding last summer.

Weddings are expensive affairs. Couples often spend tens of thousands of dollars for an event that lasts only a day or two. I know, I know — the memories last a lifetime. But that's the catch-phrase of the industry that's sprung up around this occasion. In economics, this is called conspicuous consumption.

Ramit at I Will Teach You to Be Rich recently wrote an article about the cost of weddings. On average, a wedding costs $28,000. That's more than half what the typical American household earns in an entire year!

I was married two months ago. Spending a lot on our wedding was not an appealing option, especially since we're building a home addition at the same time. We managed to spend less than $10,000 on our wedding. You can have all the grandeur of a big wedding on a small budget. Here's how we did it, and how you can, too. 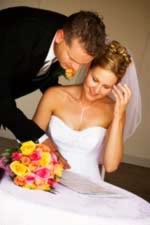 We decided that instead of hiring a photographer, we'd ask our friends and family to bring their digital cameras. Two of our friends are amateur photographers and were thrilled with a chance to use more fancy equipment for the wedding photos. One came armed with the latest techno gadgetry; the other came with an old-style camera (and I mean old-style!). Both friends had an absolute blast taking pictures.

For our reception photos, we asked that everyone take pictures of whatever they fancied, as we figured each social group at our wedding would take plenty of pictures of themselves. When guests left, they simply transfered their pictures onto our laptop computer, which was as easy as sliding the memory card into the appropriate slot and copying the files to our specified folder (which we made obvious).

By asking our friends and family to take pictures, we knew we'd get a lot of good variety, and perhaps a few more comical poses. We were able to pick and choose which to put in our own (free) online wedding album. Our friendly photographer posted the wedding album to PicasaWeb, and linked to a photo-making service so that guests could make prints of the photos they wanted. He added the pictures our friends took to the album, as well.

Most colleges have a chapel, which is usually quite nice. Often, alumni of the college can use the chapel for their wedding, free of charge. During the planning stages, my fiancee contacted the chapel administrator at her alma mater. She filled out a few forms, and we had a nice place for a wedding for free because she was an alum. It was beautiful, but was even more meaningful because of her history!

We weren't picky about the type of religious ceremony we were married under. We were happy to be married by a friend of my wife's family, who was licensed to perform marriage ceremonies. This added a personal touch. Another family friend was a retired organist, so he performed at our wedding. A deeply religious friend was honored to read from the Bible. Everyone did a marvelous job.

Renting a reception space is ghastly expensive. Why not have it at your home? My wife's family welcomed the opportunity. Even though the reception was large, we found a way to make their space work.

Not only does having a reception at home save thousands on renting a space, but it can provide impetus for some much-needed home improvement! The money you would have spent on rent instead becomes new paint, a new patio, or dozens of other improvements that stay with your family after the big day has passed. For our reception, my in-laws' house was repainted, the patio was re-laid, and the surrounding yard trimmed, pruned, and looked wonderful.

For music at the reception, we had an iPod loaded with tunes. We set that up to run into a speaker set, which an A/V friend of ours hooked up. When we had to interrupt DJ iPod for toasts, cake cutting, or our first dance, we used a switchboard from the local electronics store (very cheap). Otherwise, we hit the party shuffle, and off we went! Thanks, DJ iPod!

We used a small restaurant and kept the rehearsal dinner invitations to main family members, the wedding party, and wedding officials. We met everyone else who came in that night at a local watering hole afterwards. I've been to some rehearsal dinners that were 60-100 person affairs. I can't imagine how expensive they must have been!

For alcohol, we compared the restaurant's wine prices with its corking fee. We found out that it was cheaper to pay the corking fee and just bring our own wine. After the rehearsal dinner, we had a night-time hangout spot lined up (a local bar/pool hall) where we could hang out with the younger crowd (that we couldn't invite to the rehearsal).

Catering is also expensive. We couldn't believe how much it would cost for a large reception. Instead, my mother-in-law got creative with some foodstuffs from our local Costco. She enlisted the help of a women's social club she belongs to — they had a good time getting creative on recipes. Folks marveled at the shrimp the ladies prepared — shrimp that was bought in bulk from Costco.

I dressed my groomsman in black suits, since the occasion to wear a tux is normally few and far between. Since they had (or bought) the suit, I bought them matching ties and kerchiefs as their wedding party gifts. My wife was able to use her sister's wedding dress, and I used an old family tuxedo. (Both fit us very well.)

These are just some of the many ways we reduced the costs associated with our wedding.

Our frugality led to creativity. We added a number of personal touches to the event, and our friends and family were able to help shape and sculpt our wedding day. Wedding memories aren't made from expensive cakes, but from the oddest of quirks. (We'll remember most our officiant's wife telling him to speak up as we started our ceremony.)

Utilize your connections. Reach out and draw upon the community that you grew up in, and you might be surprised. With a good social network and some creative thinking, weddings do not need to be expensive affairs. (Unless you want them to be!)

The secret to making extra money with eBay

For fraudsters, no target too small

The marginal utility of money