My colleague Trent Hamm from may have started his blog six months after I did, but he's ahead of me in books. He published his first 365 Ways to Live Cheap! [my review], at the end of 2008, and his second, The Simple Dollar, was released this summer.

I'm a huge fan of The Simple Dollar (it's the only personal-finance blog I read regularly besides my own), and I count Hamm as a colleague and a friend. I think there's a lot of value in his new book, especially for readers who are financially flustered and ready to change. That said, I think The Simple Dollar (the book) has a serious flaw. 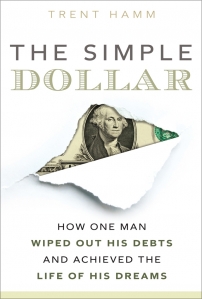 I usually save my complaints about a book until the end of a review. I'm not going to do that here.

My chief beef with The Simple Dollar is that it's disorganized. For most of the book, there's no central thesis, and the chapters jump from one topic to another with no discernible pattern. There are chapters on social capital, networking, and relationships, for example, that might make sense when strung together. Instead, they're peppered throughout the book in what seems like random order.

This makes The Simple Dollar tough to follow. I'm reading about cash flow and frugality, then the book turns to networking and careers, before jumping back to saving and investing, and then hopping forward to money and relationships.

As a reader, it feels like the book is a puzzle that has been mixed up and re-assembled incorrectly. As someone who has written a book of his own (and who has talked to many other writers), it feels very much like somebody — read “the publisher” — came through after Hamm had finished and then arbitrarily changed the order of the chapters. In fact, knowing how methodical Hamm usually is, I'd be willing to bet money this is what happened.

A Framework for Freedom

Still, while The Simple Dollar as a whole is confusing at times, the chapters themselves are not. Hamm has a talent for cutting to core concepts and discarding the junk. He does that here, too. Where Hamm especially shines — and you know this if you read his blog — is when discussing frugality.

Here, for example, he writes about frugality as a framework for freedom:

Many people associate frugality with sacrifice: You have to give things up. They hear stories about having to give up lattes or giving up eating out or giving up nights on the town, and it sounds incredibly tedious.

A more appropriate view is that frugality is an exchange: You're trading things you don't value for things you do value.

Yes! A thousand times yes! It took me years to get this concept, but now that I have it, it guides every financial decision I make. I've written 1000-word articles trying to get this point across, but Hamm does it here in just a few sentences.

Hamm says that all of frugality can be boiled down to five simple rules:

Each chapter of The Simple Dollar contains great advice like this, and Hamm concludes each chapter with five steps to help you change your life for the better.

There's a lot of information in The Simple Dollar, and Hamm encourages readers to check out other books and websites to learn more. Along the way, he shares bits of his personal story, as well as anecdotes from folks who read his blog. These real-life stories give depth to the concepts he's trying to convey.

What Does It All Mean?

The information in The Simple Dollar good, and it's sure to be useful to many people. I do recommend this book, especially if you're struggling to get your feet on the ground. But, as I mentioned, the book's content is so jumbled that it's difficult to see the Big Picture.

Until the final chapter, this book lacks a thesis, a clear theme that ties the content together. Finally, on page 235, Hamm writes:

If there's a single overriding point of this entire book, it's this: Money is nothing more than a tool with which you can create the life you truly want. The challenge is knowing what you truly want…

Amen. That's a great point, and a fine thesis, but it belongs on page one, not page 235. Putting that at the front of the book and then referring to it throughout could help the reader parse the pile of ideas in The Simple Dollar. They're great ideas, but what's the point? We don't know until the very end.

There are 86 reader responses to "Book review: The Simple Dollar".