Everybody talks about the cost of lunches out. But what about breakfast? How much are those bagels or egg-and-cheese burritos costing you each week?

The first meal of the day can be challenging. Some people aren't hungry when they get up and thus need to take food with them for later. Or they spend the early-morning hours trying to get kids up, dressed, fed, lunchboxed and off to the bus stop or the child-care center. Or they sleep until the last possible second and fly out the door, and then hit the coffee cart in the lobby.

But have you checked the labels on those sweet rolls? (Hint: The only thing higher than the fat and calorie contents is the price of the pastry!)

It is possible to create breakfasts that are fast and easy yet not nutritionally bankrupt. After all, even McDonald's is offering oatmeal these days. More to the point: A homegrown (or at least home-assembled) breakfast is almost always going to be cheaper than one you pay someone else to fix for you.

Oatmeal can be tasty. Photo by Nate Steiner.

The Many Faces of Oatmeal

To some people, breakfast = cereal. Full stop. For me, cereal = oatmeal, because it's easy, inexpensive and tasty. And it's here: For the past few years I've used coupon/rebate combos to get old-fashioned oats for as little as 2 to 4 cents per bowl; sometimes they were even free. Currently I've stockpiled nine 42-ounce boxes of horse's food, enough for the next nine months. (By which point it will have gone on sale again.)

Oats, water, a pinch of salt, five minutes in the microwave at 50% power and I'm eating breakfast. Sometimes I add blackberries that I pick for free each summer and freeze. You could stir in nuts, cranberries, raisins, wheat germ, flax seed or whatever floats your healthful boat.

Tip: Check the bulk-buy bins at grocery stores. At one supermarket near me, old-fashioned oats can be had for $1.09 per pound. Over in the cereal aisle a box of oats costs about three times as much. That's a steep price to pay for a picture of a guy who looks like Robert Bork in a Quaker hat.

You can make “overnight oatmeal” by preheating a wide-mouthed thermos with boiling water and then adding a serving's worth of oatmeal, salt and more boiling water. Close it up and go to bed. The next morning, breakfast is served.

A woman I know makes a week's worth of porridge at a time, parcels it into single-serving containers and heats one up each morning. This oats-for-one deal could also be taken along to work if you have a microwave oven there. Either add sweetener/fruits and milk at home, or keep them in the workplace fridge.

Some folks keep cold cereal and milk at work. This works only if your boss doesn't mind snap-crackle-pop noises in the workplace — and if you don't have the kind of cubicle mates who'd pilfer your stash or take the prize out of your box of cornflakes. (Bastards!)

Whatever you do: Resist those single-serve cold cereals. They're outrageously priced. You can achieve the same effect by putting a cup of Cheerios in a lidded Tupperware container (or into a Tupperware alternative).

Whether you're buying hot cereal or cold, watch for those loss leader/coupon combos. These can make even instant oatmeal cheap enough to buy. Personally, I find the texture too runny. I like my oats to put up a fight.

I did not just give you permission for a 7 a.m. tipple. I'm referring to breakfast shakes or smoothies, i.e., mixtures of milk and/or juice and/or fruit and/or yogurt. Add wheat germ, protein powder, peanut butter or whatever else will hold you until noon.

Pressed for time? Right before bedtime put some yogurt, fruit (fresh or frozen) and whatever else you want into the blender canister, then pop it into the fridge. Next morning, add your liquid of choice (which could include soy or nut milk) and blend. Like your smoothies cold and thick? Fill an ice-cube tray with juice and store the healthful result in a plastic bag or container, to be added one or two at a time later.

Note: This is a breakfast you can sip while waiting for the bus or the train. But please, please don't drink and drive. Keep your eyes on the road and your hands on the wheel.

“Instant breakfast” powders abound. They're easy. But making your own breakfast drinks is probably cheaper, especially if you buy fruit and juice at warehouse clubs, or make your own yogurt. (Or grow your own fruit.)

And speaking of fruit: Bananas should always be available at your house. They're the ultimate grab-and-go solution if you oversleep, and they add flavor and nutrition to cereal or smoothies. 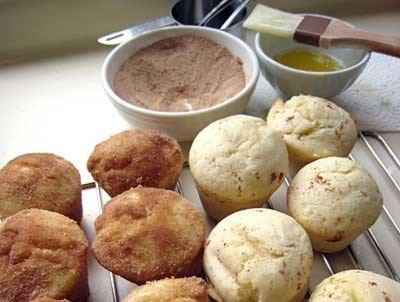 Likewise: I did not just give you permission to eat Oreos as soon as you get up. I am also aware there is a cereal with the word “cookie” in the title, but I refrain from comment.

No, I am referring to what's basically a palmful of nutrition disguised as a dessert. Myscha Theriault at Wise Bread published a recipe that features bananas, applesauce, oats, skim milk and dried fruit — but no flour and no eggs, for those avoiding such things for reasons dietary or humane. A Year of Slow Cooking offers a “baked oatmeal” recipe that you actually cut into squares, like brownies.

Healthy muffin recipes are out there, too. My sister makes a lovely apple/walnut variety with practically no sugar and just a hint of cheddar cheese. Make a double batch and you're set for weeks. Do this to avoid the commercially available muffins, most of which are both expensive and unhealthy.

But dang, they look good. Cinnamon rolls, doughnuts and bear claws are likewise a huge temptation but a bad idea. Most are crammed with fat and sugar, which means they'll make you feel like a happy and productive citizen — until your blood sugar crashes, leaving you twitching and cranky and filled with self-loathing. Also, you'll have Krispy-Kreme breath. Is that the kind of impression you want to leave with your 10 a.m. client?

(For the record: Chocolate-chip muffins are against God.)

Whole-grain toast or an English muffin with peanut butter or some other nut butter would stay with you longer. (But since PB breath is as bad as doughnut breath, make sure you brush your teeth before you leave the house.) A bagel with cream cheese or nut butter works for plenty of people, too.

Or how about making your own breakfast burritos? Recipes abound online. By fixing them at home you not only conserve money but also calories and fat content. Make enough burritos for a week (or a month) and freeze them. The same could be done with breakfast biscuits; put on eggs, meats (or “facon,” i.e., breakfast-meat substitutes), cheese or whatever you like.

Note: I pay $1.39 for a 20-ounce bag of tortillas at my local bakery outlet, which also sells numerous kinds of breads, rolls, English muffins and other carb-y delights. Or bake your own bread.

And Other Fancy Stuff

If you're a practical, organized sort of person, please come over and clean my apartment. After that, try one or more of the following techniques:

Taste is the most important issue here, because “breakfast” can mean whatever you think it means. It could mean having half a dozen hard-boiled eggs and some string cheese ready to pack into your briefcase. It could be a peanut butter and jelly sandwich, or leftover pizza. I distinctly remember eating cold spaghetti on some long-ago mornings.

Now I eat oatmeal — but because I want to, not because I have to. You're a grownup, too, so you get to make your own decisions. May they mostly improve your health and spare your wallet.

Skip the chocolate-chip muffins, though. Seriously.

J.D.'s note: When Kris read this article, she suggested I point folks to one of her favorite blogs, Food in Jars, which recently wrote about breakfast baked eggs in half-pint jars.

There are 147 reader responses to "Breakfast on the fly — and on the cheap".