Burgers or Blogging? Further Thoughts on Pursuing Your Passion

Over the past couple of weeks, we've been exploring the nature of work at Get Rich Slowly. What does it mean to pursue your passion? Is passion what work should be about? Or is a job just a source of income?

For me, there's no right answer.

Right now, yes, I'm pursuing my passion, and I love it. As a full-time writer working from home, I'm doing work I've always wanted to do, and I do it on my own schedule. Yet I recognize this isn't what everyone wants. Kris, for instance, loves her job and her co-workers. She finds the work fulfilling, and she likes the security of having an employer take care of things like taxes, paychecks, and health insurance.

What bothers me about this ongoing conversation about work is that so many people want to frame the discussion in black and white terms, as if there are absolute right answers. There aren't.

Burgers or Blogging?
One of my favorite jobs ever was flipping hamburgers at McDonald's. I'm not joking. It was awesome.

What made a dead-end job like fry cook so amazing? Looking back, I think there were a number of factors:

Though we were just a crew churning out fast food along the side of the freeway, all of us loved working together, and we took pride in what we did. We wanted to be the best crew in the store, if not the state. It was fun.

In contrast, I once worked at a Burger King just a few blocks from this McDonald's and the experience couldn't have been more different. At the Burger King, nobody cared about quality. Nobody cared about anything. The manager didn't want to be there. The employees would rather complain about life than get the work done. (And yes, I was part of the problem in that case.) It was a crummy job at a crummy restaurant.

From the outside, the jobs and the places were nearly identical. From the inside, it was like the difference between heaven and hell. (Okay, that's hyperbole, but still…you know what I mean.) Even a dead-end job can be fun, meaningful, and fulfilling under the right circumstances (and with a good attitude).

On the other hand, I've never been more fulfilled than I have been since quitting my day job to blog full time. I took a huge risk by leaving the box company to pursue my passion, but I'm glad I did. So many amazing opportunities have come as a result of the decision.

I get a lot of complaints when I write about people who pursue their passions. “Not everyone can do that!” people say. “It's not that easy!” people warn. And so on. But I'm not saying this is for everyone. I'm no Tim Ferriss out there trying to pretend that everyone can quit the nine-to-five to work just four hours a week. If I've conveyed that's what I think, it's been wholly unintentional. (And besides, most bloggers I know work at least as much as everyone else, and many work much, much more.)

It can be dangerous to turn a hobby or a passion into a full-time job. When that happens, it can turn from something you want to do into something you have to do. This can be a big problem. Again, I can use myself as an example.

When I was a boy, I loved programming computers. I dabbled in this hobby through high school and college and then, in 1998, I took some formal computer programming classes. In the summer of 1999, I picked up a couple of computer programming jobs. I was working 40 hours a week pursuing my passion. I HATED IT! Turns out that what I found fun as a hobby made me miserable when I had to do the work for somebody else. I spent a few months slogging through code before slinking back to the box factory. (And if I was willing to return to my position as box salesman, I must surely have been unhappy.)

Making It Up As We Go Along
Yesterday, Knot Theory shared the story of how he quit his dream job to find more mundane work.

Recently, Jacob from Early Retirement Extreme did something very extreme. He un-retired — gave up life as a professional blogger — and went back to work.

And then there's me. Yes, I'm still writing full time. But more and more, I'm doing other work (even though it's not for pay). I spend ten hours a week actively working on Spanish, and many more hours passively learning the language. (Active work is reading and speaking and studying; passive work is listening to music and podcasts as I do other things.)

I've been volunteering for four to five hours per week in a second-grade classroom, rekindling my latent love of teaching. (In college, I had planned to be a first-grade teacher, but lost track somewhere along the way.) On Saturday, I took a training course so that I could tutor native Spanish speakers in English. If all goes according to plan, I'll be tutoring a student in English within just a few days.

These are small things, I know, and they're not real work in the sense that I'm being paid or producing anything for anyone. (Yet.) But they're a start. They're a move from me being only a blogger to becoming something more. I feel as if something is pushing me (or leading me) toward a new career, one that combines Spanish and teaching and writing and personal finance. I'm not fighting it. Right now, I'm relaxing and enjoying the ride.

My point is this: There's no one right way to approach a career path. We're all just making this up as we go along. Because of that, you shouldn't get frustrated when career advice doesn't seem to apply to you. If something doesn't fit, set it aside and move on.

Is That Job Right for You?
In November, GRS reader (and now friend) Sarah Peck posted her one-page career “cheat sheet”. “Given statistics that say that as much as 80% of people don't like their job,” wrote Peck, “and some 25% of us are un- or under-employed, I scratched out a quick flow chart for questions to ask yourself about your current job — or a job you are considering.” 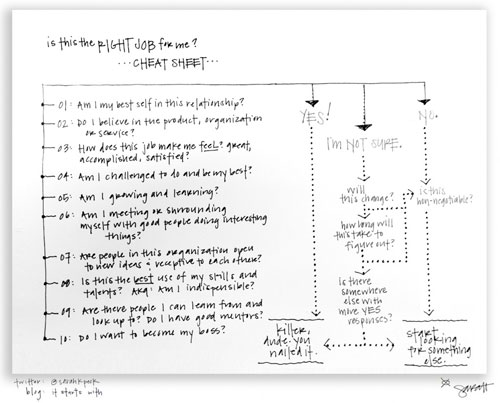 Are you in the right job?

Ultimately, the key to being happy with work is to figure out how it fits into your life. Do you want to do what you love? Or would you rather you simply worked to pay the bills? Neither one is right; neither one is wrong.

Whatever the case, when you work, do your best. This is the real key to job fulfillment — not to pursue your passion, but to be passionate about what you pursue. This is a subtle but important difference. When you choose to do your best, not only is your employer rewarded, not only is the customer rewarded, but you are rewarded as well.

8 tips for saving money on hobbies and pastimes

Book Review: Banker to the Poor

The psychology of consumerism