In yesterday's discussion of how unit pricing can save you money, John made a passing comment that merits closer attention. He wrote:

I use unit price all the time when shopping and it's super convenient that the stores do it for you. I did an analysis of spices that come prepackaged versus a bulk food store here and the difference is ridiculous!

John wanted to stock up on basic spices, but didn't want to spend a fortune. He priced three different brands at a local grocery store to find out how much it would cost if he purchased 100g of each item on his list. He found that:

After pricing spices in the grocery store, he priced them at Bulk Barn, a Canadian bulk-food warehouse. 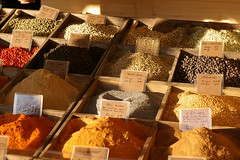 He found that the spices were much, much cheaper when purchased in bulk. They cost him only $7.58, less than than 10% of buying the national brand. (Note that here “in bulk” means John bought them loose, scooping his portions into bags.)

Looking at a larger list of spices, John would have spent an astounding $175.17 to buy the big-name brand. The same ingredients cost only $11.36 at Bulk Barn.

Some people are quick to dismiss the value of frugality. “Pinching pennies doesn't pay,” they say. I disagree. Obviously it's important to boost your income, but thrift takes little time and can yield huge dividends. Frugality is about changing habits and perspective. Besides, it's easier for most people to learn the value of unit pricing than it is for them to start their own business.

John's story makes me curious. When we were in college, Kris and I shopped at a bulk food store. We'd go home with bags and bags of spices, cereal, dried fruit, and other food for cheap. Looking back, I haven't been inside such a place since we were married fifteen years ago. Do they still exist in Portland? Apparently so, but just barely. (Costco is not the same thing. You can't buy a small amount of anything at Costco. Also, Portland does have Limbo, a produce/spice stand next to the Trader Joe's on 39th. Limbo has an entire aisle of bulk spices.)

[A Financial Flogging: Spice up your wallet, image by Adam Baker]

There are 67 reader responses to "Buying cheap spices: Unit pricing in action".