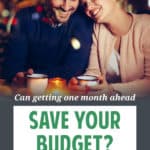 There are usually ways to save money each month — believe it or not.

For instance, once upon a time, my husband and I were pretty clueless when it came to how we spent the money we earned at our 9 to 5 jobs. We made a decent income but struggled to keep track of where it was all going and, more importantly, why it always managed to disappear into thin air. I won't bore you with the details again, but we ultimately discovered that we were spending ridiculous sums of cash on groceries and eating out, home repairs, and miscellaneous frivolous purchases. But how did we find that out? Now, that is the interesting part.

Once we decided that we needed to make a change, we poured through bank statements from previous months and began tracking our current spending. This led to a plethora or discoveries — including the realization that we were eating out more than we were eating at home and were much deeper in debt than we knew. Still, we kept digging through data and strategizing a plan for debt repayment and escape. However, as we put all of our efforts into figuring out how to create some sort of budget, I realized something. Our incomes were fluctuating — a lot. With that juicy detail in mind, we talked endlessly about what we were going to do about it. After all, how could we budget without knowing how much money we would make in any given month? And how could we create a plan of action when the most crucial piece of data (our income) was missing? My light-bulb moment came when it dawned on me that, instead of budgeting on this month's income, we could build a budget based on what we earned last month instead.

Related >> How to Track Your Spending (and why you should)

How to Get One Month Ahead — And Why You Should

I didn't know it at the time, but getting a month ahead is actually a popular budgeting strategy and one of the main principles of zero-sum budgeting. Popular budgeting software programs such as You Need a Budget are even built around the idea of getting a month ahead. From their website: “Spend this month, what you earned last month. How? Save enough money to go an entire month without touching your regular income. Then the next month, spend last month's income while earning this month's income. You'll spend this month's income next month.” When we first decided to get one month ahead on our bills, we were unaware that these types of resources existed but still able to conceptualize it somewhat on our own. And, thanks to the fact that we earned a decent income, it didn't take long to figure out how we were going to save enough money to get a month ahead — we just needed to put together one month's worth of expenses. Here's how we did it (and how you can do it too):

A lot of people would look at this budgeting strategy and think it's far too much work, but it was truly the only thing that made sense in this sometimes backwards-thinking head of mine. To be honest, I just couldn't think of any other way to budget “in the moment” without knowing how much I would earn from week to week. Because, like I said, our incomes were fluctuating a lot at the time. I was working as an hourly employee back then; and the time I put in varied wildly due to seasonal activity, overtime, and other things beyond my control. My husband was paid his salary as a mortician, but was often rewarded with fairly large commissions for selling headstones. Those factors combined meant that our income could be as much as $1,500 higher or lower from one month to the next, with no real method to predict the swings.

Related >> How I Budget With a Variable Income

The Benefits of Getting One Month Ahead

When it comes to our finances, getting one month ahead was one of the best things we ever did for ourselves. First, it made it abundantly clear that we were wasting not only our resources, but also an excellent opportunity to get ahead. But more importantly, the fact that our spending decisions were finally based in reality and actual dollar figures is what helped us make solid progress for the first time instead of continuing on in some idealistic belief that everything would turn out fine somehow. I'm glad I learned how to get one month ahead on my own, but I'm also happy to discover that there are many resources out there for people who want to take charge of their finances. But, as with anything else, you have to decide it's something you need to do and then create a plan of action to make it happen. If you do, I hope you discover the same thing I did — that you already have more money than you realize. Are you one month ahead on your bills? Have you ever considered using this strategy?

There are 44 reader responses to "Can getting one month ahead save your budget?".