“How much does it really cost to eat a healthy diet?” asks Tara Parker-Pope in a recent New York Times article. Among other findings, she notes:

Parker-Pope's story profiles Christopher Greenslate and Kerri Leonard, a California couple who each lived on a dollar a day for food during the month of September.

[They] bought raw beans, rice, cornmeal and oatmeal in bulk, and made their own bread and tortillas. Fresh fruits and vegetables weren't an option. Ms. Leonard's mother was so worried about scurvy, a result of vitamin C deficiency, that they made room in their budget for Tang orange drink mix. (They don't eat meat — not that they could have afforded it.)

A few times they found a bag of carrots or lettuce that was within their budget, but produce was usually too expensive. They foraged for lemons on the trees in their neighborhood to squeeze juice into their water.

Some people find these sorts of experiments pointless, but I think they're interesting and educational. They not only let participants experience how others might live, but they also demonstrate that it is possible to live cheaply in the United States. (Sometimes we forget just how much food we consume, how much we waste, and how much we pay for convenience.)

To read more about Greenslate and Leonard's “dollar a day” experiment, check out their blog, The One-Dollar Diet Project. They chronicled their food choices for the entire month, starting with the first day. The blog gets more interesting as it goes on, though. On day eleven, for example, the experiment stopped being fun. And on the day after their project ended, they each spent $20 on food.

With supermarket inflation a growing concern recently, processed foods will probably play an even larger role in American diets. Finding inexpensive nutritious food is a very real issue for many people. Here at Get Rich Slowly, we've discussed ways to eat healthy while keeping it cheap several times in the past. I've also shared others' experiments in eating well for less. The USDA Center for Nutrition Policy and Promotion publishes a 76-page booklet entitled Recipes and Tips for Healthy, Thrifty Meals (PDF). 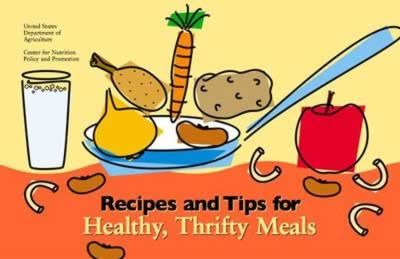 Many of the tips in this publication will be familiar to frugal cooks:

The booklet also includes a list of best buys for cost and nutrition, tips for healthy cooking, and fifty pages of recipes. Recipes and Tips for Healthy, Thrifty Meals is also available in HTML format.

There are 94 reader responses to "Could you eat healthfully on one dollar a day?".