Written by April Dykman
|
|
No comments

When I was a freshman in college, I did two very bad things (ahem — two bad things related to personal finance).

First, I opened a VISA credit card. There was a guy at a booth on campus, and being too naive and timid to tell him to buzz off, I stopped and listened to his pitch. Next thing I knew I was filling out an application. 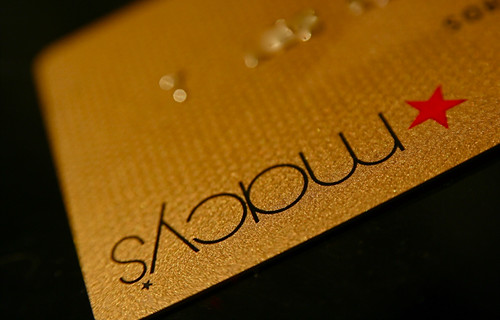 At 18 years old, with no job, steady income, or credit history, I now had a $1,000 credit line. I maxed it out in less than three months and was shocked when the bill arrived.

Luckily, I was about to start a part-time job, so I was comforted in knowing I could handle this predicament myself. I paid down the balance — but then charged it up again. This cycle went on for years. I always paid more than the minimum, but never fully paid off the debt.

The second very bad thing I did was open a store credit card with a major retailer. I was about to pay for my purchase (with the aforementioned VISA, of course), and the salesperson told me I could save money and receive special offers and free items just for signing up for a card. I demurred, but she was persistent. “You can pay it off as soon as you get home and still get the coupons and discounts,” she said. “That's what I do.”

Unfortunately, it didn't work out that way for me. I forgot I'd opened the card, somehow missed the first bill, and then was late with my payment. I was almost three months delinquent before I paid off the card, and I got a mark on my credit report, all for a small balance I could have easily covered with money in my bank account.

The Cost of Store Credit Cards

Cashiers are often required to ask customers to sign up for store credit, and some stores require them to meet a quota for new card sign-ups. But these days, I politely tell the cashier, “I don't carry store credit cards.” If they persist, I repeat myself. “Don't you want to save 10%?” No thank you, I'd rather not.

A recent study from New York Representative Anthony Weiner's office provides even more reason to avoid store branded cards. The study found that 35 major New York City stores had an average interest rate of 23.83% on store cards (the national average APR for a regular credit card is 14.78%). Which stores offered the worst rates?

In addition, the report found that store cards use a series of “teaser” deals to entice shoppers to take the bait, such as offering 0% interest, but neglecting to mention you have pay off the balance within a certain time period or else the interest rate is applied retroactively on the initial purchase price.

How I Got Suckered into Opening a Store Credit Card

Well, despite knowing all this, here's the story of how I got suckered into opening a store credit card and what I learned from it.

It was the best of experiences, it was the worst of experiences…
Last week, I ventured into Neiman Marcus for the first time. It was the only in-person store that carried the Stuff I wanted, so I drove out of my way to go there. The salesperson who helped me was probably one of the best I've ever encountered. She knew I wasn't spending much — about $60 — but she spent a considerable about of time helping me. She was friendly, extremely knowledgeable, and showed me other products she thought I'd like without pushing me to buy more. Instead, she offered to send me home with samples of her additional recommendations. As she put everything into a bag, the second salesperson helped to start the check-out process, which went something like this:

Salesperson #2: Do you want to put this on your Neiman's charge card?

Me: No, I don't carry store credit cards. (I hand her my MasterCard.)

Salesperson #2: We don't take MasterCard, but it takes just a few minutes to open a store account.

Me: No thanks, I don't open store cards. Can I put it on a Visa debit card?

Salesperson #2: We don't take Visa, either.

Me: If you don't take Visa or MasterCard, what do you take?

I didn't have enough cash on me, I don't carry checks, and I don't have an American Express card. The first salesperson seemed too uncomfortable to push me into opening an account, so salesperson #2 continued with the pitch, telling me most of what I knew already — that I won't have to pay interest if I pay my balance each month and that the card comes with all kinds of “fabulous” rewards. She also told me that Neiman's will never sell my personal information (this, of course, turns out to be false).

The Lowdown on Neiman's

I found out later that Neiman's does take Visa and MasterCard, but only for online purchases. It's even willing to temporarily relax its rules during Super Bowl XLV “to make it easier for customers visiting from out of town…or from cities that don't have a Neiman Marcus store.” Gee, how thoughtful!

According to Slate, the private-label credit card corner was one one of the most desired parts of the business when it sold during a 2005 auction (HSBC purchased the credit card portfolio in mid-2005 for $640 million.) At the time, there were 562,000 active users paying 15% APR — generating about $550 million in receivables for the company.

I knew store credit was big business, but I'd never encountered a store that doesn't accept major credit cards to push customers into opening a store credit line.

Back to my in-store experience: I was feeling cornered and conned. My first thought was to walk away. Now that I knew exactly what I needed, I could purchase the item from another retailer online.

But here's the thing: I wouldn't know what to buy if it hadn't been for salesperson #1, the person who spent a lot of time helping me even though she knew I wasn't spending much money. She more than earned her commission, and I felt bad about walking out. There weren't any ATMs nearby, and I had an appointment in about 15 minutes. I was feeling pressured. On the other hand, I was mad and felt as though I'd walked into a trap.

I caved, and I opened the account to make the purchase. But I'm calling Neiman Marcus to pay the balance and cancel the card.

I know Neiman's won't miss my business — I'm hardly their target customer. For example, one of the benefits of “Circle Two” membership (for the busiest of Neiman's charge card users) is fur storage, which made me giggle. I'm the kind of gal who worries that someone might mistake her faux fur coat for the real thing. The cover of the InCircle member brochure asks, “Are you a member of the in crowd?” Uh, no. Not usually.

In retrospect (and sarcasm aside), there were better ways to handle the situation that would have given the salesperson credit for the sale and would have avoided me opening a store card I absolutely do not want.

When I told my husband what had happened, he had the perfect solution: “You could've asked the salesperson for her name and told her you'd come back to pay in cash.”

Yes, that is exactly what I should have done. But when I was in the situation, I wasn't thinking clearly. I felt pressured, irritated, and that I had to make a choice right then and there, when I really didn't.

(Also, I was reminded that I should carry at least one paper check with me. I used to do this, but fell out of the habit because it was so rare that I ever needed one. Now I've tucked one into my wallet again to have one more payment option.)

I never, ever thought I'd open a store card. I'm disappointed that I let it happen, but at least I can amend the situation. I certainly now understand, from firsthand experience, how tricky retailers can be when it comes to pressuring consumers into opening store credit cards.

Are All Store Credit Cards Bad?

The mark on my credit report is long gone, but it was a sobering lesson about the dangers of credit, especially for someone with little personal finance education (or income). When I graduated from high school, I could easily find the limit of a function as x approaches a constant, yet I didn't know about compound interest. My personal finance education began years later when I started lurking here at GRS.

I haven't carried a credit card balance in years, and I consider myself a reformed and responsible consumer. I'm also not completely opposed to store credit. If I were remodeling a house, for example, maybe I'd consider a Home Depot card for the initial discount. Then I'd cut up the card and pay the balance immediately (as in the minute I got home) with cash I'd saved in a “home remodel” savings account.

I realize most GRS readers are savvy with their credit, but as stores ramp up their high-pressure holiday pitches, it's important to be on guard. By and large, these cards aren't worth the hassle or the risk. Credit is serious business, not something to sign up for on the spur of the moment without reading the fine print.

Strategies for an affordable college education

Should you be a generalist or a specialist?