Here is a guest-post from RH Bee of Finance for Fun. In the forums, RH asked: “How come I rarely come across posts that have to do with the ecology in the personal finance blogs I read? I mean they talk about growing their own food, and spending less on doodads, but none of them mention that this is a way to save the planet.” My response was: “Write something and I'll post it!” So he did.

Bill McKibben's new book, Deep Economy: The Wealth of Communities and the Durable Future, strikes at the heart of personal finance concerns. 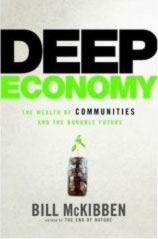 McKibben covers the world from Vermont to China and back again as he develops his answer to the age-old question, “Paper or plastic?” And though he doesn't mention that the honey bees are dying, he would no doubt notice the parallel between these small nectar-farming bees and their human counterparts, who, as a result of the so-called Green Revolution, are disappearing.

In an early section of the book, he discusses After Growth and asks, “What next?” Where do we go after we've reached a place where we have every thing we need and more? Is More Better? McKibben asks this question of individuals, but in a larger sense, he's directing it towards society, and to those whose power position would enable them to act on the information. He notes that ecological economists are discovering that the there is truth to the saying, “Less is More”.

The next section of the book, The Year of Eating Locally, documents the experience of living frugally while learning the personal financial benefits. By living locally, McKibben gets to know his community markets and the local farm industry. By setting a goal of eating locally for a year, he and his family begin to appreciate the value of home-cooked meals, reading with each other, and budgeting their car use so that they stack tasks that can be done on the same trip. In a sense, he travels back to a time when things were simpler.

This, quite naturally, leads him to look at how we and why things have changed in the next section, entitled All for One, or One for All. He writes:

For most of human history, the two birds More and Better roosted on the same branch… The idea that individuals, pursuing their own individual interests in a market society make one another richer and the idea that increasing efficiency, usually by increasing scale, is the key to increasing wealth has indisputably produced More. But Better does not necessarily follow anymore.

We can't deny that, as Americans, we lead the world in over-consumption, and it's getting worse. We are hyper-individualists as we try to emulate Trump through what seems endless seminar after seminar. But I must stress, as McKibben does, that there are two sides to the economic coin. Nation after nation has profited immensely by turning to the green — as in mono-crop agriculture and government subsidized growth. As more and more people are released from the drudgery of the land and released to develop, we can't fault them for doing this just because we, the richer nations, are already there.

But it is because of this truth that McKibben talks about The Wealth of Communities in the book's next section. What can we bring to each other? And how can we trust that we're doing it for the right reasons?

We need to once again depend on those around us for something real. If we do, then the bonds that make for human satisfaction, as opposed to endless growth, will begin to emerge.

Much as the personal finance community of bloggers has. A community where we reassure ourselves that planning, and sharing, and saving, and making do with what you have already, is of continuing value to us all. As an example of this, McKibben uses the current state of radio, where large corporate entities like Clear Channel have taken over. Ask yourself: In your lifetime has More big corporate-owned broadcasting made your radio listening Better?

As I walk down the hill to my local grocery this afternoon, I am reading the final section of the book, which McKibben calls The Durable Future. He starts by describing his visit to the Chinese city of Yiwu with its incredible warehouse store called International Trade City. Imagine five IKEAs side by side by side by side by side and you'll still fall short.

Yes, the Chinese economy, in a wonderful mirror model of the U.S., is expanding by leaps and bounds. The per capita income is already at $1700 a year, and is expected to double every seven years, ad infinitum, as is the rate of production. Extrapolate that to the number of vehicles on their roads. Think about the carbon footprint that will leave. Pogo once said, “We have met the enemy and he is us.” 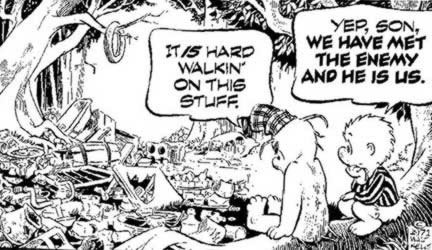 In the grocery store, I find the vitamin water I came for. I also select a bunch of carrots grown by an organic farmer just outside of town. As I'm approaching the counter, I see the display of 10-for-$10 durable grocery bags that I can buy to carry my groceries home. I'm happy because here, in a nutshell, is one of McKibben's economic ideas: Think global, buy local.

But when I get home I look at the label in the bag. It's from a company called Earthwise Reusable Bags. It's durable alright, made from 100% non-woven polypropylene. And manufactured in China.

I haven't read McKibben's first book, The End of Nature, but it's clear that whatever thoughts he brought to the state of our world then have only intensified.  But as he points out, countries that adopt the U.S. model of endless expansion and increased efficiency are not at fault for doing so.  It's just that we — and I'm thinking of personal finance bloggers when I say this — haven't yet shown them what to do next with all their abundance.  We have a chance to model, through our own efforts at controlling and understanding our personal finances, to be a part of the change that may still save the world.

This book sounds fascinating. While I'm concerned that perhaps it treads dangerously close to some fallacies (“Old days were simpler and therefor easier”), I can appreciate the thoughtful approach to the subject. I'm happy to share your ideas about personal finance, too, whether they involve ecology, spirituality, child-rearing, or philosophy. If you have an idea for a guest-entry, please let me know!

There are 9 reader responses to "Deep Economy: The Wealth of Communities and the Durable Future".