Defining retirement: What does it mean to be retired? 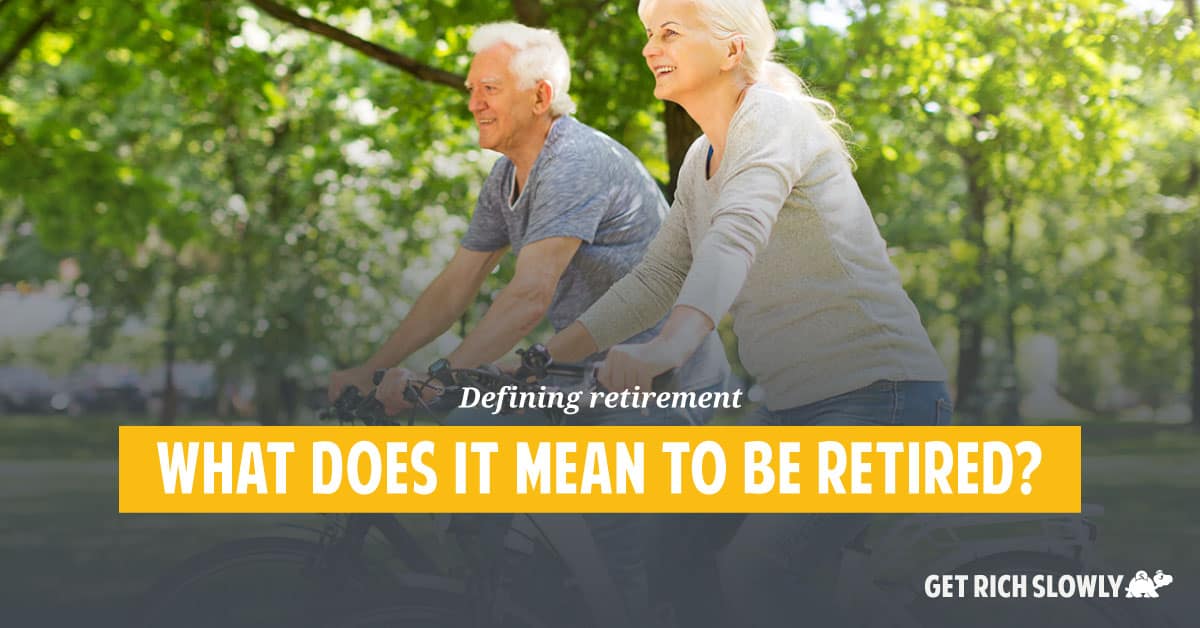 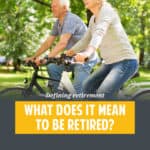 Welcome to “retirement month” at Get Rich Slowly. During the month of March, we'll explore all sorts of topics related to retirement and financial independence. To start, let's look at the defintion of retirement.

What does it mean to be retired?

This question probably seems silly to some of you. After all, isn't there a dictionary definition of retirement? There is: “The action or fact of leaving one's job and ceasing to work.” As is sometimes the case, however, the dictionary definition is less than satisfactory when you take a closer look.

In my ongoing quest to learn everything I can about the history of retirement, I recently picked up The Experience of Retirement by sociologist Robert S. Weiss. This book covers the real-life experiences of 100 traditional retirees from the Boston area. What's it like to leave work? What are the financial implications of retirement? The social implications? What makes a good retirement?

Weiss, who has spent a long time thinking about retirement, has trouble with the dictionary definition of the word. He writes:

“Defining retirement can be surprisingly difficult. There are, in general, three approaches. I call them the economic, the psychological, and the sociological.”

For now, though, let's take a closer look at Weiss' three definitions of retirement.

“The economic approach [to retirement] assumes that a person older than his or her mid-fifties is retired if he or she does not work, or at least does not work for money,” Weiss writes.

The problem with this definition, however, is that it completely ignores the concept of early retirement. With the possible exception of retired athletes, younger folks who have left the workplace are not considered retired.

Weiss notes that the economic approach to defining retirement also fails when looking at people who have retired from their careers but maintain “substantial part-time employment”, perhaps as a contractor with their former firm. It also ignores older people who might want paid work but are unable to get it.

The economic definition of retirement is an objective definition — it's a way for economists and social scientists to decide whether you are retired. Contrast that with the psychological approach to defining retirement, which is subjective. It's an internal judgment each person makes for herself.

“According to this approach,” Weiss writes, “you are retired if you think you are.” This, he says, is the approach to retirement used by most surveys; people self-select whether or not they're retired.

When asked, I often say that I am retired. (Or, at the very least, semi-retired.) Yes, it's true that I'm currently spending 40+ hours per week running this website. It's also true that I hope to make money from it. Despite this, I consider myself retired. That's because I've (unknowingly) been using the psychological approach to defining retirement.

Weiss notes, “The only problem of classification that the psychological approach is likely to encounter occurs when people themselves are not sure whether they are retired, as when they have retired from what had been their careers but now work at something new.” Plus, self-definitions are malleable. They can change quickly.

The final approach to defining retirement, Weiss says, is the sociological. “According to this approach,” he says, “you are retired if you have left your career and occupy a social niche in which it is socially acceptable to be without work.”

With the sociological definition, you are retired if others see you as retired.

There can be conflicts, however, between the way others view your status and how you view it yourself. Weiss writes:

“This is the definition of retirement that I think we use in everyday life. And yet it may be the least clear-cut of the definitions: it requires others' ratification, and there is no specific point at which this can be assuredly obtained.”

Weiss shares the example of a once-successful lawyer who had been without steady employment for years. “He said he was delighted to reach his mid-sixties…Not until then could he be sure his claim to retirement status would be accepted.”

Even with these three approaches to defining retirement, it can sometimes be tough to determine if any one person is retired or not. Yes, the definitions often overlap, but they can also come into conflict with each other.

Weiss offers himself as an example. At the time he wrote The Experience of Retirement, he was nearly eighty years old. It had been many years since he regularly taught classes or conducted research. Yet he continued to work — just on a lesser level than he once had.

“The economic definition of retirement would unhesitatingly classify me as retired,” Weiss writes. Psychologically, however, Weiss is “resistive”: “I do not want to think of myself as retired.” And sociologically, his position is ambiguous. He continues to work, but his social niche is much quieter than it once was.

If an eighty-year-old sociologist has trouble deciding whether he's retired, it's no wonder some people chafe at calling me — a 48-year-old writer — retired. Yet I consider myself retired.

Ultimately, “retirement” is a loaded word, and I try not to use it except in casual conversation. I prefer to talk about “financial independence,” which is essentially the same idea but without the baggage. (This is precisely why I use the term “global climate change” instead of “global warming.” The latter is more common, but it carries so much baggage that it tends to cloud conversations about an important subject.)

Re-framing the conversation in terms of Financial Independence has another advantage. There are clearly different degrees of financial freedom, so it's possible to talk about progress along a sort of FI continuum.

To me, there's little or no difference between retirement and Financial Independence. But I usually prefer to use the latter terminology in order to avoid fights with the Internet Retirement Police.

Life expectancy: The most important variable in retirement planning

Confessions of a Butcher: Eating Steak on a Hamburger Budget

Dealing with Disaster: A Brief Guide to Emergency Preparedness

Yes! Sign up and get your free gift
22 Comments
Oldest
Newest Most Voted
Inline Feedbacks
View all comments

As featured in:
15 shares
wpDiscuz