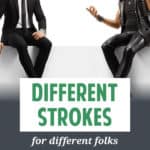 A couple of weeks ago, I stopped in to visit Prosperity Pie Shoppe, a local dessert and coffee place co-owned by Luna Jaffe. Jaffe is a sort of wonder woman who blends art, psychotherapy, and financial education into something she calls “wild money”. The space that Luna and her partners own isn't only a source of tasty treats; it's also a studio for money coaching.

Over pie and coffee, I chatted with Luna and one of her money coaches, Dryden Driggers. We shared our backgrounds with each other and talked about the direction we'd like to take our work. I think the three of us have a lot of shared viewpoints and visions. I imagine we'll find ways to work together in the future. 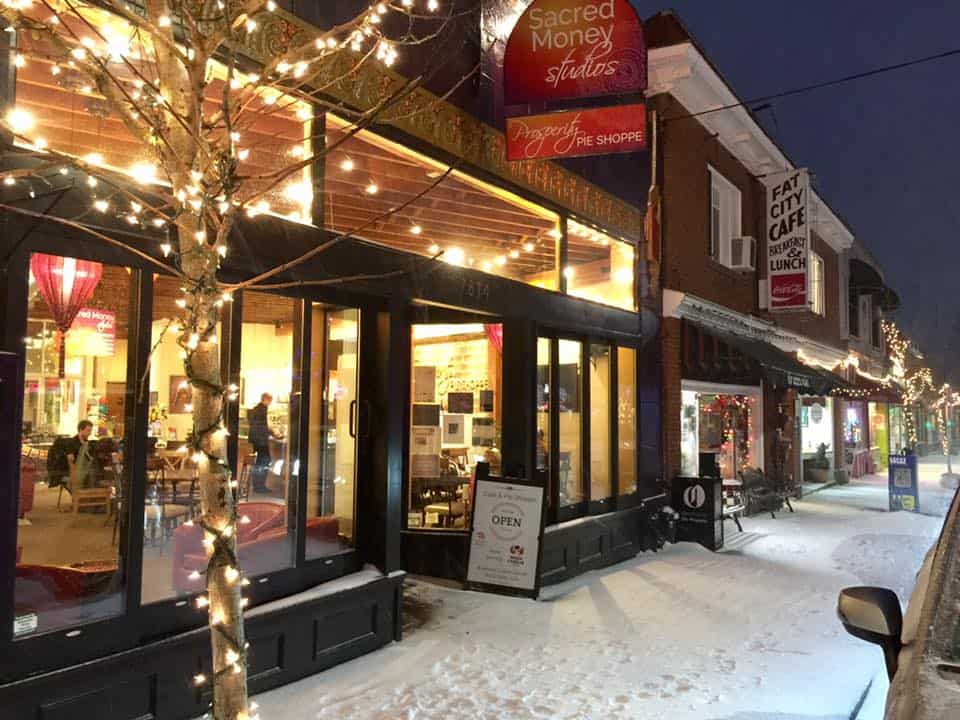 Giving Every Dollar a Job

One thing stuck with me from our talk, though. We were discussing how to actually reach people who want financial help. When people come to us ready to dig out of debt and build wealth, what specific ideas are effective “triggers” or “switches” that change how they manage money?

“In my work,” I said, “I've found that getting people to focus on saving rate — the gap between their earning and spending — can make a big difference. In the financial independence community, many people receive this spark of inspiration when they read Mr. Money Mustache's article about the shockingly simple math behind early retirement. It's all about how powerful a high saving rate can be.”

“We're not working with people who are thinking about early retirement,” Dryden said. “Some of the people we coach are well off, it's true, but many are just starting out. They're deep in debt. They're living paycheck to paycheck. They're simply grasping for a lifeline.”

“Right,” said Luna. “And for these folks, budgeting is vital. We've had great success steering folks to You Need a Budget. Even if they don't use the software, we want them to understand the YNAB philosophy because it can be so powerful.”

“Exactly,” said Dryden. “I think the one thing that really helps the people we coach is the idea that you should give every dollar a job. That's the first rule of YNAB.”

On Saturday, I met with my friends Wally and Jodie again to talk about their financial journey. Since our first meeting in August 2018, this couple has made significant progress toward paying off their debt and establishing a solid financial future. They wanted a check-in to make sure they're still on course.

It was interesting to listen to what Wally and Jodie had to say, to pick up on the financial concepts that seem to have clicked with them.

“We find that the gap can cause problems,” Jodie said. “When it's especially wide, we get giddy and end up spending too much.”

“But we're glad to have that gap there,” Wally said. “I've never had a gap in my life. It's crazy to think that we've had one for almost a year now.”

“We just need help deciding what to do with it,” Jodie said. 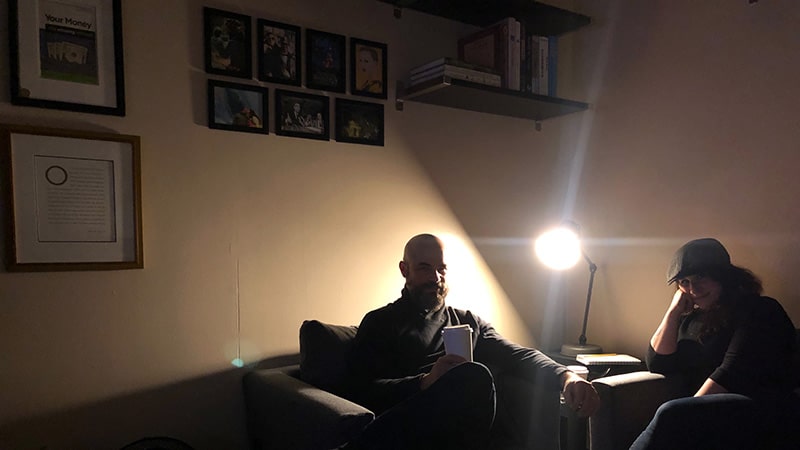 Wally and Jodie, the first guests in the brand-new GRS office space

Our talk on Saturday revolved around their options. They could use this “gap” money to accelerate debt payments. They could set it aside for other savings goals. Or they could mix it up. In the end, I think they decided to use their gap to do two things. First, increase their emergency fund from $1000 to $3000 or $5000. Second, set aside $400 per month into an opportunity fund (although we never used that term).

Do What Works for You

My conversations with Luna and Dryden and Wally and Jodie — and my recent family meeting with Kim — has reinforced my belief that each person has a unique set of skills and a unique psychological makeup. And because we're different, we'll each be drawn to different aspects of money management.

Kim, for instance hates tracking spending (or anything else). She's never going to build a budget or use a tool like Personal Capital. But Kim comes equipped with built-in frugality. Plus, she's a hard worker who is willing to pick up extra shifts in order to make more money. And if she can automate good behavior — such as funneling IRA contributions into index funds — she'll gladly do so.

I, on the other hand, love tracking my money. I want to manually enter transactions into Quicken. And while I'm not naturally frugal — I'm a natural spendthrift, actually — by tracking my money, I'm able to spot problem areas and make corrections. Plus, I'm good at creating income streams. My income streams are never large, but I have many of them.

It's as if money management is a buffet. There are a wide variety of effective tools available to help you meet your financial goals. It's your responsibility to browse this buffet, then to think about what it is you want to accomplish and consider your own tendencies and inclinations.

Using this info, pick a few techniques to try. Some will work for you. Some won't. Don't get discouraged if some piece of smart advice doesn't suit your situation. That's okay. Simply return to the buffet and pick another option!

For more than thirteen years, the unofficial motto of Get Rich Slowly has been “do what works for you”. There's no one right way to achieve financial success. There are some best practices, sure, but sometimes the “best” way to do something isn't the most effective way for you…or for me.

Wally and Jodie, the first guests in the brand-new GRS office space

Please more on this.

You’re opening a consultancy or something, now?

C’mon. We’re here for the gossip.

What’s up with the new office space, and how does it go with the transportation saga? You’re electrified yet? Will the office pay for itself somehow?

Need some suspense music till the next chapter… Seriously interested in hearing how you sorted those 2 problems.

Haha. Hilarious. So, Kim suggested that I rent office space during our family meeting on Thanksgiving Day. I was reluctant at first because hey, I have some space in her office inside the house, plus I built my writing studio. But the reality is that I’m not getting any work done here. So, one morning two weeks ago, I walked the five miles to the building with space available. I liked the 129 square foot room (at $325 per month). I rented it. Over the past two weeks, I’ve slowly been setting up my space. (More on that soon, I… Read more »

Yes, I know the office space discussion from the previous articles. Some of the people commenting on those threads criticized the office expense though. Now, I thought for a moment you might be receiving clients there. Free-association I guess. But yes, if you’re working well there, it’s money well spent. So—you’re going to continue walking the five miles? Or will you get on a coffin to the office like most sprawlers? RE: Coffin: Found this great little website the other day: https://carsrcoffins.com/words/posts/fat-bike-overniter/ I think “Cars are coffins” is my new unofficial motto, hahahaha. Yeah. Was on bike errands around town… Read more »

Interesting on your “store front” helping. I’d make sure people sign a letter stating you are not a financial planner. Maybe you should become one??? We, 62/69, have three income streams. After doing our budget, we should be able to live on two of the three. Right now we seem to piddle that money away. We know we are moving in three years. After moving 16 times, we know that will cost between $10-15,000. We are trying something really different (for us) this year. We will move the third income now to a “no touch” credit union in our new… Read more »

Great move on the office space. Let us know if it helps you. Yes, it would be great if you could walk or bike to the office.

I know walking / biking to work helps me.

All the best in your journey. Carry on!

I think getting an office space is a good idea too. I hope it works out.
Maybe you really should get into the coaching business. You’re a people person and you enjoy helping other people.
I’m with you about doing what works for you. Everyone has to find their own path. Just try different tactics and see what’s best.
Happy holidays!

My husband and I have an “opportunity fund” in our budget. We call it the Overtime Account, because he does a lot of overtime and it’s an unknown quantity until he’s paid. We usually let it build for a few months and then allocate it to debt, travel, long term savings and sometimes we’ll split some for our separate spending money. It’s been a boon for our debt reduction.

Was the motorcycle purchased since your last meeting with them? I don’t recall that being one of their debts before. A motorcycle was mentioned as a long term savings goal. It’s nice to see they’re making progress, but I’d argue that until their debt is paid off, there is no “gap,” only extra money that shoud be thrown at debt until it’s gone. And if they bought that morotcycle recently, they’re just replacing debt they’ve paid off with more debt. You mentioned giving them a list of baby steps j your last article a la Dave Ramsey. They might want… Read more »