In a comment on my interview with Adam Shepard, Liberal Arts Dude pointed to the Economic Mobility Project, a nonpartisan collaboration between several leading think-tanks. According to the project's web site:

While as individuals [these groups] may not necessarily agree on the solutions or policy prescriptions for action, each believes that economic mobility plays a central role in defining the American experience and that more attention must be paid to understanding the status and health of the American Dream.

The Economic Mobility Project's purpose is:

To provoke a more rigorous discussion about economic mobility in America by presenting new findings and research, and analyzing the effects of social, economic and human capital factors that may impact one's ability to move up the economic ladder over a generation. 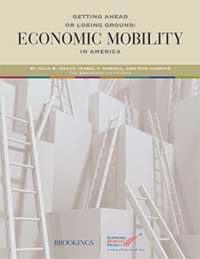 Re-stated in plain English: several groups that don't normally agree on political issues have banded together to explore economic mobility, the ability of any one person to improve her economic status within her lifetime. Can a child born into poverty achieve wealth? How? What factors influence his success or failure? The group isn't after political answers — it's seeking actual data.

Yesterday the Economic Mobility Project released a study about the trends and issues that influence economic opportunity for Americans. Getting Ahead or Losing Ground: Economic Mobility in America, is a volume of research into the viability of the American Dream. According to the press release:

Other interesting findings  include the fact that “family incomes of both sons and daughters resemble their parents' to a similar degree”. But “only 31 percent of black children born to middle-income parents make more than their parents' family income, compared to 68 percent of white children”.

The mission of Get Rich Slowly is very much about economic mobility. I was born into a poor family, as was my father, as was his father before him. I'm pursuing the American Dream. I'm hoping to help others achieve it as well.

There are 33 reader responses to "Economic Mobility and The American Dream".