Extreme personal finance: Eating well on one dollar a day

Last Thursday, Ron Lieber (who writes the “Your Money” column for The New York Times) posted an innocuous little tweet:

To translate into plain English, Jeffrey from the Grocery Coupon Guide blog undertook a little experiment last month. In response to a challenge from his sister he “ate well” on just a buck a day, thanks largely to his awesome shopping skills and couponing prowess.

Because I love stories of extreme personal finance, and because I haven't highlighted one in a long time, I decided to take a closer look; I spent an hour reading about his project. Holy cats! This fellow's shopping abilities are insane. 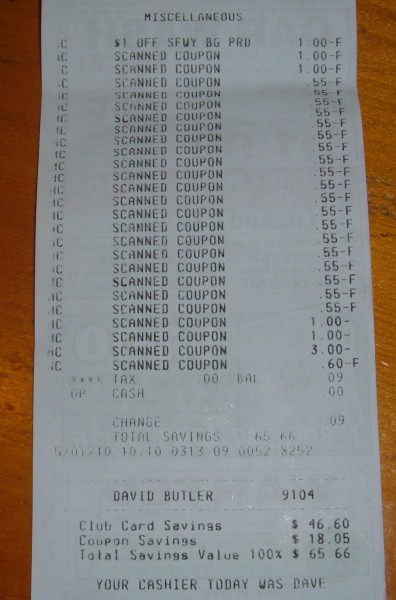 If you don't have time to read the entire series, at least check out day one, in which Jeffrey documents the things he bought to get the project started. He photographed everything he purchased and every receipt, and describes exactly how you might be able to find similar discounts. It's great stuff. (Near the end of his introductory post, he gives a sort of table of contents for the project so that you can jump to the day you want.)

On that first day, he picks up two boxes of instant oatmeal, some cream cheese and some sour cream, ten apples, four boxes of wheat thins, a jar of peanut butter, two cans of pork and beans, a bag of rice, and two packages of tortillas. And he spent just $4.49 for all of this.

Here's Jeffrey's list of the ten things he learned while eating on $1 a day for a month:

On the final day of his project, Jeffrey summarized his purchases. During the month of May, he spent $27.08 to purchase $597.96 worth of food. And because of the goofy rules he agreed to with his sister, he ended up donating a bunch of stuff to his local food bank. (The last post is entertaining because of the mistake he makes and then corrects; it had me laughing out loud.)

I like that Jeffrey has a realistic attitude about this project. While he thinks that anyone can do the same thing he's doing, he also recognizes that living on a tight food budget puts you in a precarious position: “The problem with eating on a limited budget, when the unexpected happens…is that you can't just stop into a fast food joint and grab a bite.”

Jeffrey was so pleased with the challenge that he decided to continue it. For the past week, he's been chronicling his continued efforts to eat well for less. (Though he's loosened some of the arbitrary restrictions he agreed to when he was trying to prove a point to his sister.) I think it's fun that his readers have started to give him tips and suggestions for finding other great bargains, which helps him keep his costs even lower!

Note: Here are some past GRS stories about extreme personal finance: One month as a freegan, How to pay off your mortgage in three years, The man without money, and the king of extremism, Don Schrader, who lives on $10 a day. Also welcome Lifehacker readers!

The four pillars of investing

Thoughts on a scooter-based lifestyle

Yes! Sign up and get your free gift
74 Comments
Oldest
Newest Most Voted
Inline Feedbacks
View all comments