Financial advice from my father (when I was nineteen) 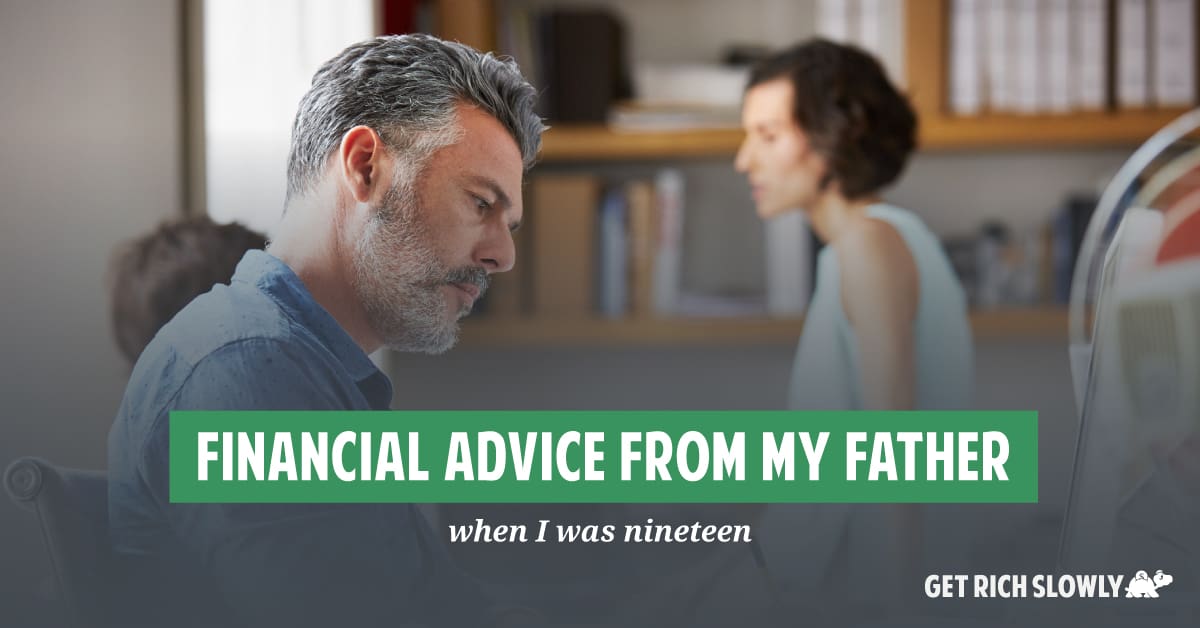 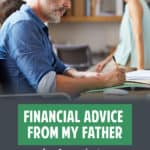 “Who was there for your father when he died?” Kim asked me a few moments ago. She's interested in becoming a death doula, so she's reading a book about end-of-life care.

“It's odd you should ask that today,” I said after I told her the story of my father's six-year battle with cancer.

“Today is the equivalent day in my life as the day when Dad died in his,” I said. “It's ten days until I turn fifty. Dad died ten days before his fiftieth birthday. So, it's a somber day for me. I'll be thinking of him all day.”

Actually, I've been thinking of Dad all week.

It started when I published Naomi Veak's story about how she learned to stop feeling hopeless about money. In that article, Veak shared a letter her mother sent her when she was nineteen years old. Veak was a poor kid at a rich school, and she was struggling to figure out finances. Her mother offered some words of wisdom.

Everything that follows — starting with the title “J.D.'s Points to Ponder” — is from my father except that I've added a few notes in order to provide context to some of the things Dad wrote. (If you're super interested, I've uploaded a PDF version of Dad's letter.)

Here's my father's financial advice to me when I was nineteen years old. (This is unedited. All misspellings are his.)

Warning — Make sure you read them all. There may be some surprises in them so read them all or you will miss them.

#1 Your scholarship is irreplacable. There is no way that you or I can make up $9500.00 a year difference. Study comes first. Before you panic, read on. I hear you talk about working and unless I missed something somewhere you are talking 32 hours a week at least or was that 24 hours a month on campus?

J.D.'s note: I was fortunate to attend Willamette on a full merit scholarship, otherwise I wouldn't have been able to afford it. During my sophomore year, I really did work 32 hours per week. I worked three (sometimes four) part-time jobs.

#2 You were successful at saving a little over $1000.00 this summer. That's an achievement for you. We will try to do better next summer won't we.

#5 You used to play lots of video games. One of them had a rocket and you had an energy level you had to worry about. Energy was used to travel and to shoot at the enemy. Life is a big videogame. In our society money is the energy. There are certain things you have to or should do so make sure don't shoot so many asteroids just for the fun of it that you deplete your energy level and someone has to flash on your screen —GAME OVER—.

#6 Girls can be handy. They are nice to talk to and smooch and some times they take pity on poor helpless males and cook them a meal + iron for them.

#7 I have two ounces of yellow metal left among other things. A good inducement to get your father thinking the right direction would be for you to make a budget and keep track of how well you stick to it.

J.D.'s note: As I've mentioned before, my father was into gold. But he was dumb about it. He bought high and sold low. Here, he's suggesting he might give me an ounce or two of his gold if I keep a budget.

#8 While we are on the subject let me throw out some ideas that would point to reasons for subconscious compulsive spending.

a. When you were little mom was busy in the business and would buy you a new toy almost everyday. It was a way of saying “I feel so guilty — here, this toy is my love for you.”

Your dad played the same game only it was in large a grand ways — tropical fish instead of gold fish etc.

The result would be a compulsion to spend when lonely. The cure is to “look at them and sigh and know they love you.” You are a big boy now and it is time to say goodby to that part of parenting you never had. Please don't wait till you're 40 to do so. I can think of a zillion mistakes we made but I will guartee [sic] you that we did the best we knew how. The answer is for you to identify and acknowledge the mistakes for what they are. Then you will be able to see the love that was there too and compulsion will leave.

b. Don't forget the Saint Helens tee shirts. I can bet you tap into those feelings a dozen times a day as you walk around campus and compare your situation with that of some of the others. Spending and collecting is a way of trying to prove that you have it too.

J.D.'s note: In 1980, things were especially tight for my parents. Dad was unemployed and there was little money to buy clothes for three growing boys. Before I started sixth grade that fall, Mom shopped the close-out racks. Some of the t-shirts she got me commemorated the Mount St. Helens eruption a few months earlier. I hated those shirts and was embarrassed to wear them, but my parents made me do so.

If this is the case the cure is to focus on the objective — getting through school — and realizing that the “it” that they have is privelege that come with wealthy parents. No matter what you spend you will not create wealthy parents. Focus on the “it” that you have that no amount of money can buy. Looks, brains, nice to be around, kindness, talent to name a few. Just remember, “you never saw a fish wishing he were a frog.”

J.D.'s note: Looking back with 2019 eyes, I find it interesting that my father mentions “privilege” here. Remember, Dad had a love-hate relationship with wealth. He wanted to get rich himself, but he resented the folks who already had money.

#9 Your parents love you! We talk about you everyday. it wouldn't hurt to call sometimes and invite them down for a minute or two. They might come with bags of groceries in each arm.

#10 I know the time will come when you may go on an adventure such as a move out of state or a trip to Australia or whatever else crosses that mind of yours. We will probably throw out all kinds of cautions. That's just what parents do but follow your dreams anyhow. Please don't ever move off without letting us know where you are and dropping a note once in a while just to say your OK. Parents have spent 18 years listening to your every breath and loosing sleep if you missed a breath and they just can't get out of that habit easily. You can do most anything you want and you will have our approval as long as we know you are OK.

#11 We need to get the title transfered on the car + some repairs made soon. The new guy I hired is also a mechanic so plan a Saturday out here real soon.

#12 If you maintain your apartment address over the summer it may be worth $3500 in grants next fall. You can come stay with us but you need to prove you are living on your own to be considered on your own income.

Final Thoughts
Looking back, it's clear that I inherited most of my money blueprint from my mother and father. I picked up the same bad habits they had. But being a poor boy at a rich school led me to develop some new bad habits of my own. Dad could see these bad habits forming and was trying to help me before I got into trouble.

I didn't heed his advice, obviously, and so ended up deep in debt. How would my life have been different if I'd listened to his words of warning? I don't know.

Although my relationship with Dad was strained at the end of his life, I admired him a great deal. He had his faults — including poor money skills — but he was a dreamer, and he loved his family.

Traffic violations and your auto insurance

As featured in:
70 shares