I believe that each of us possesses a money blueprint, a mental map that defines our behaviors and attitudes toward money. Our basic blueprints come from our parents. They're altered through our interactions with friends and co-workers. And, of course, our own experiences lead us to modify and add to our money blueprints.

“You know what would be interesting,” Michael suggested. “You should write your financial autobiography.”

“Nobody would want to read that,” I said, grimacing. Michael laughed.

“Well, they probably wouldn't want to read it if you made it too long,” he said. “I don't mean you should write a book about it. Just do a long blog post. Write your financial autobiography, then look to see how your past has affected your money blueprint.”

I liked the idea, but could't understand how it would work in practice.

Then, last week, I read Alexander Chee's 5000-word essay at Buzzfeed (yes, really — Buzzfeed) about how deeply money and pain are connected in his life. This is a financial autobiography. And this shows clearly how experience creates a money blueprint.

In 2000, Chee unexpectedly became the manager of his church's outreach program for the homeless. To his surprise, he had no problem with the position. He managed its money effectively. Planning and budgeting were easy. This was vastly different to his financial life at home.

The calm with which I did this every week was not visible in the rest of my life. In the apartment I returned to after those volunteer shifts, my closet stacked full with boxes of files and receipts going back 15 years. Many were unpaid bills, missed payments, or collection notices. Letters from the IRS. A personal organizer I had hired a few years before had said, looking them over, “Oh, wow, you don’t need these,” then she laughed and told me to throw all the papers away. But I could not. When I eventually moved out in 2004, I moved with those boxes.

Chee gradually came to realize that while he was perfectly competent with his church's money, something in his psychology was preventing him from behaving similarly with his own money. In his personal life, money and pain had become intertwined. 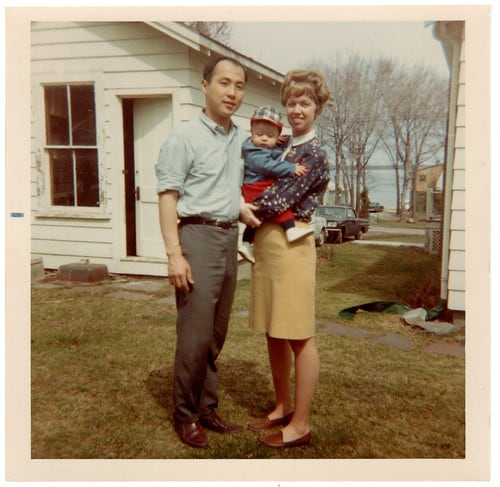 Chee's father died young — at the age of 43. He also died relatively wealthy and without a will. The state of Maine divided his estate, part of which became a trust for the 15-year-old Chee. When he turned 18, he gained access to that account.

“The first thing I did with my money was part rebellion, part panegyric,” Chee writes. “My father had loved fast cars and expensive ones, both, and so I bought what I thought he’d want for me, a black Alfa Romeo.”

Aside from this one expensive indulgence, Chee tried to make good use of his money. He used it to obtain a college degree, to turn himself into a writer. His trust fund lasted nine years. “For those nine years, I felt both invulnerable and doomed, under the protection of a spell that I knew to be dwindling in power.”

Throughout this long essay, Chee offers a variety of anecdotes to illustrate how he developed his money blueprint. Like my parents, his mother and father never really gave him overt lessons in personal finance. Instead, Chee learned about money from the way his parents acted.

Both of my parents had worked hard for what they had — my father, with his older brother, had scavenged for food from abandoned army supply trucks in Seoul during the Korean War. My mother had cleaned hotel rooms during the summer for the money she used to buy the car she drove away from Maine. My father believed money was for spending, and my mother believed it should never be spent. Her clothes were handmade also — for much of her life, she made them herself. She was as stylish as my father, but by her own hand.

This article is filled with financial lessons on everthing from the importance of estate planning to the power of thrift. More than that, it's packed with examples of why smart money management isn't simply about math. For most of us, it's a complex subject loaded with psychological and emotional issues. And when relationships are involved, those issues are accentuated.

To the extent I have survived myself thus far, it began…when I realized I treated money emotionally and decided to treat myself as I would anyone else I was taking care of. Ordinary thrift and self-forgiveness were the payday only I could provide, no matter my professional or financial circumstances, and this realization was the gift of that time, as close to a Unitarian grace as I think I’ll ever get.

Chee's article is a true financial autobiography. After reading it, I think I know what my friend Michael was asking me to do.

Sometime in the next couple of weeks, I intend to set aside a few hours to write my own financial autobiography. I've shared bits and pieces of it over the years, but I've never tried to assemble these individual stories into a more coherent whole.

I suspect that many Get Rich Slowly readers could profit from writing their financial autobiographies, too.

When I do mine, I plan on free writing. I'll do a massive stream of consciousness braindump. I've thought enough about this subject and my own history that this should yield an instructive story.

If you want to do this exercise but need some prompting to help you begin, consider exploring the following questions:

If you want more help, the Faith and Money Network has a free thee-page PDF meant to help people prepare their own money autobiographies. (This guide comes from a religious perspective, but it's still useful if like me you're non-religious. Just ignore the churchy bits!)

A financial autobiography? What a great exercise in self-awareness that can lead to improvements in one’s behaviors and therefore successes! The questions prompted me to remember my mother taking me to the local branch of a regional bank at the age of 12 to open my very own bank account with about $40 I had saved. That was a lot back in the 1960s, when my allowance was a very generous $2.50 a week and I was paid $3.00 an hour for tutoring a neighborhood girl in reading, and a little less for my babysitting jobs. We sat in the… Read more »

That sounds like a great project if you have time for it. I’m happy with where I am and I’m not really interested in digging into the past.
The only big issue I have right now is that I tend to be cheap. That’s curable, though.

This is a very interesting post as I believe that my childhood has had a profound impact on how I view money. My wife and I have a young son now and I always wonder how his memories will shape his future. I mostly learned about money second had, I grew up with grandparents where my grandfather was very strict and conservative with money and my grandmother was more lenient and often snuck in things that my grandfather wasn’t allowed to know because he would have been furious. They both earned money from work, but my grandfather was definitely the… Read more »

I am fortunate to have been raised by parents who taught the virtues of saving up, paying cash, taking care of/repairing things, buying used, and delaying gratification. And, above all, avoiding debt except for absolute necessities. There were no fights over money in my house — for me money is not a source of anxiety. I was given an an allowance that started with $1/week and went as high as $20/week before I got my first student worker job in college. We could spend our money however we liked, but the rule was that, when spent, the money was gone… Read more »