From the Frugal Kitchen: How to Make Bread-and-Butter Pickle Slices

This easy and delicious recipe for bread & butter pickles is perfect for a beginner. Regardless of your skill level, you'll produce canned pickles that you'll be proud to serve. Because of the high acid level in pickled foods, you can process them in a pot of boiling water, rather than a pressure canner. And packing slices into jars is much simpler than organizing whole pickles like dills or sweet gherkins to fit neatly into a jar. These pickle slices are nice in sandwiches, chopped in tuna and pasta salads, or eaten on their own. 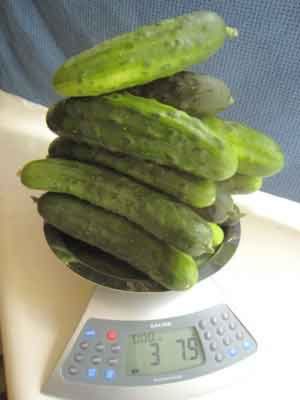 Look for cucumbers that are meant for pickling or that have been picked when they are no bigger around than 1-1/2 inches. If you are doing large-scale canning, ask your produce vendor if you can buy in bulk. This year, I found a 25-pound box of organic pickling cucumbers for $12. Even after discarding a number of bruised vegetables, that was enough to make over 14 quarts (28 pints) of pickles. 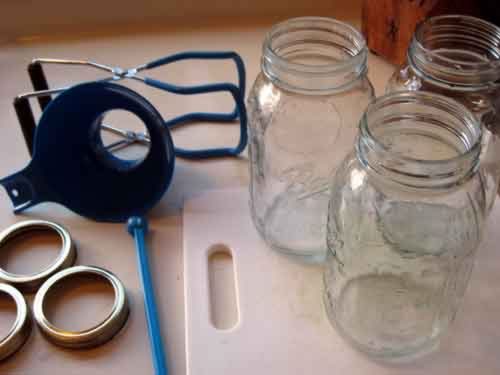 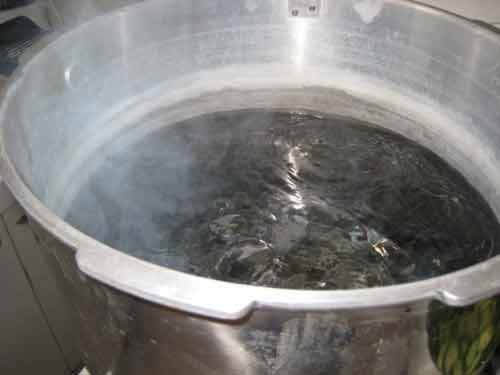 In a 5-quart pot (non-aluminum), combine sugar, vinegar, water and spices. Bring to a boil, stirring to dissolve sugar. 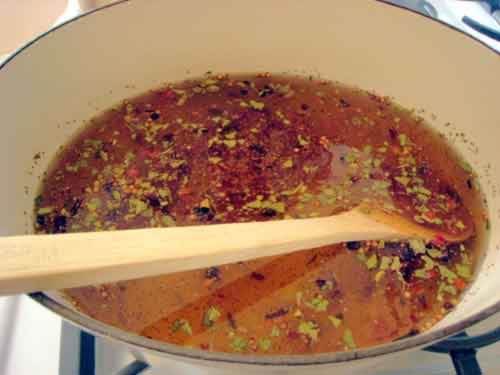 Add cucumber slices. Return to a boil, stirring gently and trying to submerge slices as they cook. 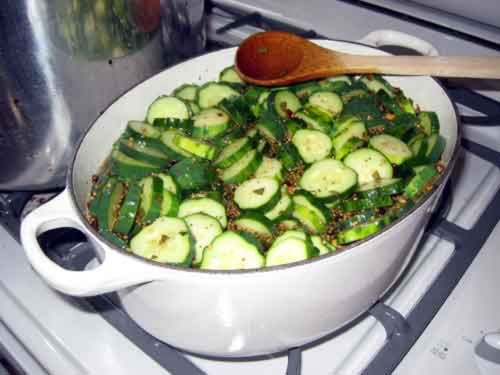 When the pot returns to a boil, boil for 90 seconds, then remove from heat. The slices should have changed from a bright cucumber green to a darker pickle green. 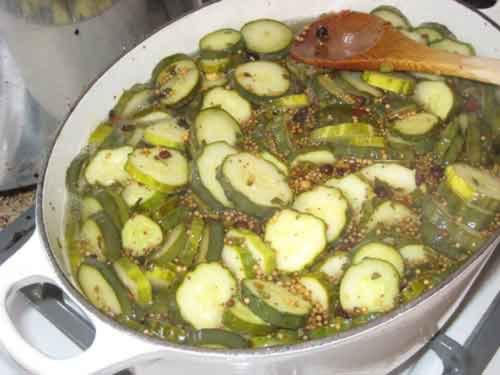 Using tongs or a slotted spoon, fill hot jars* with pickles slices, then fill each with pickling liquid, leaving 1/8″ headspace. (You may have extra brine; you can refrigerate this up to a week if you are making another batch soon.) Wipe rims clean with a damp paper towel and add lids and rings. 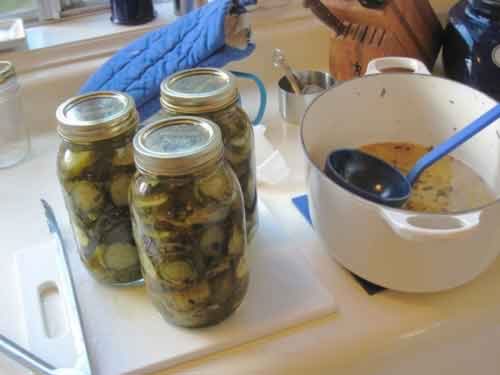 Process in a boiling water canner — 20 minutes for quarts, 10 minutes for pints. Begin timing when the water has returned to a boil after you submerge your jars.

Using a jar lifter, remove jars to a folded kitchen towel. Let cool 24 hours and make sure the jars have sealed. The lids should be sucked down in a such a way that they won't “pop” when you press on them. If not, you can add a new lid and process again, or store your pickles in the refrigerator. Sealed jars can be stored one year or more. Remove the rings for storage to avoid them rusting onto the jars. (I usually put a ring back on if I am giving as a gift, in order to avoid accidental opening during transport.) 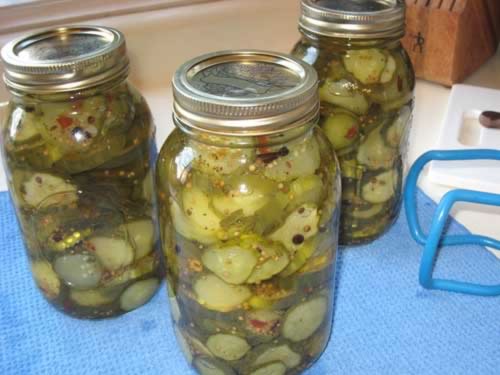 *Hot foods should go into hot jars to avoid shocking and potentially cracking the glass. You can heat your jars before filling them by placing them in the boiling water bath as it heats up, or by running them through the dishwasher or using the dishwasher's dry cycle.

How to get rid of ants (Without calling an exterminator)

Where to find affordable furniture

5 times to leave landscaping to the professionals

Yes! Sign up and get your free gift
25 Comments
Oldest
Newest Most Voted
Inline Feedbacks
View all comments

Here’s an even easier pickle recipe for beginners. These make your everyday run of the mill dill pickle slices great for putting on hamburgers. 3 quarts of water 1 quart of vinegar 1 cup of canning salt 3 1/2 pounds of cukes cut into slices Whole dill (optional) Combine all ingredients except dill and bring to a boil. Get your jars ready – this makes 4 – 6 quarts or 8 – 12 pints depending on how well you pack your jars. Boil the jars to ensure they are sterile (boil rings as well especially if pre-used.) Remove jars and… Read more »

My mom’s specialty was bread and butter pickles. She made tons of them, from cucumbers grown in her garden, from a recipe almost exactly like yours. So I have vast experience with them. And let me inform you of a sad fact: NOBODY likes bread and butter pickles. I beg you, do not give these as gifts. When my Mom died and I cleared out her house, I found a sealed jar of her infamous pickles left in the pantry. They must have been sitting there for years, nobody wanted them. I sure didn’t want them, so I offered the… Read more »

My mother-in-law made bread and butter pickles, and, contrary to the universal law stated above, I like them. I made my own from her recipe a few years ago, but I usually just buy them at the store. You should make pickles because you enjoy it, not to save money, unless you eat an astonishing volume of pickles. As I recall her saying, in her experience, it was not essential that the lids seal (although they usually did). In fact, she would just spoon the boiling hot stuff into a jar and put the lid on, with no “processing” and… Read more »

Where did you get that jar lifter? I have been looking everywhere for one!

Jeremy: The jar lifter can be purchased at WalMart, Winn Dixie or Tractor Supply. They are seasonal and with the pickling items.

I made these pickles this year using Kris’s recipe and they were positively wonderful.

I just made bread and butter pickles this week, too, and they were soooo good. Much better flavor than store-bought. But I would suggest processing them in the boiling-water canner for safety … sometimes you can find a canner at thrift stores, otherwise at the hardware store (where they probably carry jar lifters, too!).

I am so tempted to make these again. Love ’em!
Thanks for the recipe (and a really cool blog!)

but are they crunchy? my mom cans dill pickles every year, but they never taste as good as claussen pickles, mostly because hers just aren’t that crunchy. she must boil them too long or something.

My mother-in-law, Gertie Cardinal, put carrot sticks in her pickles. The jars looked beautiful with the splash of orange. I like the carrots better myself. So why not add some slices to the bread and butter pickles?

These pickles are very crunchy. The key to cruncy pickles is to not boil them for longer than the recipe says. If you really want crunch add about 1/2 tsp of alum to the jar.

You can find the jar lifter at WalMart in the kitchen section with canning supplies…it comes in a 2-piece kit with the funnel. I just saw it there yesterday.

I love bread and butter pickles, but am unable to eat very much in the way of fruits or vegetables. Woe is me! In the past, I’ve eaten my way through an entire jar of homemade B&B pickles and was sick as a dog for days afterwards.

But that period of time between that first bite and the first ominous rumble from my guts was pure heaven. Yum!

Can you tell me the origin of the name “Bread and Butter” pickles?

I would like to add that while our mothers and grandmothers may have canned pickles and other high acid foods by heating and putting in hot jars and sealing with lids that had been in boiling water, this is no longer considered to be a safe way to process these foods. It is recommended that these be processed in a boiling water bath to reduce the chance of bacterial contamination.

My mom always told me that these pickles were called bread-and-butter because they were good enough to eat with just bread and butter. To this day one of my favorite sandwiches is made by covering a slice of bread with peanut butter, adding a heap of bread-and-butter pickles (drained), and covering with a second slice of bread.

I am in a pickle!! I just made a batch of my late-MomÂ´s Bread and Butter pickles – my familyÂ´s favorites. Her recipe was an “open-kettle” recipe and didnot require processing. Now I read (after the fact) that this method is dangerous and not to be recommended. I am sitting here in Europe and have no one to ask. How can I adjust the cooking process so that the crunchiness is not lost? (I only heat the pickles to just below boiling before filling into jars). How long must I process the jars for safety? (.75 and 1-liter jars) Is… Read more »

Mimi, You can save your European pickle recipe. First, beginning with 75*F bottles (summer room temperature) you can then hot water bath them. Don’t shock your jars and have them crack open by plunging in boiling water. Fill your big pot with hot but not boiling water, and put your jars in still room temperature. Process your jars (.75 and 1-liter jars) in a boiling hot water bath canner for 10 minutes. The reason I say 10 and not 15 is because it will take you at least 5 minutes for your cool pickles in hot water to reach boiling… Read more »

I just found a quart of bread and butter pickles I canned 2o years ago just before I got married. Forgot all about it. My 16 year old vegetable hating son loved them and is asking me to make more this year. As soon as I get enough cucumbers from my garden I will. I keep my canner on my stove all summer, ready for the next batch of whatever.

I just tasted “Hot Bread & Butter Pickles” and they were great. I noticed that the repecie at the top included 1 1/2 tbs pickling spices which included chilies, but didn’t include the ratio of spices. Or do you use just one of those spices. If you use only one, for “hot” pickles do you use full chilie peppers?

Why do you have to wait six weeks prior to eating the pickles?

I can’t wait to get started making these. My paternal grandmother made these as well as my mother. I have just now had enough home grown cucumbers to make them for my family. Am so excited to find this recipe.

Just found your recipe and it is so simple that I am getting the cucumbers ready as soon as I get off here. Thanks so much for all the good sounding recipes. I always have soft B&B pickles but thought they were supposed to be. Even the boughten ones are softer. Also, the boughten ones get a strong vinegar taste after being opened a while, the home-canned ones do not.

If you don’t like bread and butter pickles, then you haven’t found the right recipe! I used to hate them until a friend at church brought some. WOW!! They were her MIL’s recipe and are excellent. The OLD recipes are better than the newer ones, IMHO. Great way to use up excess cucumbers too.