Frugality in Practice: At the Movies

It's the peak of the summer movie season. What's a frugal person to do? Ticket prices are outrageous, and food prices are worse. $3.50 for a package of Twizzlers? Give me a break!

In the comments to Wednesday's The Hidden Fee Econcomy, Rhea suggested: “Always bring your own water or soda to the movie theater.” 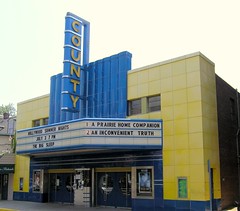 This is excellent advice. Why pay $3.00 for a bottle of water when you can bring your own for 25 cents? (Or less!) A trip to the movie theater doesn't have to be a money pit. It's possible to be a frugal moviegoer.

A great way to start saving money is to attend matinees. These aren't quite the bargains they once were — matinee prices have increased even more quickly than regular prices — but they're still cheap. And the crowds are smaller.

Cheaper still are second-run movie houses. If you're willing to wait a couple weeks, you can see films for three or four bucks. The facilities at second-run houses generally aren't as good, but I've never been bothered by the absence of Sensurround.

In practice, I do what I can to avoid the multiplexes. I spend plenty of time at the jumbo theaters seeing movies with friends, but when I'm on my own, I opt for smaller venues. In Portland, there are several older theaters that charge much less for admission and snacks than the big chains do. Because these theaters are from another generation, I get a nostalgia kick, too: I can remember coming to these places as a boy, when they were the latest, greatest venues.

Though I don't do it often, sometimes I use coupons to get tickets cheap. I've collected them from a variety of sources: cereal boxes, Entertainment books, and even the theaters themselves sometimes. Coupons aren't ubiquitous, but they are available. Watch for them.

You can sometimes get movie passes if you complain about poor service or a lousy experience. If you have a problem, speak to the manager. Don't be a martyr. Your voice will help the theater improve quality. It can also yield a couple of free passes. (But don't complain just to get passes.)

One of the best places to save money at the movies is on food. Beware the combo deals — they're often not deals at all. One theater in town offers a combo deal on popcorn, candy, and a drink. But if you total the individual items, it's the same prices as the combo. There's no savings at all. It's merely a ploy to get people to order all three at once when they might not have done so otherwise.

Buying food at the theater can be expensive. I buy a lot of popcorn and Red Vines over the course of the year, but my wife and I often bring our own snacks. When we think of it, we bring food from home: fruit, crackers, cheese. This helps us save money and eat healthier food. Theaters frown on this, of course — they make most of their money from concessions — but I've never been called on it. (If I were confronted, I'd comply without complaint.)

Do perfect movie theaters exist? Here in Portland they do. McMenamins, a local brewery, has converted a series of old buildings into cheap theaters. They charge $3 for admission and offer reasonably-priced concessions, including beer and pizza and pretzels. These theaters show second-run films (Mission Impossible 3 and V for Vendetta are playing now) and old favorites (we saw The Matrix at one theater a couple of years ago). It's a fantastic movie-going experience. The customer has a great time and doesn't feel ripped off.

The value of human capital

Your money blueprint — and how it shapes your world

Everyone hates a winner: How to cope with haters

The Compound Return Marathon: Which Retirement Strategy Will Win?

Yes! Sign up and get your free gift
10 Comments
Oldest
Newest Most Voted
Inline Feedbacks
View all comments

If there is a Kerasotes theater in your area, you could join the Five Buck Club. This can be used on movies that are available for discounts, usually after being in the theater for two weeks.

My wife and I both have a card. Every week you receive an email displaying what movies are in the five buck club.

This is usually cheaper than matinee prices.

If you have kids, the theater chains have summer daytime movies cheap. I recently wrote about how I bought 10 movie admissions for $9. I often take me own snacks too. Good post!

“This is excellent advice. Why pay $3.00 for a bottle of water when you can bring your own for 25 cents? (Or less!) A trip to the movie theater doesn’t have to be a money pit. It’s possible to be a frugal moviegoer.” Show me one theater that allows you to bring in your own refreshments? We usually bring some candy in my fiancee’s purse, or in a large pocket, but where are we gonna smuggle in a bottle of water? (Not that I would, that would be breaking the rules. We know that rulebreakers are helping the terrorists win,… Read more »

You can buy unrestricted AMC Theaters vouchers from Costco for $15 a pair, which is a 25% savings from the box office price here in San Francisco. They are also available in 5-packs online:

One of the reasons why movie ticket prices are the same across the board is because theatres make money off of concessions. If they have to start making a profit off ticket prices I think the movie industry will drop like a stone.

I’m going to give an “alternative” tip:

If you’re planning to travel overseas to one of the Asian countries – you can save a lot of money by seeing all your newly released movies while you’re there for for nothing more than US$3-4.

And if you’re travelling or reside in Australia – all cinemas discount their tickets on a Tuesday.

It is also possible to go for the entire 2 to 2.5 hour movie without eating or drinking anything. Crazy but true. I’ve done it myself.

(I’ve never actually done this myself, but…)

If you’re a AAA member, they offer discounted movie coupon to various theater chains. From this page (which may not work due to zip code requirements) of Southern New England member benefits:

You can purchase them online, or, i’m pretty sure, at a AAA branch location.

My husband manages a movie theatre. I used to think much like you did about the food there, but he says:

Make every movie a matinee:
Just use the automated ticket machines, and purchase a childs ticket for yourself. Then go in. (Yes it does work for R movies, at least in Canada)