When we still lived in a small town, my wife and I would sometimes walk the half-mile to the high school to catch the latest drama production, or to hear an orchestra concert. These performances were often free (or at least very cheap), and could be just as entertaining as driving into Portland for a night on the town. 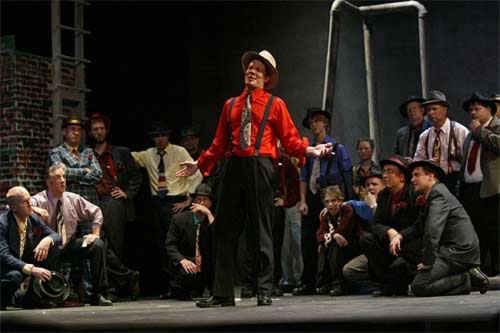 During the summer our town hosted a music festival in the park on Sunday evenings. A new band would come to play each week from late June to early August. Local restaurants set up booths to sell sausages and tacos and lemonade. This was a fine way to end the weekend, listening to music and building social capital while mingling with friends and neighbors.

Three years ago we moved away from that small town and closer to Portland. We haven't yet discovered the community arts programs in our area, though we've ventured afield to see some performances.

One of Kris' co-workers is a member of the Gresham Little Theater, which is housed in a grange hall. Its productions are wholly amateur, but I love them. Portland's Trinity Episcopal Cathedral features a renowned choir that offers performances to the public. (One need not be religious to appreciate the beauty of this music.)

These small, local entertainments are inexpensive. By attending such events we are supporting the efforts of our friends and neighbors. And, to be honest, I really do enjoy these productions more than I do the typical Hollywood blockbuster.

Kris and I went to see our first opera last spring. We paid $150 for tickets plus $50 for a meal before the show. We also had to pay for parking. While we were glad to have been to the opera once, I would have much rather gone to the local high school's production of “Fiddler on the Roof”, which would have cost us $8 for tickets and $2 for Rice Krispie treats at intermission.

There are 10 reader responses to "Frugality in Practice: Cheap Neighborhood Entertainment".