When I was in high school, I was enthralled by the world of fashion. This was the era of Miami Vice, of Tubbs and Crockett and their pastel suits. 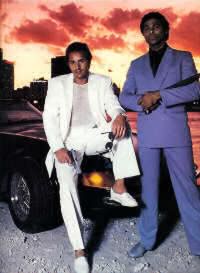 Of Footloose-inspired skinny ties (and knit ties, too). Of Alex P. Keaton. For several years during the mid-eighties I diverted a portion of my precious comic book money to purchase GQ every month. I was trying to absorb the Cool by osmosis.

The trouble was I wasn't Cool. And I was poor. I couldn't afford to look like the men in the magazines. (Plus I was fifteen years old. It's tough to be as cool as Don Johnson when you're only fifteen.) I did my best. I bought a pair of tight white pants. I bought shirts with bold prints. I had a fine collection of argyle socks. I paid attention to designers and labels and the like. I shopped at Nordstrom.

In college this obsession waned. I still shopped at expensive department stores, but I lost the need to be fashionable. In fact, I swung to the other side. It became more important for me to save money on clothes than to look good. I started trying to find good clothes for cheap.

During that bleak decade in which I was wallowing in debt, it became a sort of running gag that I bought all my clothes from Costco. It would have been funny except that it was true. Underwear? From Costco. Socks? From Costco. Shirt? From Costco. Shorts? From Costco. Everything I wore was either a gift or purchased at Costco. At least most of these items were nice. When I wore them, I wasn't offending people who actually had a fashion sense.

That hasn't been the case since I turned frugal. One of my sisters-in-law works in retail fashion; she winces when she sees my outfits. I feel the need to justify myself. “This sweater was just $3 at an estate sale,” I tell her. She probably wears sweaters that cost fifty times as much.

Still, I know that Kris would like for me to look nice. As I lose weight, I feel the urge to at least demonstrate some sense with regards to clothes. I want to begin a campaign of frugal fashion. I'll try to dress well for cheap.

I let loose at Costco the other day for the first time in nearly two years. Using tax-refund money, I bought several pairs of pants that are one-size-too-small (an incentive to continue my wellness program) and half a dozen nice t-shirts. The t-shirts cost $12 each, which hurt. I don't like spending more than $10 for a t-shirt, and I'd prefer to get them for $5.

Kris, who generally disapproves of my clothing purchases, actually liked these choices. “Not bad,” she said. “Now maybe we can get rid of some of your ratty old clothes.” Then she added, “You know, your birthday is coming up. Maybe you could ask for Land's End gift certificates. I could help you shop online. I know how to find deals at their close-out department.”

Sounds good to me!

There are 37 reader responses to "Frugality in Practice: Fashion on a Budget".