Lately, I've been making rumblings about getting in shape again. I want to get fit slowly. The trick is figuring out how to do it. It took a lot of reading and a lot of trial and error to take control of my finances, but I've finally achieved a healthy attitude toward money. Now I hope to do the same with physical fitness. But where to start?

One approach would be to just throw money at the problem. I've been looking at fitness clubs, for example; they offer great exercise equipment and motivational classes all in one facility. But they cost more than a frugal fellow like me wants to pay. (Yes, I've looked into the YMCA and local community centers — there's nothing nearby.)

I've also been fighting the urge to purchase a new bicycle. The Redline 925 makes me drool, but do I really want to spend $800 on bike? What's wrong with the bike I already own?

I was heading for a major expenditure if I didn't formulate a plan, so I sat down and made a list of the free or low-cost fitness alternatives at my disposal. I was surprised to discover how much exercise equipment I already own:

When I look at the list of fitness equipment I already have, it seems ludicrous to pay money to join a gym. I already have a gym. Sure, I don't have a treadmill or an elliptical machine or a fancy weight set, but I have plenty to get me started. I've already paid for this equipment — I might as well get some use from it!

It also seems crazy to purchase a new bike. I have two bikes! What would I do with a third that I cannot do already? Instead, I pulled my touring bike out of storage. It was in sad shape, so I paid the local bike shop a couple hundred dollars to give it an overhaul. Spending this money hurt, but if it's enough to get me back on the road to physical fitness, it's well worth the cost. Good health pays dividends in the long run. 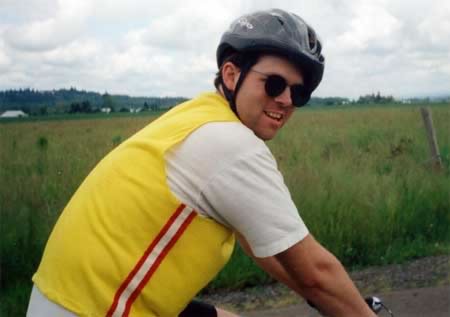 I look like the biggest dork in the world. But I'm on my bike!

For more on this subject:

Oh yeah — I've signed up at We Endure, a social training log that lets you track your progress in a variety of endurance sports (such as cycling, running, and swimming). Here's my profile. I've also created a Get Fit Slowly group that you're welcome to join (even if you don't read Get Fit Slowly). The more the merrier!

The power of yes: A simple way to get more out of life