Frugality in practice: The DIY footrest

I've been working at home for a month now. I like it. The first week was a little scary, but the past few weeks have been immensely productive. I've caught up on e-mail. I've conducted and given some interviews. And I've planned some posts for the future.

Most of my day is spent at my desk writing. The first few days were awful. My wrists hurt. I couldn't find the right chair height to match my keyboard and desk. Eventually I discovered a solution: move the keyboard from the keyboard tray to the desk and raise my seat so that I can use the entire desk surface to support my arms. But this created another problem. Apparently my legs are a little short. When I raised my seat to its maximum height — which is where it needs to be — my toes dangled a couple inches above the floor. I felt like a little boy.

Because an ergonomic office is vital for what I'm doing, I went to the nearby office supply store to buy a footrest. “Sure, we have those,” the helpful salesman said. “Well, we have one model, anyhow,” he added.

He led me to the fax machines to show me their single footrest. (Why was it with the fax machines? I have no idea. I would have put it with the chairs and desks.) I picked it up and was going to buy it, but then I thought to ask, “How much does this cost?”

“Fifty dollars?” I said. I think my jaw dropped.

“No thanks,” I said, putting the footrest back on the shelf. “I could build the most beautiful footrest in the world for $50.”

“Yeah, you probably could,” agreed the helpful salesman.

Originally, I had planned to use a block of wood to prop up my feet, but then decided an actual footrest would be a treat for myself. But not for $50. (Nor $49.99.)

Instead, I drove home and rummaged through my woodpile. Wouldn't you know it? I found an 18″ length of two-by-four and a 12″ scrap of something else. Three nails later, I had my own frugal version of a customizable footrest. 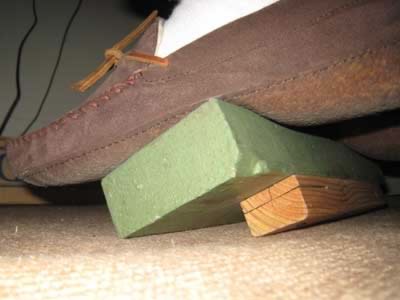 Depending on my mood, I can angle my feet up or down. I can set the block of wood in a high position or a low position. I've been using my footrest for two weeks now. It works great. Sure, it's ugly, but that's okay. I like that it's ugly. Every time I see it, it reminds me that I have an extra $50 in my pocket.

How to refinance your student loans

Slow and steady wins the race

Beware the Insidious Power of Marketing