In a recent article in The Atlantic, Joe Pinsker shared some thoughts on why many ultrarich people aren't satisfied with their wealth.

There seem to be two reasons.

While Pinsker's article is about the ultrarich, I think these tendencies apply to nearly everyone. Even me.

People in the middle class are just as inclined to hop on the hedonic treadmill. They're just as likely to compare what they have to what their friends have. The same goes for those who aren't well off. Even people in poverty get sucked into the comparison game.

In fact, I'd argue that for the poor and middle class, there's an added element. Time and again, statistics show that folks with lower incomes watch tons more TV than people who earn more. (Also here — and many more studies.) When you allow yourself to succumb to the “other world” of film and TV, you're exposed to more ideas about how people should and do live — even if these ideas are baseless. (It's like “The Grand Illusion” by Styx: “Don't be fooled by the radio, the TV, or the magazines. They show you photographs of how your life should be, but they're just someone else's fantasy.”)

The bottom line seems to be that comparing your situation to anyone is likely to lead to trouble. Whether you're comparing yourself to yourself, your family, your friends, or to people in Hollywood productions, doing so leads to a desire for more.

But it doesn't have to be this way.

Over the past few years, the early retirement movement has risen to prominence. People have figured out that they don't have to work for forty or fifty years at jobs they hate. If they manage to increase the gap between their earning and spending — if they can maintain a high saving rate — then then they can achieve financial independence at age fifty. Or forty. Or thirty-five.

Boosting income is a very important part of this equation, of course, but it's not the only piece of the puzzle. The fundamental equation of personal finance is this: Your wealth equals what you earn minus what you spend. Your spending plays a crucial role in how quickly you're able to build wealth and/or achieve your financial goals.

If you want to spend less, it's vital you resist the urge to compare yourself to others.

This is one of the FIRE movement's greatest virtues. From my experience, the folks in the early retirement community have consciously opted out of the comparison game. Thanks largely to the work of Joe Dominguez and Vicki Robin (authors of the classic Your Money or Your Life), financial independence is frequently framed as a life of non-consumption.

Here are some sample quotes from Dominguez and Robin:

Dominguez and Robin helped to found the financial independence movement, and they founded it as non-consumer advocates. It helps too that Mr. Money Mustache, who has helped popularize FIRE in recent years, is also a non-consumer advocate. He's written extensively about topics like hopping off the hedonic treadmill and the virtues of frugality.

Obviously, not everyone interested in early retirement wants to be thrifty. Some people want to achieve financial indendence in order to pursue lives that cost money. They want fancy houses and fancy cars. They do want to have more than the folks around them. And that's fine.

Most of us, however, have come to realize that this fancy shit won't make us happy.

Note: While it's great that there's no pressure to spend in FI circles, I don't want to pretend that it's without competition. In fact, there's a sort of perverse opposite pressure. Too many people want to participate in frugal shaming and financial one-upmanship, racing to see who can spend the least. This sort of bragging is just as unhealthy as competitive spending and I wish that it would stop. But at least competitive frugality helps your finances instead of hurting them.

The Virtue of Frugality

While the non-consumer core of the FIRE movement naturally leads followers toward frugality, frugality has very real financial benefits regardless whether you care about consumption.

Like me, you've probably seen this math a million times. But I hope that, like me, you never tire of its beauty.

If, on the other hand, you spend only $25,000 per year, you have a buffer. If you suffer some sort of catastrophic box injury that prevents you from working for six months, you'll be better able to cope with the crisis. If you lose your job, you only have to find a job that pays $25,000 instead of a job that pays $50,000. By spending less, you give yourself more options for work.

By maintaining an ambitious saving rate of 50 or even 70 percent in your twenties and thirties, you can retire when you're 40 years old instead of 65. This gives you forty years of freedom to do what you want with life rather than fifteen. 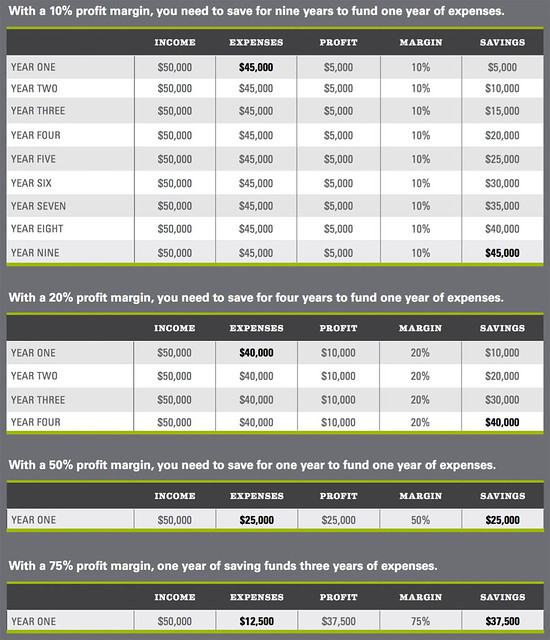 Depriving yourself of certain “standard” choices now means you don't have to lead a life of deprivation when you're older. When you choose to spend less, you're not just boosting your bottom line. You're also gaining the time and freedom that would have been required to earn that money. Thrift isn't deprivation. It's wealth.

So, why am I writing about this? Why have I been thinking so much about frugality lately? After all, I'm hardly a poster boy for thrift. I am by nature a spender. This is a known issue and has been all of my life.

That said, I do aspire to frugality. I admire frugal people. Because frugality is a core value of the early retirement movement, and because I spend much of my time with the FIRE crowd, their inclination toward frugality tends to act as a brake on my own spending. This is a good thing. And because many of my colleagues are non-consumer advocates, I find myself thinking about frugal alternatives (even if I don't always follow through with them).

This year, in particular, I've been focused on spending less. After writing about my plans for 2019 earlier this month, I've done my best to get back to basics. Here are some examples:

Frugality may not a natural thing for me but I can do it. Plus, it's fun. It's fun for me to challenge myself, to look at how and why I engage in consumer behavior — then to think about ways I can “opt out”.

As I mentioned at the start of this article, even the ultrarich compare themselves to others (and to their past selves). I'm just as guilty as anyone else. I always want more. Nothing is ever enough for me. I'm not sure why this is the case but it is. It's a reality that I have to deal with.

“As you take your eyes off the false prize (of more, better, and different stuff), you put them on the real prizes: friends, family, sharing, caring, learning, meeting challenges, intimacy, rest, and being present, connected, and respected. In other words, those best things in life that are free.” — Joe Dominguez and Vicki Robin, Your Money or Your Life

There are 33 reader responses to "Why frugality is an important part of personal finance".