I've had good control of my saving and spending for nearly two years now. I still make poor choices now and then, but they don't have the consequences they would have a decade ago. A decade ago, I was in debt. Today, I am not.

That's one of the advantages of being debt-free: when you do something dumb, the repercussions are not as severe. But I remember a time when each bad choice brought me closer to the brink.

Fumbling in the dark 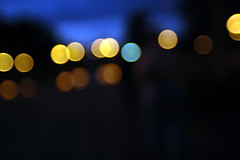 During the 1990s, I had a spending problem. I was a compulsive spender. It's not that I just bought books and comics and compact discs. I spent money on everything. I wanted everything. I had a house full of Stuff, most of which sat unused. I was filling some emotional void by buying.

Saying that makes it sound as if I were aware of the problem. I wasn't. I had a vague idea that my spending was out of control, and carrying $20,000 in maxed-out credit cards was certainly causing me stress, but I didn't know how to stop. Every time I paid one card down a little, I'd find some reason to buy something new. A small part of me knew that I had a problem, but I could not stop myself.

When I look back now, it seems as if I were fumbling in the dark. My wife would tell me how she was saving for retirement, and the idea seemed impossible to me. Because we've always kept separate finances, I would marvel that she had several thousand dollars in savings. I had nothing. I had no savings account. And my checkbook usually had less than a hundred dollars in it. (Sometimes the balance was negative!)

As I spent compulsively — as I accumulated debt — I had no concept of proper money management.

I'm a smart guy. In high school, I won a national award for my “business math” skills. Were you to set me down and tell me, “If you spend more than you earn, you will continue to have debt,” I would have understood you intellectually — but I would have kept spending.

I read about budgets, but never used one. I had Quicken for my computer, and I would use it from time-to-time, but mostly I didn't track my money. There were months at a time when I didn't write anything in my checkbook register. I operated on a sort of voodoo finance system, where I sort of knew how much I had in the bank, but not really.

I had no idea what I was doing with my money. I had no financial goals.

The zeroth stage
Last month, I wrote about a theoretical “third stage” of personal finance, a place one reaches after mastering the basics of money management. At the time, I posited the stages of personal finance might look like this:

I've thought about this a lot over the past few weeks, and I've realized that there are at least two other stages that I didn't include. The fourth (and final) stage is Financial Independence, as defined in Your Money or Your Life. This is the point at which you have “enough — and then some”.

Before that is the zeroth stage of personal finance, where a person doesn't exercise any sort of financial skills at all. Often, he isn't even aware that he should do so. He uses money without thinking. And, more often than not, he lives reactively, spending in response to things outside his life.

My behavior during the 1990s? That was all part of the zeroth stage.

Thinking out loud
During the month of March, I'd like to explore the notion of these stages of money management. Each Sunday I'll write about the next stage. It's a sort of thought experiment.

Generally my articles at Get Rich Slowly are polished and have a point, but these posts may be rambling. They're a chance for me to think out loud, and for you to help me refine the concept of money management “stages”.

What do you think of my model? Am I missing steps? Are the stages not as clearly delineated as I would like to believe? What step are you on right now? What challenges do you face? These are the sorts of things I want to talk about this month. It should be an interesting discussion.

Even if nothing else comes of this, I've realized over the past few weeks that my goal in life is to help as many people as possible escape the zeroth stage of money management. If I can help more people to join me in the third stage, that would be awesome.

There are 77 reader responses to "Fumbling in the Dark".