Give your wealth away: An argument for a secular tithe

This is a guest post from Sierra Black, a long-time GRS reader and the author of ChildWild, a blog where she writes about frugality, sustainable living, and getting her kids to eat kale. Previously at Get Rich Slowly, Black told us about sweating the big stuff and the pitfalls of buying in bulk. 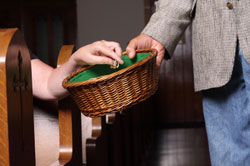 My mother's family is Catholic. They're working class people from Buffalo: nurses, drugstore clerks, steel mill workers. Even though they never had a lot of dollars, they always gave 10% of what they had to the church. Like taxes, that 10% was just something they paid out before spending a dime on themselves.

As an adult I became the first college graduate in my family and adopted the position most of my educated, liberal peers seemed to hold toward charity: give a little, when you can, and feel guilty about not doing it most of the year.

For most of my 20s, I was living beyond my means. With every dollar being spent before it was earned, giving even a few dollars felt like a huge pinch in my messy budget. I was haphazard and frankly not very generous with my giving.

Overall, liberals tend to give less to charity than conservatives. Religious people like the ones I grew up with give more than my secular humanist friends. The working poor are, as a class, the most generous group in America, reliably giving away 4.5% of their income. The middle class are the least generous, giving just 2.5% on average.

In addition to making me and my friends look bad in the conservative press, statistics like that are, as George Will put it, “hostile witnesses” to the idea that “bleeding-heart liberals” actually care more about the poor and disadvantaged than our conservative counterparts.

According to the American Enterprise Institute, the single biggest predictor of a person's charitable giving is religion. People who go to church every week give more money, more consistently.

I think it's time to make secular tithing a middle-class trend. Those of us who don't go to church every Sunday may not have the easy, deeply ingrained tradition of giving my great-grandmother had when she put her little envelope in the offering plate each week. That's no excuse for not giving our share. It's not right for the affluent and secure to let responsibility for maintaining the social safety net rest on the backs of those most likely to need it.

Last year, when I got serious about straightening out my spending habits, I wanted to make charitable giving, like saving, a key part of my financial future.

I adopted something akin to the “balanced money formula”. Instead of allocating 30% to wants, though, I drew up my formula like this: 50% for needs, 10% for charity, 20% for savings and 20% for wants.

My money is not balanced. I'm working hard to repay a pile of credit card debt and continuing to fine tune a frugal lifestyle. My needs and debts suck up most of our income. Because all the “extra” money goes into savings and debt repayment, I'm still living as if we were on the edge financially. Giving hurts. I do it anyway. Every week.

I'm not tithing yet, but I am moving towards it. Here's how:

There are many good organizations doing vital work in the world that depend on charitable gifts to run their operations. These range from the Red Cross to the World Food Program to local groups.

The end of the year is often a time charities need dollars most. To encourage holiday season giving, many have created fun holiday gift programs. My favorite is Heifer International's famous gift catalog, which lets you “give” a cow or a beehive or another livestock animal to a family in the developing world. In reality, of course, what you give them is the money to run their organization, which then distributes livestock to needy families at a local level. It's fun to read their catalog though, and Heifer has one of the lowest overhead ratios of all the large charities.

In closing, a note: Expressing concern about what a charity is going to do with your money is a terrible excuse for not giving. Very few charities are outright frauds, and even the inefficient ones will put more of your dollars toward a good cause than your bank will. If you want to be sure you're getting the most bang for your charitable buck, though, you can investigate organizations at a charity watchdog site before giving.

Note: Get Rich Slowly does not take a stand on religious or political issues. Respectful discussion of these topics is fine; please keep the comments up to their usual high-quality standards.

Sierra Black has spent most of her life broke, no matter how much or how little she earned. She started turning that around with some radical life changes like moving, shifting careers and committing to buying nothing new.

Sierra and her family live in the Boston area. Sustaining a family of five on one salary has led to some creative frugal maneuvers over the years, especially living in an expensive urban area. When Sierra isn't working magic on her family's finances, she writes about personal finance, sustainable living and parenting.

View all posts by Sierra Black

A Lifetime of Work

As featured in:
50 shares