Giving away, not selling, my stuff 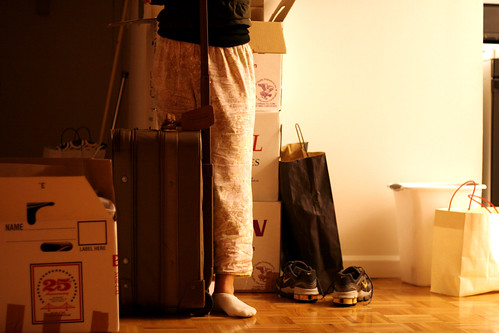 Ever since I cleaned out my closet, I've gotten more and more ruthless, editing more and adding less.

The result of deleting items from drawers and hangers is two large brown boxes taking up floor space in the closet, overflowing with castaways. The boxes have grown into mountains, and I can't walk to the back of my closet anymore.

My intention was to sell these items, which are the nicer things that I actually like, but don't work for one reason or another. I didn't want to drop them off at the consignment shop because the shop keeps 60% of the profit and only accepts in-season clothing, meaning I'd have to keep some of this Stuff in my closet for almost a year. So I planned to sell it on eBay, thinking I could make some of my money back and maybe sell the out-of-season items.

Procrastination or Lack of Motivation?

Month after month passed, and I never got around to selling a single article of clothing. I even bought a cheap postage scale, convinced that the lack of a scale was what was holding me back from listing my Stuff.

But last week I finally realized that there are about a hundred things I'd rather be doing than messing with this pile of Stuff. I didn't want to wash, iron, dry-clean, photograph, upload, list, weigh, package, or mail it. In fact, I'm awful at getting anything in the mail on time, which is why online shopping is my saving grace! I know many people who are eBay aficionados and could blaze through listing my Stuff in no time, but I'm not one of them. I've never even bought anything off eBay. I just lack the interest, and I can't really tell you why.

Anyway, those are my excuses reasons, and so the Stuff continued to clutter my closet floor.

A New Home for Stuff

Whenever I pull clothes for the discard pile, I call my mom so she can decide if there's anything she can use. Mom is a talented seamstress who re-purposes clothing into new things. Once she took a tank top that she bought me 10 years ago for $2 and sewed it into several pairs of doll tights that sold for $5 a pair. (Mom always gets a great ROI.)

She mentioned that there was a dress and shirt she thought were too nice to cut up after all, so she gave them to a teenage mother she knew who was on her own and trying to work and finish school.

The girl liked both items, and we are the same size. You can probably guess where this is going.

It's become obvious that I'm just not going to eBay it, and it's time to let go. Again. And that's the thing of it. Keeping that Stuff in a box is no different than keeping it on hangers. I'm still attached to it. It still takes up space and occupies my thoughts (I can't believe I still haven't listed it, I really hate looking at it every day, I can't remember what the closet floor looks like anymore…)

I felt like I needed to sell to make money back on past purchases, but I soon realized that not only do I not want to bother with it, but it doesn't make sense for me to spend my time this way. My time would probably be better spent working on my business, especially when I consider my hourly rate. Trent at The Simple Dollar said it well when he discussed the value of time, writing “…money is not the only criterion that should be considered in a financial transaction in our lives. Time is often a major concern — and I see it overlooked time and time again.”

Maybe it's not best financial decision. Who knows how much I could have made by selling it? But after considering the time cost, I've elected to be free of the clutter now. And I'm really looking forward to walking into my walk-in closet next week.

Buy it for life: Choosing quality over price

How to spend money (even if you think you shouldn’t)