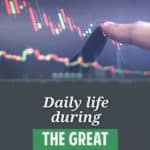 Since the Great Recession of 2008 and 2009, there have been a lot of news stories about how awful everything is. Never mind that most Americans enjoy the best standard of living of any culture in history, people still find things to complain about. Perhaps this is because people lack perspective. They don't realize what life was like in the past or what real hardship is.

The always-excellent Reading Through History channel on YouTube has a seven-minute video that takes us on a tour of what like was like for the typical American family during the Great Depression.

During the Great Depression, nearly one quarter of all Americans were unemployed. Even those who could find jobs struggled to get by. Wages were reduced by as much as 60% — but people were happy to have any sort of income.

The average take-home pay was about $17 per week (or around $900 per year), but many people made less. Prices were lower too, of course: a man's shirt cost about $1, a washing machine cost about $33 (or two weeks of take-home pay). During these lean times, families had to come up with creative ways to economize.

Radio was the most prevalent form of entertainment during the Great Depression. Radio had risen to prominence in the 1920s and became ubiquitous by the end of the 1930s. (Old-time radio is one of my favorite subjects. The first licensed commercial radio station in the U.S. started broadcasting in Pittsburgh on 02 November 1920. In the early years, radio broadcasts were free-wheeling and largely unsponsored. But by the 1930s, the format we're now familiar with from television was starting to settle into place.)

Board games were another popular pastime. Sorry and Monopoly were both released during the 1930s and became huge hits. (True story: When I was growing up during the 1970s, my parents elected not to have a TV. Most of my extended family didn't have television either. As a result, much of my childhood was spent listening to radio and playing boardgames with brothers, cousins, and friends — just as children in the 1930s might have done.)

I'm not saying that there aren't people who have it rough in modern America — there are always people who struggle! — but I think it's important to have some perspective before grousing about how awful the world is today.

Excellent reminder of history. Yes, my parents lived through the Great Depression as children and remembered its lessons for the rest of their (frugal) lives. What’s missing in this video are the numbers of elders who died simply because they were alone and had no pension or financial support (no Social Security in those days until FDR started it, against fierce opposition). FDR didn’t always get things right, but he did much to drag America out of the economic doldrums with New Deal programs to rebuild the infrastructure of the US. People don’t know history. That’s how we got into… Read more »

My grandparents were from this era, and they still held onto some of the habits they formed way back when, like eating really basic meals of cornbread in milk for dinner sometimes. And there was a nice sandwich shop next to the video store I used to work at in college, and I noticed the owner himself would always eat fried bologna. One day I asked him, “Why do you always eat fried bologna when you have all these great sandwich fixings around you???” And he said, “I grew up in the Great Depression, guy, this is what I got… Read more »

My 90 years father lived the great depression. His parents just about had enough money saved up to by a farm before the bank crashed and they lost it all. His dad picked up work whenever he could. Dinner was typically wild berries and wild lettuce that he and his brother found in the forest of Pennsylvania.His mother use to buy the live chicken and kill it herself to save the nickel. Dad use to have to defeather it. He and his brother use to follow the train tracks that they took the coal cars and picked up the coal… Read more »

Great article JD. Both of my parents were born in 1929, my dad was literally born 11 days before the market crashed! So they instilled a Depression-era mindset into me and my brother when we were growing up. Unfortunately sometimes that also included holding onto things to overcompensate for the things they didn’t have when they were younger. So now my mom has a lot of junk in her house and we’re trying to get rid of it. She’s 88, she needs happiness at the end of her life, not useless junk. But the point is very valid one, when… Read more »

This was a really interesting topic. I’ve always been drawn to stories of how little people can survive on, then juxtaposing that against what would describe a hardship in today’s “1st world society”. Many people the world over life the American 1930’s Depression lifestyle…today. I’d like to say we’ve learned from the Great Recession, but I am more skeptical (and I include myself in that). We are still going into debt without adequate savings, and ballooning house prices are once again being used as a measurement of economic health. The Boomers are aging and there will be more stress on… Read more »

If you haven’t read “Great Depression: A Diary” by Benjamin Roth I’d highly recommend it. Very insightful read into what it was like day to day for someone living during the Great Depression.

Excellent perspective piece JD. I think this perspective has been lost as in my entire life things have never been that dire. When the recession happened, it seemed like the world was ending, yet there was still food on the table, and no gas shortages or other amazing feats our elders had to overcome. I would love to see more people realize how amazing they have it (and remember myself more often, too), even those with the least today have far more than others did at that time in our history. We live in amazing times!

I’m from India and have also lived in the U.S. and visited other countries. There are many families that still live like this (washing with hand, staying together etc.) in India and around the world. Just the ability to build a nice cash and reserve cushion for the family is a luxury in itself. If you have that, you are already blessed and are part of the 5% in the world. Got to be thankful! I love these videos that give the right perspective.

My area of study in grad school was Woody Guthrie’s protest music. He was raised during the Great Depression so I have studied that era thoroughly. I think it’s one of the “richest” times in American history. I know that sounds ironic, but when the money was short, people were rich in other ways.