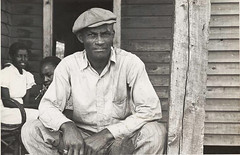 We've heard a lot of rhetoric lately about how this is the worst economy since the Great Depression. Maybe that's true and maybe it isn't, but even if it were, what would it mean? I have no frame of reference for these sorts of claims. They smack of hyperbole, but I can't be sure. In my lifetime, the closest I've come to experiencing anything like the Depression was during the recession of the early 1980s, which was hard on my family.

I don't know anyone who lived through the Great Depression, so to find out what it might have been like, I turned to a book recommended by a couple of GRS readers.

In 1970, writer Studs Terkel published Hard Times: An Oral History of the Great Depression, which features excerpts from over 100 interviews he conducted with those who lived through the 1930s. Terkel spoke with all sorts of people: old and young, rich and poor, famous and not-so-famous, liberal and conservative.

Hard Times is fascinating. It's one thing to read about the Great Depression in textbooks, or to hear it used as leverage in political speeches, but it's another thing entirely to read the experiences of the people who lived through it. And by including the perspectives of so many different people, Terkel is able to paint a richer picture of what things were like. (Hint: Things were much more complex than we're usually told.)

When I think of the Depression, I think of it as being bleak for everyone. I think of Steinbeck's The Grapes of Wrath. I think of bread lines. I think of people struggling to get by. And to be sure, there was plenty of that. Here's an excerpt from Terkel's conversation with an Iowa farmer named Oscar Heline:

He recounts the first farm depression of the Twenties: “We give the land back to the mortgage holder and then we're sued for the remainder — the deficiency judgment — which we have to pay.” After the land boom of the early Twenties, the values declined constantly, until the last years of the decade. “In '28, '29, when it looked like we could see a little blue sky again, we're just getting caught up with the back interest, the Thirties Depression hit.”

“The farmers became desperate. It got so a neighbor wouldn't buy from a neighbor, because the farmer didn't get any of it. It went to the creditors. And it wasn't enough to satisfy them. What's the use of having a farm sale? Why do we permit them to go on? It doesn't cover the debts, it doesn't liquidate the obligation. He's out of business, and it's still hung over him. First, they'd take your farm, then they took your livestock, then your farm machinery. Even your household goods. And they'd move you off. The farmers were almost united. We had penny auction sales. Some neighbor would bid a penny and give it back to the owner.”

Does the description of home values sound familiar? I think there are echoes of our current situation in Heline's account. But Hard Times makes it clear that not everybody suffered, and of those that did, there were varying degrees of suffering.

Here's part of an interview with a man named Edward Burgess who used to work as a printer in Chicago. He didn't suffer like the Iowa farmers, but you can still hear echoes of today's crisis in his story:

I spotted this Studebaker in the window at Twenty-sixth and Michigan. So I says to May, let's buy that car. So we just stopped in, give 'em $600, all we had with us, and bought the car. The sales manager — his name was Compton — I told him that's the one we want. So we just had a couple of fellas push it out and put air in the tires and a couple of gallons of gas and away we went, down South Parkway. So we went all around, down Field Museum…It was a six-wheel job.

The foreman down at Donnely, he said, “You sure did your bit for the Depression.” He bought one, he bought a new Ford. I said, “If everybody would spend ten cents more a day than they ordinarily spent, we'd sneak out of this in a hurry.” (Luaghs.) I said that. My theory, I felt that way. Because we were makin' money. We never got laid off or nothin'. There was no cause to feel otherwise.

Hard Times is divided into over 30 broad sections, each of which explores a specific topic like children, farming, entertainment, labor strive, the New Deal, hobo life, and more.

I find the interviews with average folks more interesting than the interviews with politicians and business leaders, but even those conversations had their moments. For example, here's part of Terkel's discussion with Raymond Moley, who started as an advisor for Franklin Roosevelt before breaking with him and becoming a vocal critic of the New Deal:

The bank rescue of 1933 was probably the turning point of the Depression. When people were able to survive the shock of having all the banks closed, and then see the banks open up, with their money protected, there began to be confidence. Good times were coming. Most of the legislation that came after didn't really help the public. The public helped itself, after it got confidence…A Depression is much like a run on a bank. It's a crisis of confidence.

After reading Hard Times, I feel as if I have a better grasp of our current economic crisis, at least from an historical perspective. If you have a general interest in history, or if like me you've been wanting to obtain first-hand information about the Great Depression, Hard Times shouldn't be missed. Your public library is sure to have a copy.

My financial philosophy: The core tenets of Get Rich Slowly

How much is a clean home worth?

Grading homes: The system I used when picking a new place to live