“Look at this,” Kris said yesterday when she returned from grocery shopping. She held up two yogurt containers for me to see. 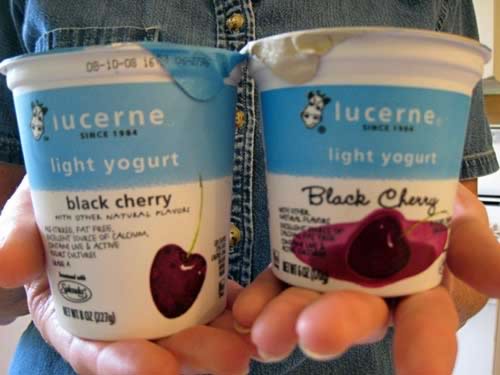 “That one's smaller,” I said. “Did they change the container size?”

I've received several e-mails lately from readers noting the same thing. They go to buy a product they've been using for years, only to discover that the container has shrunk. The price hasn't changed — only the packaging. Reader David Cox, for example, wrote with the following anecdote that mirrors our own:

We went to the grocery last night and one of the items I wanted to get was yogurt. The store always seems to have their brand of yogurt on sale @ 10/$5.00. I was about to scoop up a bunch, when I noticed that they had redesigned the packaging with pretty new colors, but the package seemed a bit smaller. On closer examination, it was.

The new size was 6 oz. of yogurt, while the old style had been 8 oz. The price per package hadn't changed, but the package now contained 25% less product. I thought it was very tricky of them to leave the big sales sticker on the shelf (10/$5.00!!!) just like we were used to seeing, without any thing to warn you of the repackaging. I guess they would claim it was obvious, but it still seems a bit tricky to me.

Is it tricky? I don't know. I understand that manufacturers need to make a profit, but when they reduce the container size instead of raising the price, it does seem a little sneaky. It's as if they're unwilling to raise prices directly, so they take a circuitous route.

I recently had a conversation with a friend who knows a great deal about this subject.

“You see marketing stories like this over and over,” Freeman told me. “Fabric softeners cut the sheets from 40 to 36 — same size box and same price. Ketchup switches from a glass bottle to a smaller plastic bottle and the price stays the same. Some companies mess with cap and lid sizes as a way to increase consumption. Want a bottle of laundry detergent to run out faster? Then increase the cap size slightly. (Many people use a capful per load.)”

Freeman then pointed out other ways companies subtly manipulate spending. “Think of the famous lather, rinse, repeat instructions on shampoo. Like you really need to do that. Same things happen with chips, cereal, and on and on. Just consider: maybe a box of cereal hasn't gone up in price much in the past decade, but I guarantee you that the average box size has certainly decreased.”

Another friend, Jeffrey, chimed in: “I always wondered why, if the cost of packaging is so expensive, do cereal companies reduce the amount inside the box but the leave the size of the box alone?”

“They also do this with cereal bars,” Jeffrey said. “A while back, General Mills came out with Fiber One bars. The box is the same size as all the other boxes but there's only five bars in the box, not the standard six bars that are in every other box. Nature Valley does the same thing with their family size box of granola bars. You open the box and only half of the box has product. It's the same thing as lying but it's disguised as ‘marketing' so it's okay.“

Again, I'm not sure it's lying, but it's obvious that shoppers don't like to be duped this way. But both David's e-mail and Jeffrey's comments reveal they don't appreciate being tricked. They'd rather have the same package size but see the price increase. I would, too.

Food inflation is a hot topic in the United States right now. I think we're all beginning to realize that the things we love cost more. But some of us would rather pay the increased price than have manufacturers try to hide the inflation with packaging.

For more on this subject, take a look at Nickel's thoughts on product packaging. He observes that suggested portion sizes are increasing even as package sizes are decreasing. You may also be interested to read about unit pricing in the GRS archives.

An introduction to square-foot gardening

The Best Ways to Boost Your Retirement

Yes! Sign up and get your free gift
147 Comments
Oldest
Newest Most Voted
Inline Feedbacks
View all comments