High interest: How to choose between checking, savings, and CDs

Written by J.D. Roth
|
|
Comments are off

In a rocky economy, high interest rates are the holy grail of conservative investors, especially those who don't want to invest in bonds. But in this rocky economy, “high interest” hasn't really meant much: High-interest savings accounts are returning below two percent!

Get Rich Slowly readers are just like everybody else. A couple of times a week, I get e-mail from somebody looking for higher interest rates, but puzzled about where to find them. So, inspired by a recent article in Consumer Reports Money Adviser, I'm going to run down the top choices for finding high interest rates.

First, I want to remind you all of one thing: Interest rates aren't likely to rise until the economy improves. Capital One 360 doesn't hate you. Ally Bank isn't trying to rip you off. We're just not in a high-interest-rate environment right now. The government is keeping rates low because they don't want you to save — they want you to pump your money into the stock market or the general economy. Until things turn around, we won't be seeing the high interest rates that were around back in 2006.

So where can you go for high interest rates? Let's look at some options.

In February, I wrote about how to get the best rates on your savings — safely. That article mentioned bank accounts, but it also looked at stocks, bonds, and mutual funds. Today, I'm just looking at high-interest bank accounts.

You usually have to:

If you meet these requirements, you may still find some credit unions and community banks where you can currently earn interest rates of up to about 5 percent on at least a portion of the money in your account. At some banks, you can earn this high interest rate on amounts up to $10,000; at others, it is $25,000. Any money above that cap earns a smaller return. And if you fail to meet the account requirements in any given month, that also triggers the lower interest rate. These rates most likely are offered only to individuals who reside in the local market area of the bank or credit union. (Credit unions require you to join as a member, so be sure to check if you meet the specific membership requirements of the credit union you are interested in.)

How can these banks offer high interest rates on checking accounts? According to the July 2010 issue of Consumer Reports Money Adviser:

Some account requirements — such as banking online and receiving electronic statements — provide cost savings to the financial institutions, while frequent use of debit cards generates fees. Those savings and revenue account for the higher rates.

These accounts are localized, and you will have to search for the best bank in your area. Here in Portland, for example, Advantis Credit Union is offering 1.75% APY on their Fusion Checking (for balances up to $25,000) as long as you meet the monthly requirements (Rate as of December 11, 2016). But you may be able to find higher interest rates elsewhere in the U.S.

In the past, Kiplinger's Personal Finance has named the Charles Schwab High-Yield Investor Checking account its “best checking account of the year.” It currently offers a 0.06% variable APY, and must be tied to a brokerage account. But if a rewards checking account isn't an option for you, the Schwab account may be a good choice. (Rate as of December 11, 2016)

However, our current research also indicates that some credit unions are offering a higher APY on their rewards checking accounts. It might be worth a look.

If you don't want to jump through hoops, a rewards checking account may not be the best option; you may be better off with a high-interest savings account through either a traditional bank or an online bank.

As you search for a high-interest savings account, be sure to look at online banks. 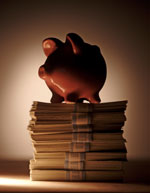 Why? Consider the following:

In its July 2009 issue, the Consumer Reports Money Adviser stated:

“Online banking, despite a rocky start, is becoming the rule rather than the exception.” The newsletter cites research by Forrester Associates that predicts that 76 percent of American households with Internet access will be banking online by next year.

Here are some online banks to consider:

High-interest savings accounts are easy and safe. You don't have to worry about meeting any sort of minimum requirements (except perhaps a minimum balance) in order to earn the high interest rate. And many online banks (and some traditional banks, too) will let you open multiple accounts so you can save for individual goals. But high-interest savings accounts have one big drawback: They generally don't pay as much interest as a rewards checking account or a certificate of deposit.

A final option for earning high interest rates is to use a certificate of deposit (also called a CD). CDs are time deposits: You give your money to a bank and promise not to touch it for a specific amount of time. Opening a CD is very much like making a loan to the bank, which can invest the money however it wants during the period you agree to. In general, the longer you let the bank keep your money, the higher the interest rate you'll receive.

Unlike a savings account, once you put your money into a CD, the interest rate doesn't change. If, as I did in the CD above, you open a six-month certificate of deposit at 3.50 percent, and then interest rates drop to 1.00 percent (as they did after I opened this account), you still earn 3.50 percent for the entire term.

The catch is that CDs are less liquid than other accounts, meaning you can't move money in and out of them like you can with a checking or savings account. If you take your money out of a CD before it matures (that is, before the end of the term), you will be docked interest. And in some cases, you may even lose part of your principal!

Note: Here's a “gotcha” to watch out for with CDs. What happens when your CD matures depends on the arrangements you have made with the bank. Many CDs renew automatically, which may not be what you want. When your term is coming to an end, be sure you know exactly what is going to happen to the money. Don't be afraid to call and ask.

You may find the best CD rates online, but don't forget to check your local bank or credit union; my credit union often has competitive rates. You can learn more about certificates of deposit (including a few tips and tricks) in the GRS archives.

Tip: There is another option for earning high interest rates, but it carries greater risk. Consumer finance companies are subprime lenders who borrow money from folks like you and lend it out at high interest rates to people like my friend Michael, who just filed for bankruptcy. You can get a great return on your money through these places, but your deposits are not insured. I'm not willing to put my money in one of these places, but you might be. My neighbor — the real millionaire next door — has a chunk of change at a local finance company, and it's paying him 4.09 percent. He loves it.

So, which of these options is right for you? You are the only one who can make that call. As always, the key is to shop around for an account that fits your current needs.

You are probably already familiar with my own set-up. High-interest checking accounts don't work for me. I tried one for about a year and my spending habits just didn't meet the requirements. I don't think I once qualified for the high interest rate. Since learning how to use them two years ago, I have used CDs from time to time. Right now, for example, I have the money for our upcoming trip to Europe tucked in a CD, where it's earning a bit of interest until I need the money. But, as I have mentioned many times, most of my savings is with Capital One 360. (That is not to say that you should choose Capital One 360 — there are plenty of other great options out there.)

As always, I am interested to hear what you folks have to say. Do you concern yourself with finding high interest rates? Do you switch banks to find better rates? What sort of system have you found to balance your need for better yields while still letting you use your money the way you want? (And has anyone had success with personal loan sites like Lending Club?)

How to get your free credit report online: A step-by-step guide

Daily life during the Great Depression

Beyond wealth: What happens AFTER you achieve financial independence?