Hostels for adults: Spend travel money where it counts

When I was 23, I stayed at my first (and last) Ritz Carlton, in Palo Alto. It was only a stop on a string of fabulous business hotels from which I'd collected small bars of soap and shoe shine mitts: The Breakers in Palm Beach, Hotel Nikko Beverly Hills, the Pierre and the Plaza and the Waldorf-Astoria and three different W Hotels in New York City — I could go on. Fan-freaking-tastic.

I loved it, but as I was traveling on business, I rarely got to experience much more than the heady delight of opening the door to a room that cost way more than my shoes (even my nicest shoes). I wasn't paying the bill, ultimately; but I would have to pay out of pocket for things such as:

Now that I'm an adult traveling on my own dime, I stay at hostels. 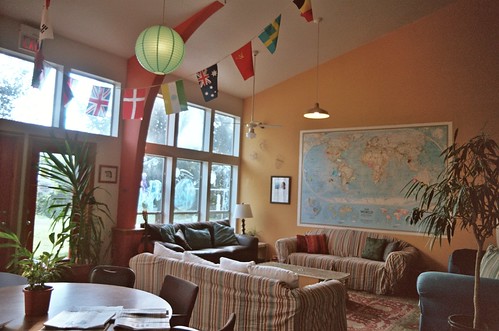 The common area at the Austin hostel.

It is one thing to travel on expense account; a thing I have done quite a lot. But even when a corporate travel associate books my room, I feel a pang of guilt signing an agreement to pay $200 or $300 a night, plus tax. When I'm traveling on my own — either for my freelance work or purely for pleasure — the pang is decidedly different.

The cure for this pang, for me, has been hostels. Despite the image you probably have in your mind, “hostel” does not need to be automatically prefaced by “youth.” While many of the guests are indeed young, the morning I checked out of the San Diego hostel in the trendy Gaslamp district of town, I sent e-mails while a white-haired man next to me explained finance to a 30-something man, drawing charts of opportunity costs in the air.

Oh yes: that Wi-Fi, along with a cook-your-own breakfast that was friendlier and far better than that at a mid-priced executive hotel like Residence Inn or Hampton Inn, was free. In fact, the cupboards at the hostels I've visited in the U.S. are veritably bursting with freebies — free bread from local bakeries, free produce or overstock foods from local markets, free maps, free advice.

The map on the wall at the hostel in Austin had bus routes to all hot neighborhoods and favorite attractions — as well as the airport and Greyhound station — along with the schedule frequencies and last run time. (Cab from airport: $25 plus tip. Bus to airport: $2 even.) A chalkboard at the hostel in San Diego displayed the free events and tours run by hostel staff. There was a pub crawl, and a farmers market tour, and a communal picnic to the classical concerts in the park.

A wonderful meal of vegetable-rich pasta was prepared by another staffer on Thursday night, with a suggested donation of $5, who was so eager for us all to try the food that he thanked me for serving myself the first plate.

Hostel Living Isn't for Everyone 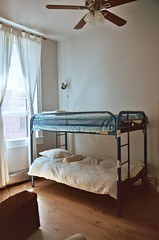 Okay, I'll own up: staying at a hostel is not for those who value their privacy and who are light sleepers. Despite the aforementioned wide customer base for hostels, taking a bunk in a co-ed room will almost always mean you'll see your roommates coming in, possibly a bit toasty, in the wee hours of the night. They're here to experience all the city has to offer, and hostelers have a well-deserved notoriety for sampling the local potables. (You have never seen such quiet as 7 a.m. on a Sunday morning in a hostel common room.)

But I'm the sort of person who always really wants to talk to the person staying next door to me, and at a luxury hotel, that's verboten (unless of course you're looking to hook up). I want to hear why the neighbors are here in the city and what they're planning to do. I like to hear people's stories, and in a hostel, those stories are worn on the sleeve, always about to spill out, possibly in broken English or a language inflected with Australian or Eastern European accents.

Best of all, at a hostel, there's no judgment or guilt. At those fancy $300 a night places, I felt terrible toting my own bags up the elevator (but I really couldn't afford the tip). I struggled over ordering a $15 meal of coffee and granola (which I could expense but I had to pay for in cash, first) or going hungry until I reached the client site. Asking directions to the nearest drug store (so I could buy my own bottled water or snacks) or Starbucks (to use the Wi-Fi for free) or, at one New York hotel, using my laptop in the lobby where there was no charge for internet — but also, no power strip — always made me feel desperate and cheap.

At the hostel? The desk clerk will look at you eagerly if you offer the box of tempura batter you got free at your conference and have no desire to tote home. “Leave it in the staff box!” she'll say, eyes bright with visions of fried eggplant and sweet potatoes.

I did adore the luxury of those storied old-guard hotels. But I don't need another shoe shine mitt and I'm more comfortable around hostel people — those who value frugality more than the appearance of boundless wealth. Those who are there for the story, not the shopping. Those who would rather run where the locals do than wangle good seats at the hottest restaurant.

And the best part comes when you pay your bill (at a hostel, you pay when you arrive, not when you leave). I brought my 8-year-old with me to Austin, and for five nights we paid less than one night at the convention hotel. With the money we saved, I could very nearly pay my mortgage.

Or go on another trip. I've been wanting to get back to New York City…

Sarah is a blogger by trade and a finance geek at heart. She cut her teeth on her first Excel spreadsheet full of financials at the tender age of 21, when she began her investment banking career in First Union's Loan Syndications group. She went on to get her MBA from Wharton, work at Merrill Lynch and fall in love with analyzing company strategy and endless rows of numbers.

She is a freelance financial and (award-winning!) literary writer, working in between baking bread and finding socks for her three little boys in her beloved 1912 Portland, Oregon, home. Sarah's even-more-personal blogging about parenting, food, biking, and life can be found at Cafe Mama.

View all posts by Sarah Gilbert

How to Grow Your First Garden