How I Cut My Television Bill in Half

I've had several requests lately to update my two-year quest to find cheap alternatives to cable television. In March of 2007, Kris and I were paying $65.82 for a deluxe digital cable package that we rarely used – money that could have been used to pay down debt or increase the balance on my savings account. “$65.82 a month isn't a fortune,” I wrote at the time, “but it's a lot of money to pay for something that doesn't get used. If we were big TV watchers maybe the cost could be justified. But we aren't. And it can't.”

To save money, we cut our cable to just the basic channels, which reduced our bill to $11.30/month. We also began to use the iTunes Music Store to subscribe to the shows that we wanted to watch. And over the past year, I've become a fan of Hulu, an online service that allows users to watch many past and current shows for free.

Here's an overview of the tools we use, and how much money we've managed to save.

When we cut our cable bill from $65.82 per month to $11.30, I knew we would save over $50 per month. I also knew that we'd miss a couple of shows we really like. We don't watch a lot of television, but we do like our Battlestar Galactica. So, I made a deal with Kris.

“If you'll let me cut back to basic cable,” I said, “then I'll purchase any shows you want from the iTunes Store.” She was reluctant at the time, but over the past two years, we've found that there really aren't that many shows we want to watch.

Note: Kris and I also use Netflix to watch television. Over the past year, we've consumed seasons of MASH, The Mary Tyler Moore Show, and Foyle's War. I'm not including that $16.99/month in these calculations, however, because we were already using Netflix to do the same thing before we cut our cable. Just be aware that we're spending another $200/year for DVDs by mail. (And, yes, we do get our money's worth.)

We've also found a way to watch certain shows for free. For a short time last year, NBC/Universal and Apple got cranky with each other. NBC/Universal pulled its shows (including Battlestar!) from the iTunes Music Store. What's a geek to do? Answer: watch the shows for free through Hulu, which features content from NBC, Fox, and many other sources. Crisis averted.

Over the past year, I've come to love Hulu. It took some GRS reader encouragement for me to actually explore the site's potential, but now that I know how it works, I'm hooked. Here's the basic premise:

Hulu allows viewers to watch new and classic television programs for free. (The site also includes a small selection of feature films.) Each program includes the normal commercial breaks, just as on television. However, instead of being bombarded by two minutes (or more) of commercials at each break, you're subjected to a single 15- to 60-second ad (that you cannot interrupt). To me, that's a fair trade for free programs.

Most current NBC and Fox programs are available on Hulu, though each show seems to have its own schedule. Older shows offer full seasons. Some shows, like 30 Rock, only offer the “trailing 5 episodes”. That is, you can only watch the most recent 5 episodes from the series. Others, like The Biggest Loser (which I'm now addicted to thanks to readers at Get Fit Slowly) only allow one episode to appear at a time — and it's last week's episode. (So, please — no spoilers about what happened Tuesday night!)

Although Hulu doesn't directly host content from ABC or CBS, it does index these shows, and link to their source pages. So, for example, if you want to use Hulu to watch Lost, you can do so. When you look for the latest episode of Lost, Hulu will redirect you to the ABC website. This is a nice touch. 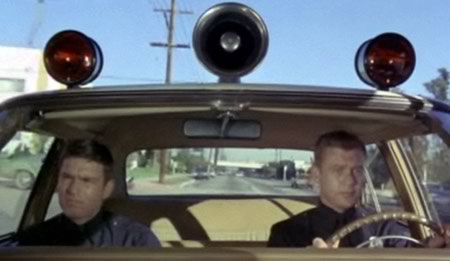 Hulu offers a nice library of classic television, including Adam-12

For me, though, the best part of Hulu is its library of classic television. When I was sick with the flu in early December, I spent two days plowing through old episodes of Adam-12. (Which was much better than I had remembered.) Hulu also includes shows like:

Actually, I just noticed that Gary Vaynerchuk's video wine blog, The Thunder Show, is available on Hulu, too!

My biggest complaint with the site is that navigation is clumsy. It's sometimes difficult for me to find what I'm looking for. (The “browse TV shows alphabetically” view is most useful for me.)

Disclaimer: I know I sound like I'm shilling for Hulu, but I promise you: I'm not being paid to write this. I just think it's a great service, and it's one I would never have fully explored if Get Rich Slowly readers hadn't encouraged me to do so.

Other options
Though these are the tools that Kris and I use for our television consumption, there are other options available. For example, I'm a big fan of the public library for books, but I haven't used it for TV on DVD, though I'm sure that's possible. I'm also aware of Veoh and Joost, though I haven't tried either of them.

Those of you in Western Europe may want to explore Zattoo, a free downloadable app that lets you watch certain television content on your computer. (And, via the comments, Jeremiah Bell notes that Canadian readers can find streaming television at CTV and GlobalTV.)

None of these is going to satisfy those who truly enjoy television. If you must see your show right now, or if you are a fan of live sports, you may have to fork over the dough for a deluxe cable package. I'm content to wait. It saves me money, and it lets me watch shows on my terms.

Footnote: After I finished composing this article, I learned that GRS reader Mike Panic has drafted a fantastic list of websites that stream full TV shows and movies. This is a colossal list, and well-worth bookmarking.
More about...Uncategorized
J.D. Roth

How to lend money to friends (without ruining the relationship)

How to replace six vital documents

Why you must teach your children about money

Frugality in practice: The DIY footrest

As featured in:
5 shares