Mortgage interest rates have been steadily dropping, and they've been doing that for a very long time — so long that most people can't even remember rates higher than, say, 7 or 8 percent. How short our memories are: Those with gray hair remember that rates haven't always been this low. This chart, compiled from Freddie Mac data, shows how the interest rate for 30-year fixed rate mortgages climbed as high as 18 percent not so long ago: 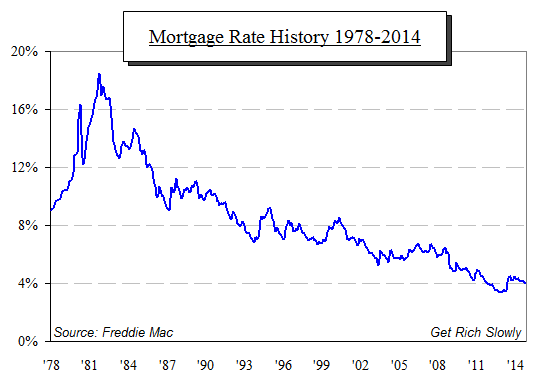 Can you imagine paying 18 percent on your mortgage?

Why bring up what some would regard as ancient history? It is to serve as a warning that the low rates we have had for so long are by no means a sure thing.

So now the question is being asked in many quarters: How long will this drop continue, and how far will it go? Is the 2012 bottom the real bottom or just another rest stop as rates plunge even further?

Here is a chart published on December 11 by Freddie Mac, showing weekly averages of the interest rates for the main types of mortgages for this year: 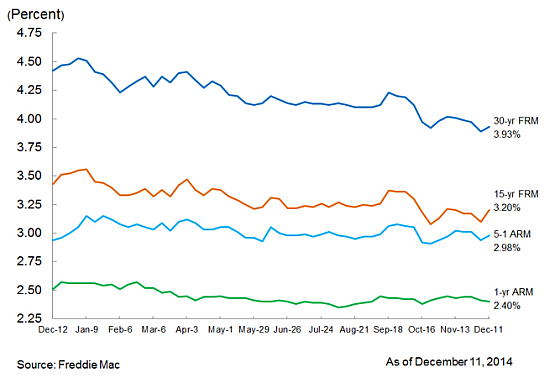 Observe the uptick during the past week of their survey. Although rates are extremely low, the ride may indeed be at its end. So … how long will mortgage rates stay low?

The Federal Reserve probably has more influence over that answer than anyone else. What do they say? The Fed's FOMC (open market committee) meets six times a year to assess the state of the economy and determine what action, if any, they need to take to keep all things economic on track. As most know, the Fed is not a Government institution; it's a private bank, owned by most big banks. They get their license to run the economy from Congress, under the condition that they ensure growth, stability and a job for all.

That mandate (growth, stability and employment) is what gives us the clues we need to figure out how (and when) the Fed will steer the economy. In particular, they look at three statistics:

Gross Domestic Product (GDP) Growth: The GDP is the most commonly used measure of the wealth generated by everyone in the country — individual, corporate and government. The measure looked at is not the value of the GDP, but its growth rate. At present, the economy is growing around 3 percent per year, which is about what they like to see. No need to keep interest rates low on account of GDP growth, then.

Inflation: The Fed uses the PCE price index and the Consumer Price Index (CPI), two measures of inflation at the consumer level. Ever since the Great Recession, they have wanted to see inflation rise to just over 2 percent. However, as of the last set of FOMC minutes, inflation was still hovering between 1.5 to 1.75 percent — not what the Fed wants, because they have a mortal fear of deflation. Low inflation, then, is still cause for them to keep their hands off the interest rate jack.

Employment: As the Great Recession moves further and further into the rear view mirror, unemployment keeps dropping. The latest number shows unemployment of 5.8 percent. The Fed's goal here is 5 percent or less, so it still isn't where they want it to be, especially as the Fed's chair, Janet Yellen, is very aware of other labor statistics such as the labor force participation rate, which are not nearly what they need to be to reflect a healthy economy. So the Fed is still keeping their hands in their pockets, and off the interest rate jack, on account of the employment situation.

Several readers have expressed strong opinions on how accurate or relevant official government statistics are (or aren't). The point here is not the numbers, it's that those are the numbers the Fed is watching (right, wrong or indifferent), and it's the movement in those numbers which prompts the direction they take as they deliver on their mandate to manage our economy. Therefore, the movement in those numbers give us the clues we need to determine which direction interest rates will be moving in general, and how mortgage interest rates in particular will move.

All three numbers are all moving in the direction of the Fed following through on its hint of raising interest rates sometime in late 2015. Mortgage interest rates are not set by the Fed, though — mortgage banks set those on their own. However, in a climate where the Fed begins to pull back on its efforts to expand the money supply and tug interest rates back up, the only logical conclusion is that the bottom we saw in mortgage interest rates toward the end of 2012 will indeed end up being the turning point.

That is a long way of saying chances are that interest rates are not going to stay this low for more than a few months at the outside.

How does this impact you? Two ways:

The interest rate on your mortgage is a significant variable in your personal finances. On a 30-year, $250,000 home loan, a change in interest rate of 1 percent will add up to around $50,000 over the life of the loan — hardly small potatoes.

The implication, therefore, is pretty straightforward — if you had any thoughts of refinancing your home mortgage, now is the time to jump.

Buying a new home is not that straightforward, however. On the one hand, a low interest rate will cut your total cost; but on the other hand, prices in many major markets are approaching pre-recession highs, and buying now will hold the risk that your home's value will drop very soon after you bought it. So that is much more of a toss-up. If you live in a market where recent increases in home prices were modest, this is a good time to buy. In more volatile markets, you will have to judge a little more carefully.

How about you? How will a rise in interest rates, for mortgages or other debt, impact you, and what are you doing about that?

There are 15 reader responses to "How long will mortgage rates stay low?".