It's not often that I find stories about money bloggers in my local newspaper. But that's just what happened when I opened the “Neighbors” section of the Lake Oswego Review last week! 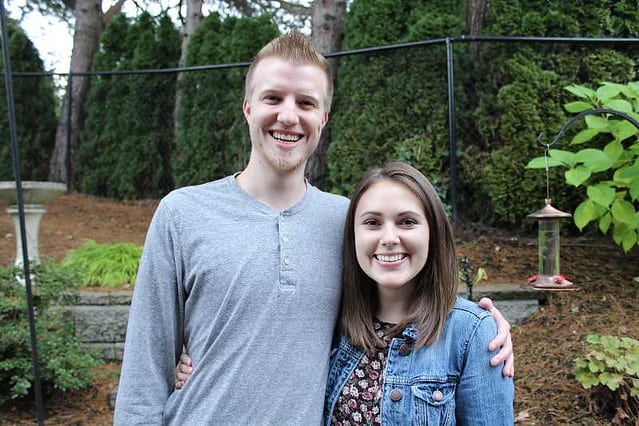 Jacob (26) and Marissa (23) Lyda graduated from college with a combined $87,000 in student debt. With degrees in business management and business accounting, the newly-married couple decided to become money bosses instead of pursuing the standard consumer lifestyle:

As they prepared for a life together, the Lydas took a hard look at how they wanted to attack their mountain of debt. They started by using some of their wedding money to pay off a couple of smaller loans up front before moving into a tiny one-bedroom apartment in Hillsboro.

From there, they budgeted everything. But more than that, they agreed to take an aggressive approach by putting nearly 70 percent of their income toward their student loans and using the remaining 30 percent for other expenses, such as housing, groceries and transportation.

While their friends bought new cars, had children, and went on vacations, they Lydas sat home and watched Netflix. Mentally, it was tough but they persevered. They turned debt reduction into a game.

Because I'm a nerd, I crunched the numbers for those who are curious. If Jacob and Marissa paid $87,000 toward debt and that represents 70% of their disposable income, then they earned about $125,000 after taxes during the past 27 months. That's about $4600 each month or $55,000 per year. (Again, after taxes.) That's not much above the average household income.

Now the Lydas are planning to maintain that 70% saving rate as they prepare to buy a home and save for the future. Because these two are practically neighbors — seriously, they live somewhere nearby — there's a good chance we'll meet someday. When we do, I'll direct them to the shockingly simple math behind early retirement (if they're not already familiar with it). If they can maintain a 70% saving rate, they could be retired in 8.5 years — before they turn 35. How cool is that?

From the newspaper article about the Lydas' journey from debt despair to financial freedom, I found Marissa's blog (The Budgeting Wife) and her YouTube channel. In her most recent video, Marissa tells in her own words how she and Jacob paid off the $87,000 in student loan debt.

Haha. I noticed that too. But I’m okay with it because I recognize a young blogger learning her talking points. I used to really hammer my own “$35,000 in consumer debt” point, but now I’ve learned to keep it in my back pocket for when it’s needed, not use it all of the time. 🙂

Hey! Thanks for featuring me on your site! I appreacite you sharing our story. ? and thank you for your encouragement!

I liked her video a lot, thought it was super mature! There wasn’t even a hint of creaky voice, which sadly so many young women fall prey to these days:

JD, I’m so happy you’re back and posting regularly. All the posts are compelling. I love reading them all.

Thank you for all your good work.

Good for them! I remember saving for my house at their age. I had just graduated and knew that I didn’t want to pay rent. While it was hard to see my friends striking it out on their own, living in modern apartments in the city, with their new/newer car they bought after getting their first full time job, I don’t envy many of them now, with my $354 mortgage and now 7 years paid off car. I am glad that many of my friends and acquaintances are successful…it truly makes me happy, but some are stuck in a high… Read more »

But that is continuing to live off $16,500 per year for the rest of their lives before inflation even if they continue to invest the remainder of the $500,000 nest egg they built during the 8.5 years, right?