How to compute your REAL hourly wage 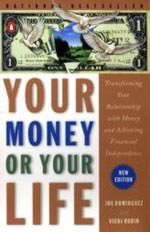 Like many Get Rich Slowly readers, I credit Your Money or Your Life with changing the way I approach my personal finances. This book transformed my relationship with money, and helped me to understand that by spending beyond my means, I was sacrificing a secure future for today's passing pleasures.

One of the book's key insights is that time really is money. Or, approaching it from the other direction, money is time. The authors write:

Our life energy is more real in our actual experience than money. You could even say money equals life energy. So, while money has no intrinsic reality, our life energy does — at least to us. It's tangible, and it's finite. Life energy is all we have.

I know this sounds a little hokey. In fact, when I first read Your Money or Your Life, I dismissed this section as New Age mysticism. That was a mistake. If you can look past the unfortunate terminology, there's a lot of power to this concept. What Dominguez and Robin are actually saying is that time is money.

Your Money or Your Life uses this notion as the foundation to its philosophy of financial independence: time and money are intertwined, and the relationship between them frames all of our financial decisions. To illustrate, the authors encourage readers to calculate their real hourly wage.

We don't earn as much as we think we do, write Dominguez and Robin. You may be paid $15 an hour, but your real hourly wage is less than that. Possibly much less.

Let's say we have a friend named Joe and that he's a plumber. Though Joe hopes to earn $250,000 a year eventually, he currently makes the national average for his profession, or about $48,000 a year for a 40-hour workweek. His nominal wage is approximately $24 per hour.

Ah, but it's not that simple, argue Dominguez and Robin. Joe's real hourly wage isn't $24 — it's something lower.

Think about your job. Think of all the things you do and the money you spend that you wouldn't if you did not work. How long does it take to drive to work? How much does the gas cost? Does your job require that you own a suit or a uniform? Do you have to take vacations to cope with the stress in your career?

Your Money or Your Life lists eight such possible job expenses, including a few which might be applicable to Joe:

Though Your Money or Your Life lists several other ways in which work can cost you money, these are Joe's only expenses. His job costs him about 10 hours per week (or 500 hours per year) and about $107. We'll round it down to $100 per week, so that's about $5000 each year.

Once he's estimated the extra time and money he spends on the job, Joe can compute his real hourly wage. The equation is actually very simple:

Why does your real hourly wage matter? Remember that time is money — literally. When he's making $48,000 a year, it only takes Joe six hours to earn enough for an iPod. That's less than a day's work. But based on his real hourly wage, it would take Joe nearly nine hours to earn the same amount. To earn the money for anything he wants to purchase, Joe has to spend 40% more time working than he thinks he does.

Computing your real hourly wage allows you to see how much you're really getting paid, which can change your perspective. When I first did this in 2004, it had an immediate effect.

At that time, I was spending a lot of money on comic books. After I calculated my real hourly wage and applied the number to my expenses, I was able to see how much time each book was costing me. Was it really worth three hours to buy a collection of Aquaman stories I'd probably never read? For me, the answer was “no”, and I began to reduce my spending.

This “real hourly wage” is also a great tool for comparing prospective jobs, especially when there are a lot of variables. All things being equal, a job with a higher real hourly wage is better.

Now that I've spent several hours of my life energy explaining this concept, later today I'll describe an even better way to look at spending decisions, one that takes into account taxes and living expenses.

Note: If Joe really did earn $250,000 a year, and all our other assumptions remained the same, the iPod would only cost him an hour-and-a-half of his life energy.

How Much Time Does Stuff Actually Cost?

After you've computed your real hourly wage, you can use it to measure how much things cost. An iPod might cost nine hours of work, or a new sweater might cost three. (You don't even want to consider how much a new car would cost…)

But does it really make sense to look at spending this way? Does this really tell the full story? During our discussion last week about unconventional money tips, BW wrote with a better way to look at spending. He points out that not every dollar can be counted as disposable income:

I don't like to think about how many hours I worked for an item I want to buy because it makes the item seem too cheap…A better way to think about it is to subtract fixed expenses from pay first.

He's right. Let's say your nominal pay rate is $24 per hour. You compute your real hourly wage as recommended by Your Money or Your Life and find that it's $17.20. But that's not the end of the story.

From this money, you must pay taxes, purchase housing and transportation, buy food and insurance, and more. If we make the arbitrary assumption that your fixed expenses (including savings) consume 80% of your pay, your actual disposable income would be $3.44 per hour.

This provides a drastic change to the length of time needed to work for a $150 iPod:

Using this example, it doesn't take you just a day to earn an iPod, but an entire week.

Now, I don't recommend that you walk around evaluating every buying decision based on “real wage after expenses” units. While educational, this is likely to quickly drain the joy from living. (You might run the numbers once and examine some hypothetical scenarios.)

However, I do believe it's important to be mindful of your spending. Evaluating your purchases based on the time required to pay for them is an excellent way to become more aware of the actual costs for the things you buy.

The Only Credit Card Guide You’ll Ever Need

Travel on a budget: The all-inclusive vacation

The Best Mortgage Rates of 2018