I recently posted two articles for frugal carnivores: a guide to cheap cuts of beef and another on on how to buy a side of beef. GRS-reader Sally has produced an introduction to eating vegetarian for cheap. Though her tips are for herbivores, many are useful to omnivores, as well.

About a year-and-a-half ago, for health reasons, my husband and I committed ourselves to a mostly vegetarian lifestyle. At home we eat entirely vegetarian; when we eat out we allow ourselves to choose meat. It's also a priority for us to avoid the pesticides in non-organic produce and the hormones that come with non-organic dairy products. Here's how we eat a ton of fruits and veggies at a fraction of the price you might expect. 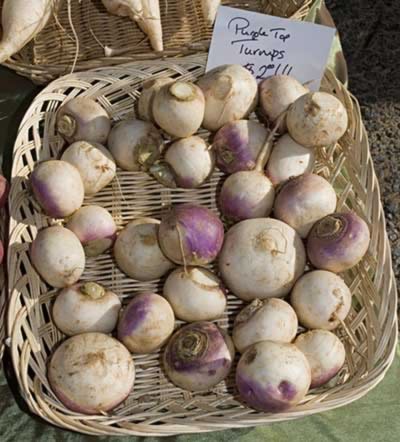 Our top strategy is to eat locally-produced foods as often as possible. (Actually, eating locally is a priority for us based on both our physiological needs and the need for Americans to reduce oil consumption. Produce at the grocery store has traveled, on average, 1500 miles to reach us!) Because we live in an Atlanta apartment with no yard or porch, we are unable to grow anything ourselves except for herbs — so we seek out local farmers. (If you'd care to try an urban garden, this video is a good resource.) Locally-grown foods are sold to us at the peak of their flavor and nutritional value, making them more enjoyable. Buying from local farmers, we are also able to ask whether the foods we are buying have been grown using pesticides. (The organic certification process is expensive for small farmers, so some small farmers may use organic methods but not have government certification for years, if ever.)

There are three primary ways we get local foods: 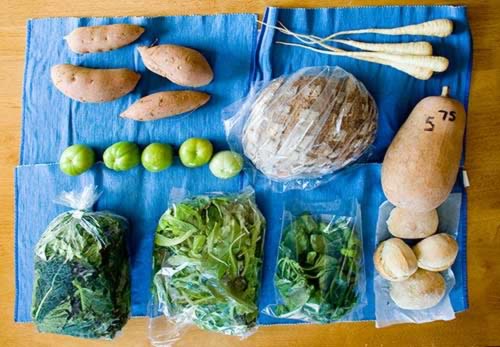 Eating local foods is our top strategy for saving money, but we have several methods of trying to keep our grocery costs reasonable.

In my early twenties, I developed a hormone-linked cancer. In the process of researching different life elements that create or fight cancer, I realized that if I were to lead a long life, my lifestyle of high meat, processed carb, and dairy consumption had to go — and I had to get rid of the pesticides and added hormones in my diet. The switch to a mostly vegetarian, mostly organic lifestyle has decreased my cholesterol level and blood pressure, reduced my weight, and increased the level of my health. It's also possible the shift in my lifestyle has prevented the return of cancer. With the exception of prevented medical expenses, those are benefits that are difficult to measure in dollars. Certainly, though, the value to my quality of life is much higher than the cost of increasing my vegetable intake has been.

Vegetarians of all stripes may be interested in The Veg Blog. If you'd like to grow your own vegetables, be sure to check out my wife's recent GRS article on starting a garden.

There are 32 reader responses to "How to eat vegetarian on the cheap".