How to Fend Off Financial Trolls

Note: It's a rare thing, but it happens once or twice a year: Life has reared its ugly head, and there's no fresh story for you this morning. Instead, enjoy this classic from the Get Rich Slowly archives.

What are financial trolls? In a recent article, Steve Pavlina shared five wealth lessons, the last of which was: financial trolls must be shown no mercy. Pavlina writes:

A financial troll is a close cousin to the forum troll, except that financial trolls strive to sabotage your financial pursuits. These trolls can be internal or external. They're the people who make comments like, “Wealthy people are so greedy. They only care about themselves and will take advantage of anyone to make money.” Financial trolls are also the internal voices that say, “If you make too much money, people will judge you harshly for it. They'll assume that's all you care about.” 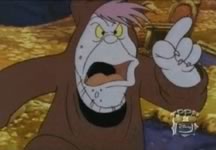 Coping with external trolls
When I started Get Rich Slowly, I wanted people to like and agree with everything I wrote. Any time I received a negative comment, I took time to exchange e-mail with the person who left it. Here's an example of an actual criticism I once received: “I would love [this site] if only the privileged would acknowledged how lucky and privileged they are and how their ‘advice' applies to only other privileged kids.” I tried to carry on a conversation with the commenter, but nothing I could say would satisfy him — in his mind I was a rich jerk and nothing could change that.

I realized that 95% of these people aren't interested in a rational exchange of ideas. They're external financial trolls. They have chips on their shoulders, they're clinging to preconceived notions, or they just want to argue. They're not worth my time. Other examples of behavior you might see in external trolls include:

Defeating most external trolls is straightforward. Because they're not internal, you can usually just remove yourself from the situation. Ignore the troll. Change the conversation. Leave the room. Hang up the phone. Do not argue — as Pavlina notes, any time you argue with a troll, the troll wins. Do not engage the troll.

Conquering internal trolls can be non-intuitive. Most are a product of self-doubt, which is best combated through exercise, discipline, positive social interaction, and a healthy diet. Seriously. The following can also help:

I have much more trouble with internal trolls than I do with external trolls. They're a constant threat.

Know when to seek help
Some trolls are difficult to defeat. What do you do about a spouse who insists on sabotaging your financial security? How do you deal with your own compulsive shopping? Problems like these may require the assistance of a trained professional: an accountant, a lawyer, or a psychologist. The important thing is to deal with them. Until you defeat them, they'll only hold you back, preventing you from achieving success.

The value of a college degree

Why I Love Budget Travel

Do-it-yourself landscaping can save thousands

21 money-saving sites from around the web