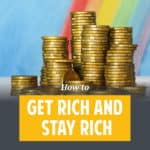 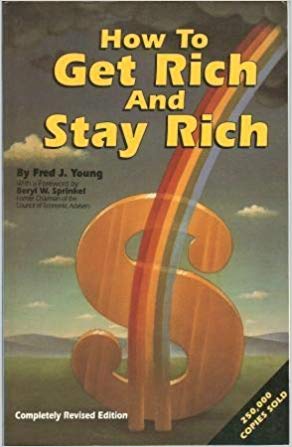 In my ongoing quest to build a library of pre-1990 money books, I recently heeded a reader recommendation to buy and read How to Get Rich and Stay Rich by Fred J. Young. Spoiler alert: I liked it! But I almost didn't read it.

You see, everything about this book exudes scamminess. The title is scammy. The cover looks scammy. The amateurish formatting seems scammy. But the book is not scammy. How to Get Rich and Stay Rich is a marvelous prototypical book about early retirement. I enjoyed it.

Fred J. Young, the author, was born and raised in rural Tennessee during the 1910s. His family was poor, as were all of their neighbors. Young decided he wanted to do something more than be a farmer, so he left Tennessee to become a lawyer. After military service, he worked for Harris Bank in Chicago, where he spent three decades advising wealthy clients.

How to Get Rich and Stay Rich

“For 27 years, I worked in the Trust Investment Department of the Harris Trust and Savings Ban in Chicago, Ill.,” Young writes at the start of the book. “Most of my time during this period was spent helping rich people 1) stay rich, and 2) get richer.”

“During those 27 years of working with rich people, I made a number of observations about getting rich, being rich, and staying rich, and about the difference wealth makes. I am delighted to share those observations with you in this book.”

Here are Fred J. Young's eighteen pieces of advice about how to get rich and stay rich:

To some extent, Young's advice resembles other lists of wealthy habits that I've mentioned in the past. The difference, I think, is that he's not trying to be prescriptive like some financial gurus. He's not saying, “You must do these things to get rich.” Instead, he's trying to share what he's personally observed during decades of working with the wealthy. His list is descriptive rather than prescriptive.

How Rich People Get Rich

The bulk of How to Get Rich and Stay Rich consists of short (one- to four-page) chapters with lots of entertaining anecdotes. There's one exception. Nearly half of the book — 72 pages! — is devoted to the three ways to get rich. And of those 72 pages, 70 of them are about how to invest in order to build your wealth.

Young says that most of the rich people he knows got rich from one of four vehicles: real estate investing, business ownership, the stock market, or savings accounts.

He says that sure, some folks have put a lot of money into collectibles, such as baseball cards or comic books. But he's never seen anyone get rich that way. (And I'd note that the whole “getting rich from a savings account” thing was probably a historical accident based on when Young was working and writing. Nobody has been getting rich from savings accounts during the last decade!)

“Of all the rich people I know,” Young writes, “more of them got rich from the ownership of real estate than any other means.” These folks tend to build wealth in one of three ways:

Young spends a lot of time discussing how people get rich in the stock market. While his advice about investment psychology is still relevant, a lot of his specific information about the stock market is outdated by our standards. He's very much from the era of picking individual common stocks. He mentions mutual funds in passing, but never dwells on their advantages. And he never mentions index funds, which were a relatively new invention when Young was writing and lecturing. (Here's more up-to-date advice on how to invest.)

I'll be honest. I was not expecting to like How to Get Rich and Stay Rich nearly as much as I did.

But this book is not scammy.

This book is built around a single principle: Spend less than you earn and invest the difference in something that you think will increase in value and make you rich. That's about as far from scammy as you can get!

I should point out, however, that while there's plenty of good advice in these pages and lots of amusing anecdotes, there's very little polish. This isn't a slick book from a slick operator. It reads more like homespun advice from your favorite uncle. Depending on what you want from a book, this could be a pro or a con. To me, it's a pro. (Young reminds me of my friend Jim Collins.)

Take a look at the following eleven-minute video, in which the author describes meeting a young Warren Buffett at an investment conference in 1958:

This video is fun in its own right, but I like that it captures Young's delivery and style perfectly. If you enjoy this (as I do), then you'll probably enjoy How to Get Rich and Stay Rich.

I feel like How to Get Rich and Stay Rich is the sort of book I might give a niece or a nephew. It's a good book for a young person just starting out in life — provided that young person has a serious mind. (No book is ever going to help a kid who isn't ready to heed the advice, right?)

It's also a great choice for anyone who has decided to get serious about money but doesn't know which modern financial gurus to trust. The advice here is timeless (although some of the investing info is out of date).

And if you're a money nerd like me? Well then, you'll want to read this book simply because it's fun. The author is a product of the first half of the twentieth century, and his writing shows that. That's part of the charm.

There are 15 reader responses to "How to get rich and stay rich".