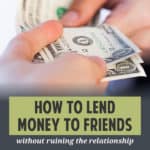 Lending money to friends and family is a generous act — one that could easily backfire and even ruin your relationship. Most of the time when someone is considering a loan to a family member, I think, “Don't do it.” There can be other ways to help. But when it's someone you care about, logic only plays one role in the decision-making process.

Not too long ago I was in this situation. (I want to share it, but obviously I also want to be sensitive about revealing personal information, so I'm changing names and other minor details.)

I've been friends with Megan for almost 10 years. In that time, she's never had much money, but she also never asked for so much as $5. Last year, she and her boyfriend rented an apartment. A month later, he lost his job, and she had to go on medical leave. He couldn't find another job, and she had tried to return to work but her doctor wouldn't sign the medical release (it was still too early). To complicate things, they had a child. I knew my friend, and I knew she was only asking for help because of her child. They were behind on rent, and although she had just started back at work, she wouldn't see a paycheck for another two weeks.

I don't believe in loaning money most of the time. It's not that I don't want to help make things better, I just think that in most situations it's a temporary fix. If someone can't make a house payment this month, what's going to change next month? In many cases, money troubles are a sign of ongoing issues and habits. Also, it can strain your relationship. If your brother owes you $1,000, and he buys a Harley motorcycle, you can't help but wonder where he came up with the cash when he hasn't even paid you back. Then things get icky.

The Right Way to Lend Money to Friends

I ended up giving my friend the money. I felt that this was a situation where she just plain fell on some hard times. The job situation couldn't have been predicted. They thought they had two incomes to cover a very modest apartment. There wasn't a sufficient emergency fund to cover situations like this. She was unable to work, and now that she could, she had to wait for a paycheck.

But I was careful about how I did it, both to protect my interests and our friendship.

Here's what I did:

I've read several articles that advise drawing up a contract when lending money to friends or family. While it seems like a good idea, what will you really be able (and willing) to do to enforce it? If your friend or relative doesn't feel a responsibility to pay you back, a piece of paper isn't likely to change that.

Not Always a Happy Ending

Unfortunately, my friend continued to have money problems, and eventually she was evicted. Her boyfriend was fired from the job after a few weeks. While I feel for her, that's the extent of how much I can help her — at least financially. I don't regret our decision to help out, and though the money is gone, our friendship has remained intact, which was my primary concern when she asked for help.

Have you loaned money to family or friends? How did you do it? What went right? What went wrong? Do you have any advice for others in this situation? (Or, if you've borrowed money from friends or family, what can you tell us from that side of the fence?)

There are 179 reader responses to "How to lend money to friends (without ruining the relationship)".