I had breakfast at a local diner the other day. Over my blueberry pancakes, I eavesdropped on the next table over. (It wasn't difficult — these folks were loud.)

Eight people from the wedding industry had gathered to swap hints, tips, and stories. They talked about networking, about wedding expos, and about dealing with problem customers. They also talked about some of the financial aspects of their business.

“I was really worried about how this economy was going to affect us,” said one woman. I think she was a wedding coordinator. “But it only seems to be hurting the venues.”

“Yeah,” said the guy across the table from her. “People are getting married in their parents' back yard or on their grandparents' farm. They're spending less for the location, but not on anything else.”

“Do any of your clients ever try to dicker?” asked one man, a D.J..

“You know, try to bargain on the price,” he explained.

Everyone answered at once: “A few.” “Some do.” “Once in a while.” The consensus was that a small number of couples asked for discounts on wedding services.

“What do you do in that situation?” asked the D.J. Most of the people admitted they'd lower their prices to get the job.

“I say I'll give them a discount, but only if they commit right now,” said the wedding co-ordinator. “I won't do it if they're just going to call around trying to play us off each other.”

Think about that: If you're spending a lot on other aspects of your wedding, this disc jockey will ask for more than he would normally. But if you ask for a discount, he'll give you one. Basically, he'll charge you as much as he thinks you can pay. And the other folks at the table would grant you discounts too — if you asked for them.

It never hurts to ask for a lower price. 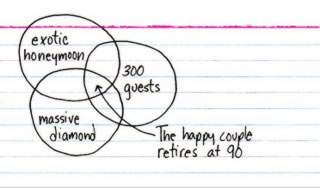 via Indexed, used with permission

There are 62 reader responses to "How to Save Money on Your Wedding: ASK!".