This guest post is from Nickel, author of Raising4Boys.com and FiveCentNickel.

I recently received an e-mail from a reader asking about the “real” cost of raising kids. In short, she's heard a lot about the high cost of raising kids, and was wondering if it's really as bad as people make it out to be. More than anything, this question seemed to have been born out of angst over what it takes to be financially “ready” to start a family.

To be honest, I've never really kept tabs on exactly how much having kids has added to our expenses. My wife and I are, however, in the relatively unique position of having four kids (all boys). Thus, I thought I'd share some insights gleaned from our experiences with starting a family on a shoestring.

First, a bit of background so you'll have an idea of where I'm coming from…

We had Son #1 (currently nine years old) when I was in graduate school and my wife was working full time. We never really considered daycare to be an option so, when he was born, my wife scaled back to half-time and we made do on her half-time salary (plus benefits) and my stipend. That meant roughly $27k in gross income and splitting shifts such that one of us was available to care for our son at all times. My wife worked early mornings while I was at home, and then shortly before lunch we swapped out so I could do my thing while she was at home. I came home late in the evening, and the next day we would start all over again.

After graduate school, we moved, I took a new job, and we added Sons #2 and #3 (currently seven and five years old). During that time, my salary was in the $25k-$35k 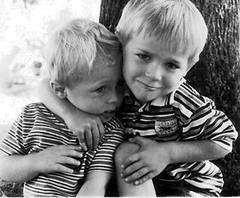 range and my wife started staying home full time, which she still does to this day. While we weren't making much more than our previous combined income, we felt like we were living large because we could afford to have her stay home full time.

After about three years, I was offered a job that represented a big professional step forward and which also roughly doubled my income. We moved, bought a house, and not too long thereafter we added Son #4 (currently two years old). Finally, a bit over a year ago, we moved yet again. Once again, this was a totally voluntary move that resulted in a new (and better) job along with a nearly 50% raise.

As you can see, we've faced fewer and fewer financial constraints over the years. In fact, we now have our feet squarely beneath us, and are in a position to face pretty much whatever comes our way. Nonetheless, things were very tight when we first decided to start a family. So… How did we make this all work, especially back in the early days?

We kept our living expenses really low. Perhaps the biggest thing we did in this vein was to live in university-owned family housing when we were just starting our family. It was no great shakes, but… Where some some people saw tiny apartments with cinderblock walls, we saw home. It was an incredibly convenient location on the edge of campus that allowed us to walk and/or bus to a lot of places, and since we didn't have much space, we didn't have to pay much to heat or cool it, and we also couldn't buy a lot of extraneous stuff.

We avoided childcare. As I noted above, we never really considered childcare to be an option. This wasn't really a financial decision, but it had a nice financial side effect… Since neither one of us was making very much money, putting our son in childcare would've been a major financial hit. While I realize that childcare is unavoidable in many cases, we were fortunate enough to be able to work around it. Sure, our non-overlapping work hours meant that my wife and I had to sacrifice in terms of time together, but we made it work.

We didn't break our budget buying baby stuff. Rather, we combed the flea market and local garage sales for barely worn bargains. And no, we weren't scraping the bottom of the barrel — this was nice stuff. Nicer, in fact, than we would've been able to buy if we had bought everything new. And since babies rarely wear things out, our flea-market finds later became hand-me-downs. In many cases, we threw down pocket change in return for nearly-new, high quality, name brand outfits that survived all four of our boys. We even found a barely used crib in the classified ads that served us well through all four kids, and which we were ultimately able to sell for nearly as much as we paid for it.

We minimized our medical expenses. When Son #1 was born, our health insurance provided a stipend for well-child care. The good news is that there was no deducibtle and no co-payments. The bad news was that it was a fairly limited amount of money, and once it was spent you were on your own for the rest of the year. There was more than enough to cover the regular well-baby appointments, but vaccinations were an entirely different ballgame. Had we opted to have our son vaccinated by the pediatrician, we would've blown through our well-child funds in no time. Instead, we got the orders from the pediatrician and then headed for the county health department. The beauty of the health department was that they offered a veritable buffet of vaccines for one low price. For $20 you could get all the shots you needed in a single visit.

We made smart choices when it came to routine baby expenses. For example, my wife breast fed all of our kids for at least a year. Not only does this save you a good bit of money on formula, but there are numerous health benefits, as well. And on those rare occasions where we needed to buy formula, we went with Parent's Choice (the Wal-Mart brand, which is every bit as good as Similac and Enfamil). Similarly, we tried various brands and quickly came to realize that Sam's Club diapers worked every bit as well as name brand diapers. Sure, there were stages that each of our kids went through where a generic diaper couldn't “contain” them. But for the most part, the Sam's version worked great and saved us a ton of money. Of course, we probably could've saved even more by using cloth diapers, but we didn't have convenient laundry facilities, nor did we have the inclination to take it that far.

We steered clear of debt. Debt's a funny thing in that it's both a byproduct of and a contributor to living beyond your means. Since we lived a relatively frugal lifestyle early on (and continue to do so to a point), we were able to stay out of debt, and thus never faced the attendant finance charges, late fees, etc. In fact, aside from our mortgage, we've never carried any debt. How? Simple… If we couldn't afford to pay for something, we didn't buy it. Beyond the financial savings, this also saved us an awful lot of stress.

The bottom line here is that it is possible to start a family without breaking the bank. In fact, if you were to wait until you're financially “ready” to have kids, complete with all the trappings that new parents often view as absolute necessities, you'd probably never start a family.

There are 83 reader responses to "How to Start a Family Without Breaking the Bank".